Michael Brown, 47, of Waldorf, pleaded guilty to a federal bribery charge and faces up to 10 years in prison.

A man whose job was giving drug tests to people on federal probation in Maryland admits turning positive results into negatives in exchange for cash.

Michael Brown, 47, of Waldorf, pleaded guilty to a federal bribery charge and faces up to 10 years in prison.

According to his plea agreement, Brown admitted accepting the bribes from at least December 2018 through February 2019.

The first time Brown met with the undercover agent was last December at the federal contractor where Brown worked in Camp Springs.

The officer warned Brown that the urine sample he was about to give would likely test positive. Brown said he would “take care” of the officer. The officer expressed appreciation to Brown and left $100 on a bathroom sink.

Two days later, the officer once again visited Brown and turned in a urine sample, but Brown told the officer to pour it out, saying, “If it was dirty the other day, it’s going to be dirty today.” The officer asked if Brown “needed anything,” and Brown again accepted a $100 bribe.

According to the plea deal, during a third meeting in February, Brown accepted a $150 bribe without requiring the officer to submit a urine sample.

Brown is scheduled to be sentenced on Aug. 28. 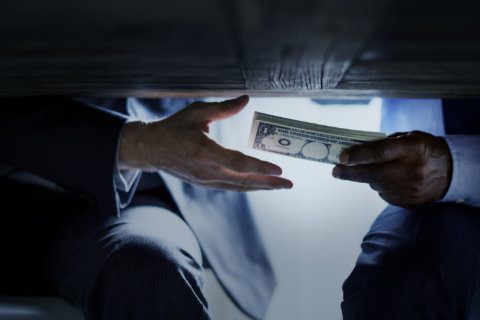