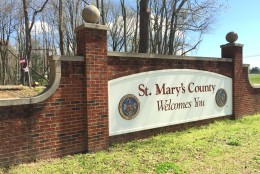 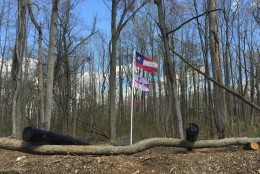 MECHANICSVILLE, Md. — Several familiar and not-so-familiar Confederate flags are getting some attention in southern Maryland.

Two flags, including the controversial Confederate battle flag, recently were put up near the large sign along the side of Md. Rt. 234 welcoming visitors into St. Mary’s County from neighboring Charles County.

The flags could be seen about 40 feet behind the sign.

“We had not received any official complaints until last week, when someone had contacted a local radio station and made us aware that the flag was actually up there,” St. Mary’s County Commissioner John O’Connor says.

O’Connor went out to the site and determined that the Confederate battle flag was on private property. He couldn’t force any one to take it down.

“It’s not about like, dislike, heritage or hatred on something like this,” O’Connor says. “It’s about the Constitution and the First Amendment. It doesn’t matter what flag that person is flying. That’s private property and they have every right to fly whatever flag they may want to fly.”

The flag was put there by the owner of Budds Creek Motocross Park, Jonathan Beasely, who says he’s been flying lesser-known Confederate flags on his property for 30 years.

“Nobody ever said a word because nobody knows what it is, except the people who are in the Sons of Confederate Veterans or knowledgeable with the flag,” says Beasley, who also owns Potomac Speedway, speaking of the lesser-known flags.

Beasley says that, as a Civil War historian, he was angry that the flag had been desecrated by Dylann Roof, the white man charged in last year’s deadly shootings at a black church in Charleston, South Carolina.

He says he was also angry over an effort to get extra security for a concert planned on his property April 22–April 24, called Buddsfest.

Beasley says he wanted to add a stage with live go-go music to the lineup.

“Police departments that provided security for me for 30 years pulled out after the words ‘go-go’ came out of my mouth. That’s what it was, black and white,” he says.

He added: “If they’re going to brand me as a rebel, I’ll show them I’m a rebel.”

Beasley says he thinks he’s resolved the security issue, but said there will not be a stage featuring go-go acts this year.

Since O’Connor’s visit, Beasley has swapped out the Confederate battle flag for a different flag.

Beasley says he understands that the battle flag is interpreted as being associated with slavery. He says he will never fly it on his property again.

“I consider our history, with regards to the way the blacks were treated as slaves, as embarrassing,” he says.

That said, he plans to continue flying other Confederate flags. When WTOP visited the area this week, the first official flag of the Confederacy, known as the “Stars and Bars,” was being flown where the Confederate battle flag had been.

Below it was Maryland-born Confederate Army Gen. Bradley T. Johnson’s headquarters flag, which has a red cross on a white field.

The design can be seen in the Maryland state flag that’s flown today.

“I believe in sharing our history,” Beasley says.

Charles Co. Sheriff’s Office is keeping an eye on some commissioners’ homes 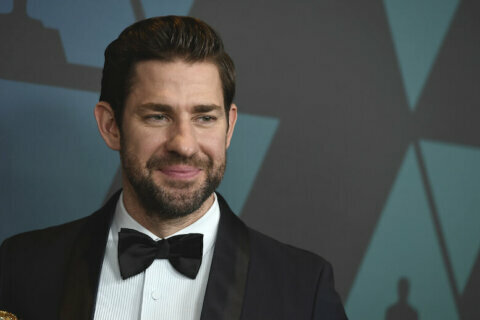 Maryland couple gets married with help from ‘The Office’ cast