If you haven't shopped for a new ride lately you might be surprised that Kia has been making waves, offering competitive vehicles at a good value. But a large seven- or eight-seat crossover was missing from its lineup until now. See photos.
Listen now to WTOP News WTOP.com | Alexa | Google Home | WTOP App | 103.5 FM
(1/10) 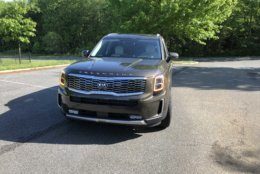 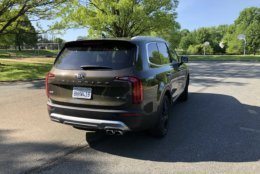 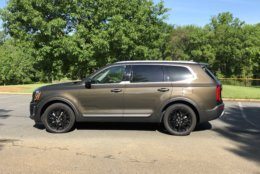 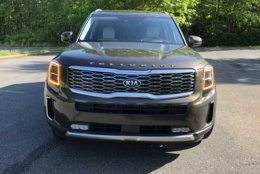 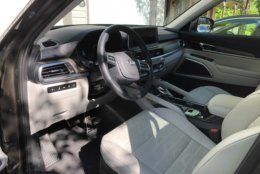 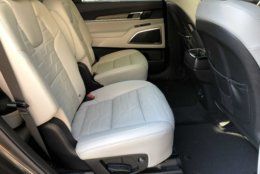 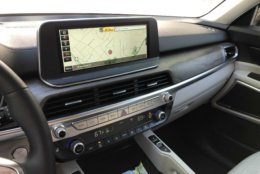 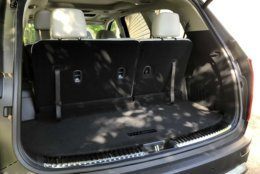 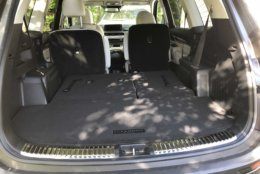 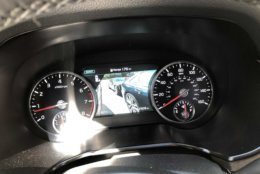 If you haven’t shopped for a new ride lately, you might be surprised that Kia has been making waves, offering competitive vehicles at a good value. But a large seven- or eight-seat crossover was missing from its lineup until now.

Kia seems to be taking the same approach with the 2020 Telluride, especially if you choose the top-of-the-line $46,860 Telluride SX model.

That price is less than a top-trim level Chevy Traverse or Honda Pilot. It might cost less but you don’t notice it in the interior as it’s near luxury-class nice with a premium look and feel.

My tester came with the Prestige package that adds Nappa leather seat trim — a step above in quality than most of the competitors in this size class.

The front and second row seats are heated and ventilated. The front seats, and especially the 12-way power adjustable driver’s seat, make it easy to find a comfortable seating position.

Climbing through the middle of the second row is easy for children or small adults. The second row seats also tip and move forward for easy access. Or fold all the seats and get plenty of storage for large bulky items. The lift to get cargo inside is pretty high for this big ride.

The SX trim level also comes with a large power sunroof and a large rear fixed sunroof in the back.

A simple-to-use Nav with a large 10-inch touch screen and an around-view monitor are nice features and help out with parking and extra awareness in and around the vehicle.

The new Kia Telluride isn’t trying to hide its larger size and it seems to prefer the style of a rough and tumble SUV over a rounded carlike crossover.

The Telluride sits up high and is boxier than many of the larger three-row crossovers in its class. While it might be somewhat boxy, it’s not boring to look at. A huge grill is almost necessary in this class and the new Kia doesn’t disappoint. Its grill takes up most of the front end. The LED lighting is a modern touch and the daytime running lights look cool.

My tester came with a Dark Moss paint color that switches from dark green to brown depending on the light. Large 20-inch black wheels are not as rough and tough looking as the rest of the Telluride. This Kia has a lot of glass around the entire vehicle and even continues to the hand-free rear hatch. Stand behind it with the key on you and it pops open in an instant.

Hitting the road in the 16.5-feet long 2020 Kia Telluride takes a few minutes to get used to if you’re coming from a smaller ride.

Once on the road, the Kia seems to drive a little smaller than it is, except in tighter spaces where your mirrors and the around-view monitor help out. The Kia is a quiet cruiser that handles most bumps without much complaint; only a few times did I notice the suspension get a bit jarring over larger bumps where they are replacing pipes on Maryland state Route 29. The steering is direct and it turns well for a tall crossover. In easy commutes and highway driving, it’s more like driving a luxury vehicle than a Kia. Power comes from a V6 with 291 horsepower and a smooth eight-speed automatic.

I filled five of the seats and the acceleration was good. It does seem to make most of its power higher in the rev range. Fuel economy was on par for a large three-row crossover at 19.8 mpg; the sticker said 21 mpg.

The new Telluride has many safety features like the usual blind-spot and cross-traffic and lane departure warning. This Kia also comes equipped with collision avoidance and smart cruise control with stop-and-go, which is bit jerky at times. A few new safety features, like rear occupant alert lets you know if there is someone unattended in the back seat. The safe exit alert monitors the surroundings, not allowing the doors to open into oncoming traffic if it appears unsafe. The driver speak allows you to converse with those in the third row in a normal voice and eliminates the need to repeat yourself over and over.

Kia is making the kind of vehicles people want to buy and not just buy because they’re cheaper with a long warranty. This new 2020 Telluride SX is a large crossover that straddles the line of luxury and offers a huge value for your buying dollar.