The 570S Spider is tempting. So go ahead and trade in that sports car and move into a usable exotic with a three-year unlimited mileage warranty to start and maintenance cost that won’t break the bank.
Listen now to WTOP News WTOP.com | Alexa | Google Home | WTOP App | 103.5 FM

WASHINGTON — McLaren 570S Spider makes an impression on onlookers and even more so on drivers.

McLaren, a name that’s famous in Formula 1 racing, has really been making waves with its road cars. Its Sports Series is entry-level into the world of McLaren. I drove the newest McLaren 570S Spider, a convertible.

The 570S Spider has a hard retractable top, but other than that, it’s back road or racetrack ready. Hit the start button and twin turbo V8 fires and snarls with a nice, loud bark before settling into a more hushed idle. My car sounded very good thanks to the $5,760 optional Titanium SuperSports exhaust — which is totally worth it.

Another must-have is the Vehicle Lift at $1,560 that raises the front end up, making driveways, garages and speed bumps doable and scrape-free. The side mirrors are a departure from the old, exotic ways; they actually show what’s beside you.

So once you get used to being lower than everything else out there, it is easy to drive. It’s both automatic and manual — you choose. Choose manual and you are responsible for every up and down shift of the seven-speed dual clutch transmission. Shifts go from easy to brutally fast when you are really getting into it. This is the least powerful McLaren made for the U.S., but it’s very fast with around 570 horsepower from a 3.8L twin turbo V8. There seems to be a bit of turbo lag in Normal mode but disappears in the Track mode, where the transmission is in its most hard-core mode. The suspension is adjustable ranging from Normal to the stiff Track mode, where you feel more of the bumps and road. 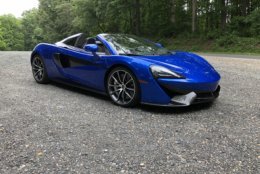 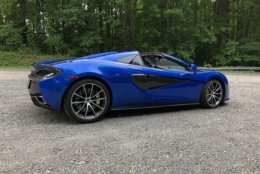 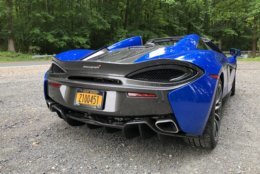 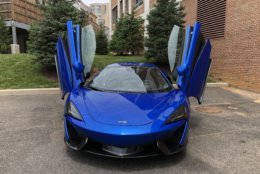 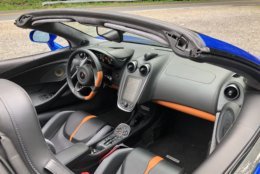 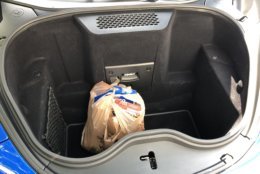 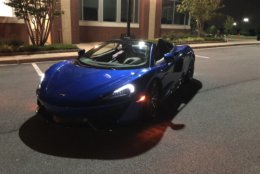 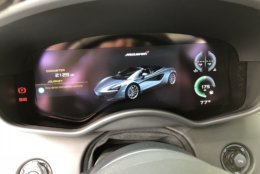 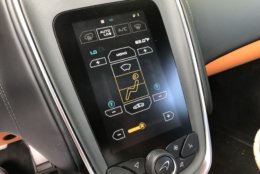 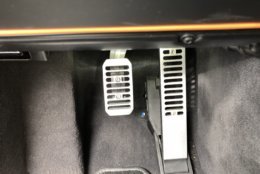 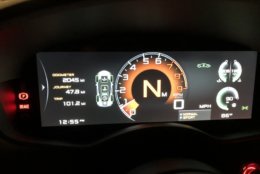 Handling is something else — with limits that can’t be tested on the street without the threat of jail time. The gas and brake pedal are heavy and the brakes have a bit of travel before they bite — and do they ever! The large Carbon Ceramic brakes stop you on a dime and offer some change back.

The looks are what an exotic is all about. The McLaren 570S Spider is low and wide with futuristic Space Age looks. Those cool doors that flip up to open ‘wow’ people as much as the style of this car. Allow an extra 10 minutes when leaving or arriving, as this car is a magnet for attention.

The body is very purposeful with cut outs in the doors that draw air into the engine and an enclosed under body panel that has a rear diffuser that helps keep the car planted on the ground. The $4,320 optional Vega Blue paint looked amazing on the car. I would choose it. LED lighting is taken to the next level with the rear taillights that are just a small strip.

The inside is as stylish as the outside and it’s very easy to use. The seats are Nappa leather and are more comfortable than expected. There are simple manual controls for the seats. Taller drivers and riders might find it a tight fit. The pedal box isn’t large either.

The Portrait screen works well for navigation. However, the radio’s interface screen sometimes takes a second to react. The center console has most of the knobs and buttons for the transmission and other car settings. It’s straightforward and simple.

The controller for the hard top is switch-operated. It folds away in about 15 seconds. Noise is in check at normal speeds and with the top up you can carry on a normal conversation at highway speeds. The entry and exit of this low exotic is really the only challenge for some and not always graceful.

The McLaren 570S spider is an exhilarating exotic. So where do you sign up? There is a new dealer, McLaren Sterling, which I had to see. It’s an impressive showplace filled with new and used, colorful McLarens. It’s also the first and only African American-owned McLaren dealer in the country.

The 570S Spider is tempting. So go ahead and trade in that sports car and move into a usable exotic with a three-year unlimited mileage warranty to start and maintenance cost that won’t break the bank.