WASHINGTON — The Grand Cherokee Trackhawk is a head scratcher for some but a boon to power-crazed folks who need the space and ability of an SUV but can’t stand the thought of driving a slow-moving machine.

The other powerful SRT Grand Cherokee wasn’t slow with its 475 horsepower, but this new Trackhawk is in a league by itself for now; it’s the most powerful SUV on the market. You might remember hearing WTOP’s John Aaron and I tooling around and laughing like loons at this crazy machine.

So, what is it like to spend more time with this Jeep and use it as a family car?

Always ready to take one for the team, I volunteered to drive this fully loaded $99,965 2018 Jeep Grand Cherokee for a week. I still have my license after 350 miles in this beast. The power is insane. 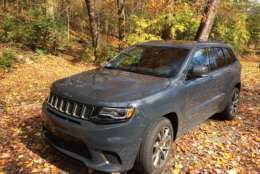 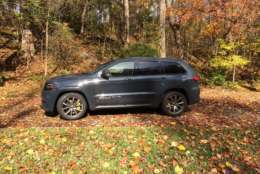 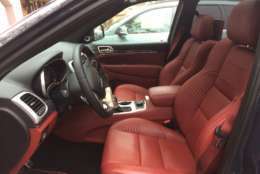 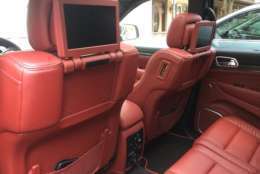 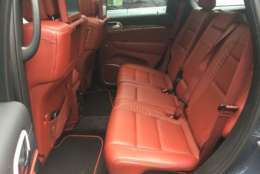 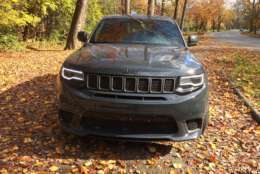 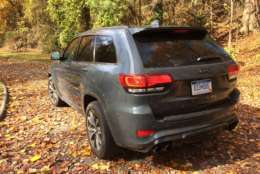 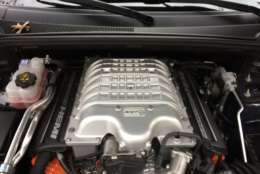 Unlike the two rear wheel drive Dodge vehicles that have the same supercharged 707 horsepower engine, in the AWD Trackhawk, all the power makes it to the ground. This large, loaded-with-luxury SUV does 0-60 mph in 3.5 seconds, leaving most sports cars in the dust. The acceleration throws you back in your seat and makes child passengers say, “Do that again!” Huge Brembo brakes do a good job of quickly slowing down this fast SUV.

Fuel economy is lacking, but I don’t think you buy a 707 horsepower SUV expecting much. I managed just 10.3 mpg for my week of driving, missing the 13 mpg on the sticker. The ride is a bit more firm than other Grand Cherokee models but likable for what the improved suspension has to deal with because of the power.

While not a Porsche SUV, it handles better than most people would ever push their SUV in a curve. You do feel more of the bigger bumps, which have more to do with large wheels and tires with shorter sidewalls. The sound this puts out made me drive with the windows and sunroof open when I could.

You can buy the Grand Cherokee for around $87,000 and get nicely equipped interior. Or, you can choose the tester I chose with a signature leather-wrapped interior that really makes a jump in luxury. Laguna leather performance seats keep you comfortable; the quality and feel are first rate. The leather is everywhere on interior panels and even lower down in the cabin where you usually don’t see.

Front seats are heated and ventilated. The steering wheel heat is hot and good on those cold days, though you have to go through a separate menu to access the settings. There is plenty of head and leg room in the rear, but the large, optional dual-pane sunroof cuts down on headroom a bit.

The Uconnect system is easy to use and the 8.4-inch screen is large enough. It’s Apple CarPlay and Android Auto capable. An optional upgraded audio system has 19 speakers and subwoofer good for 825 watts for loud, yet clean audio.

Outside, the Grand Cherokee Trackhawk flies under the radar for most people. Yes, it looks like it sits lower and it looks a bit more menacing than other Grand Cherokee models, but it doesn’t look like a 707 horsepower car and I like that. There are some badges that say “Supercharged” and the hood has some functional vents as well as large yellow brakes that peek behind large 20-inch wheels, but nothing that screams 707 horsepower. It has a distinctive color named rhino clear coat that seems to morph to different colors depending on the lighting. In the back, the quad tip exhausts are large and seem to be megaphones when friends and strangers ask you to start and give it a little rev.

If you want bragging rights of having the most powerful SUV around, then you need to be driving a 2018 Grand Cherokee Trackhawk. The 700 horsepower on tap induces giggles and grins from adults. We are in the golden age of horsepower and now, the family SUV joins the fun.

You just have to convince your significant other that this pricey Jeep is what you need. It’s the car crazy people drive.