The nonprofit Brewers Association has released its inaugural list of the 50 fastest growing small and independent craft brewing companies of 2017, and three of them are Virginia craft brewers.
Listen now to WTOP News WTOP.com | Alexa | Google Home | WTOP App | 103.5 FM

WASHINGTON — The nonprofit Brewers Association released its inaugural list of the 50 fastest growing small and independent craft brewing companies of 2017, and three of them are Virginia craft brewers.

While the Boulder, Colorado-based association won’t release specific volume details on its members’ 2017 production and sales until May, it does note median growth from 2016 to 2017 for the top 50 breweries was 216 percent.

Vanish Farmwoods Brewery in Leesburg, Virginia, ranks No. 25 on the list of 50 fastest-growing craft brewers in 2017.

Vanish Farmwoods grew to 62 employees in the two years since it opened, and it says it is adding more production capacity and a barrel-aging facility to its farm.

“One of the things that is significant for us is that over 90 percent of our beer sales is consumed on-site in our farm tasting room instead of through distribution,” said Vanish Farmwoods owner Jonathan Staples.

Vanish Farmwoods is on a 61-acre farm and has two separate tap rooms, three indoor bars and one outdoor bar. It also has more than 30 taps and live music on weekends.

Fair Winds Brewing Co. in Lorton, Virginia, is No. 47.

Topping the list of fastest-growing craft brewers in 2017 is CraftRoots Brewing Co. in Milford, Massachusetts.

The 50 companies on the Brewers Association’s list represent 5.5 percent of craft’s growth by volume, and include eight brewpubs, 40 microbreweries and two regional craft breweries.

“With 5 percent growth overall for small and independent brewers in 2017 and microbreweries and brewpubs delivering the majority of that, we wanted to spotlight some of the breweries driving that growth,” said Bart Watson, chief economist for the Brewers Association.

“As the growth base for craft becomes more diffuse, these fast growing brewing companies illustrate that a diverse set of success stories still exist.”

Here are the 50 Fastest Growing Craft Breweries in 2017 (click to enlarge): 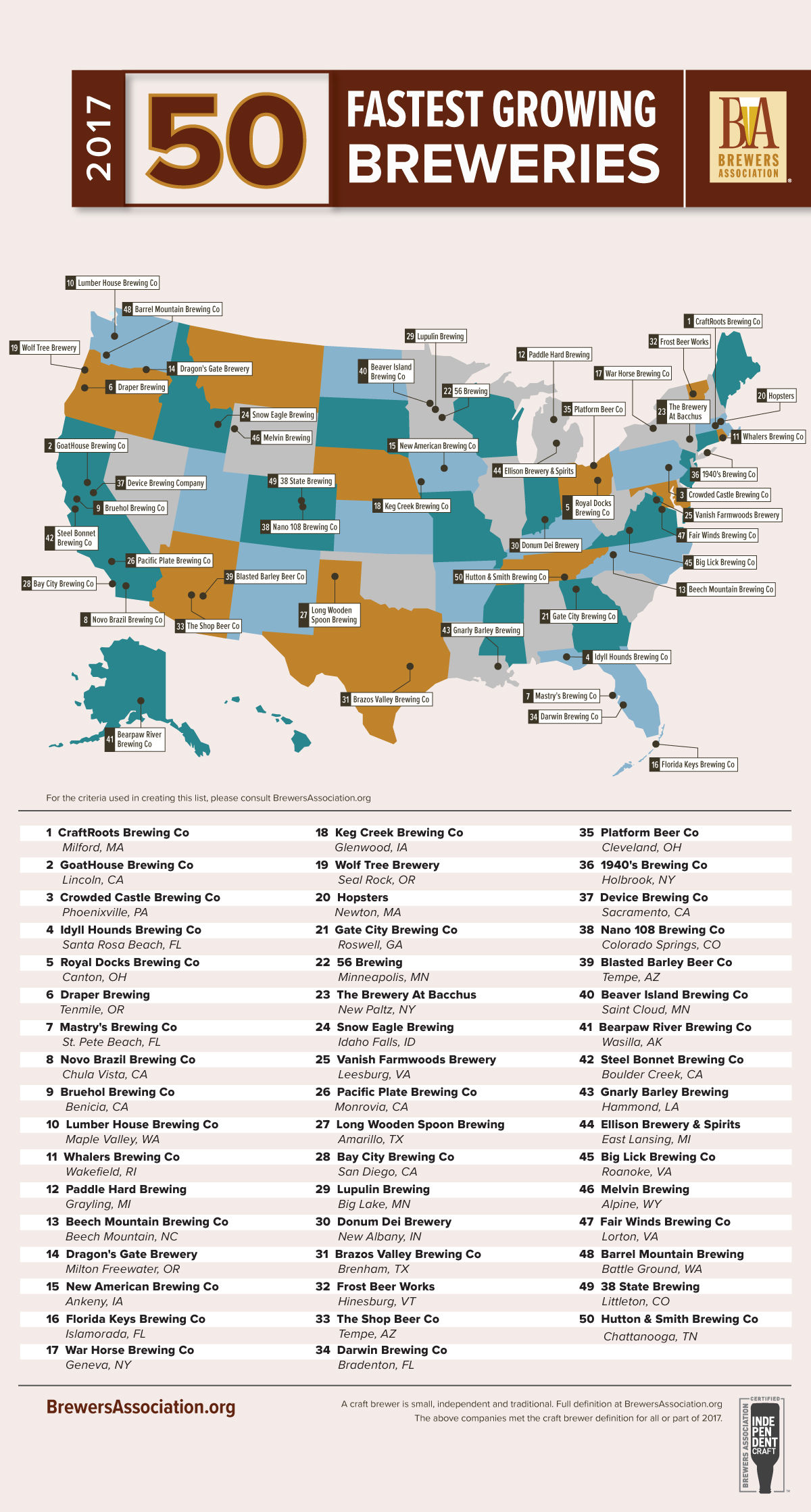