The Bureau of Alcohol, Tobacco, Firearms and Explosives stated Wednesday that the cause of a two-alarm fire that erupted within a vacant building on Baltimore's S. Stricker Street had been classified as incendiary in nature.
Listen now to WTOP News WTOP.com | Alexa | Google Home | WTOP App | 103.5 FM
(1/5) 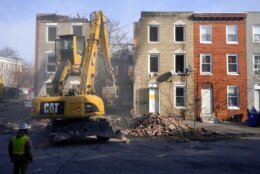 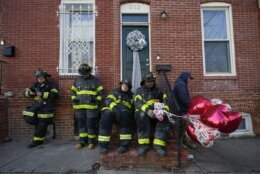 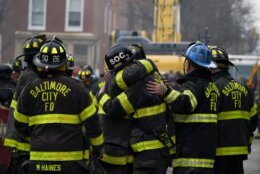 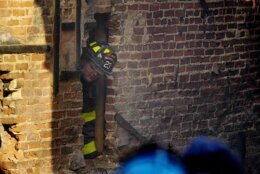 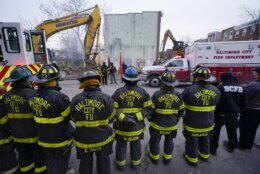 Investigators have determined that a blaze and partial collapse which killed three Baltimore firefighters in January was “incendiary,” deeming their deaths a homicide.

The Bureau of Alcohol, Tobacco, Firearms and Explosives said Wednesday that the two-alarm fire that erupted within a vacant building on Baltimore’s S. Stricker Street had been classified as incendiary in nature.

“ATF currently defines incendiary as a fire that is intentionally ignited or spread into an area where the fire should not be, and involves a violation of federal, state, local or tribal law,” the agency said. “Incendiary fires may also include fires that are not necessarily intentional, but directly result from other criminal activity.”

Separately, the Baltimore Police Department said the three firefighters’ manner of death had been determined as homicide. The State Medical Examiner’s Office found they had died from injuries sustained while attempting to extinguish the fire.

“We would like to thank members of the community who contacted ATF and our partners with information, as well as for their outpouring of support for Baltimore City Fire Department and the loved ones of these fallen heroes,” ATF Baltimore Special Agent in Charge Toni M. Crosby said in a news release.

“The incendiary classification is an important step forward in this investigation. We will continue to work alongside our partners to ensure a complete and thorough investigation is completed.”

Flames broke out just before 6 a.m. on Jan. 24 in a three-story vacant home on 205 S. Stricker Street, leading to a partial collapse which pinned four responding firefighters under debris.

Federal investigators identified a person of interest after publishing surveillance footage of a man walking near the site of the fire.

On Wednesday, Baltimore police said city, state and federal law enforcement were continuing to investigate the case and did not release information about the individual or possible charges.