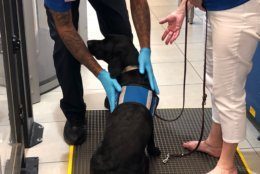 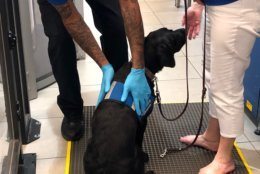 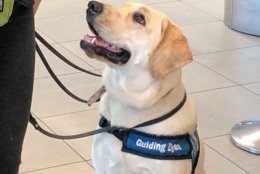 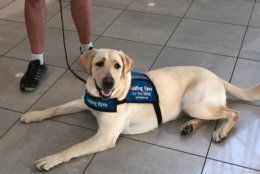 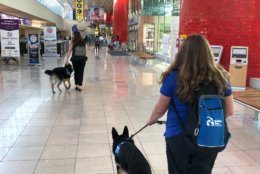 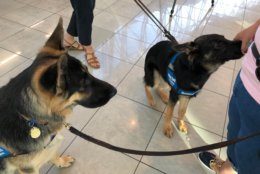 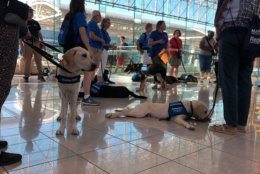 Trainers from around the D.C. and Baltimore area, who raise puppies for the New York nonprofit group Guiding Eyes for the Blind, brought the animals through an airport security line as if they were going to board a flight.

But it was just practice to get the dogs used to all of the airport’s sights, sounds and pat-downs. Unlike humans, puppies love pat-downs.

“That way, both the individual and the animal know what to expect in the future,” said Tom Stein, a lead transportation security officer with the Transportation Security Administration. “It’s beneficial for them because it lowers their stress level. It’s beneficial for us because we want people to trust us. We want people to have a good experience at the screening checkpoint.”

“That way if they see something uncommon, something unusual, they’ll feel comfortable coming back and letting us know about it,” he said.

Their trainers also walked the puppies around other parts of the airport, including baggage claim and up and down stairs.

“We usually get them about 8-to-10 weeks old, we can have them 15-to-16 months, and they’re with us 24/7. We teach them basic obedience, and we lay the foundation for their future work,” Matczak said.

Eventually, the dogs will go back to New York for testing. If they pass, they will go into four-to-six months of training to become a guide dog.

Although still in training, Mugsy is a very good pup.

“I can drop food on the floor, he will not go after it. He does not get on my counters, he does not go on my furniture. He goes to the bathroom on command,” Matczak said.