CANBERRA, Australia (AP) — Australia’s opposition leader said he tested positive for COVID-19 on Thursday in the second week of a campaign ahead of the May 21 election.

Anthony Albanese, the 59-year-old leader of the center-left Labor Party, said he was feeling fine and would isolate at his Sydney home for a week.

“While at home, I will continue my responsibilities as alternative prime minister and will be fighting for a better future for all Australians,” Albanese said in a statement.

The diagnosis is a setback for his party, which is seeking its first election victory since 2010. Labor has been leading Prime Minister Scott Morrison’s conservative government in opinion polls in recent months.

Morrison, 53, tested positive for COVID-19 on March 1, and his symptoms were mild.

Morrison and Albanese came face to face Wednesday for the first time since the election was called on April 10 when they attended the first televised leaders’ debate in Brisbane. They shook hands and posed together for photographs.

“Everyone’s experience with COVID is different and as Labor’s campaign continues, I hope he does not experience any serious symptoms,” Morrison tweeted.

Despite his recent contact with Albanese, Morrison continued campaigning Friday in Queensland state, which will likely be pivotal to the election result. Labor lost two Queensland seats at the 2019 election and now only holds six out of 30 in the coal-rich state due in part to Labor’s more ambitious targets for reducing greenhouse gas emissions.

Hours before his positive test, Albanese wore a mask while talking to residents at Symons House retirement village in Nowra, a coastal town south of Sydney.

Albanese said he found he was infected after a routine PCR test Thursday afternoon ahead of a planned flight across the country to the west coast city of Perth.

Australia on Thursday reported 54,137 new coronavirus infections in the latest 24-hour period and 50 deaths in a population of 26 million. 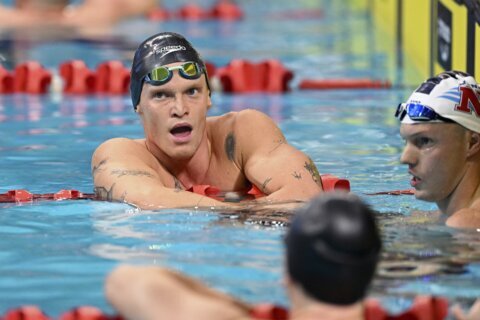