BEIJING (AP) — A seemingly innocuous government recommendation for Chinese people to store necessities for an emergency quickly sparked scattered instances of panic-buying and online speculation: Is China going to war with Taiwan?

The answer is probably not — most analysts think military hostilities are not imminent — but the posts on social media show the possibility is on people’s minds and drew out a flurry of war-mongering comments.

Taiwan is a self-governing island of 24 million people China regards as a renegade province that should come under its rule. Tensions have risen sharply recently, with China sending a growing number of warplanes on sorties near the island and the U.S. selling arms to Taiwan and deepening its ties with the government.

Most residents interviewed in Beijing, the Chinese capital, thought war was unlikely but acknowledged the rising tensions. They generally favored bringing Taiwan under Chinese rule by peaceful means, the official position of China’s long-ruling Communist Party.

“I don’t feel panic but I think we should be more alert about this than in the past,” said Hu Chunmei, who was taking a neighborhood walk.

War fears or not, there were scattered reports of runs on rice, noodles and cooking oil in some Chinese cities, according to local media. The more immediate worry for some was the possibility of neighborhood lockdowns as a COVID-19 outbreak spreads in several provinces.

The government moved quickly to try to tamp down fears with assurances of sufficient supplies. A bright yellow sign in an aisle of a Beijing supermarket asked customers to buy reasonably and not to listen to rumors or stockpile goods.

The online speculation started with a Commerce Ministry notice posted Monday evening about a plan to ensure the supply and stable price of vegetables and other necessities for the winter and spring. A line in it encouraged families to store some necessities for daily life and emergencies.

That was enough to set off some hoarding and a discussion on social media that the ministry could be signaling people should stock up for war.

China’s state media has covered the rising tensions with Taiwan heavily, including the often-tough words exchanged between China on one side and the U.S. and Taiwan on the other.

“It is natural to have aroused some imagination,” social commentator Shi Shusi said. “We should believe the government’s explanations, but the underlying anxiety deserves our thought.”

He said the populist views cheerleading for war don’t represent majority opinion but do send a signal or warning to Taiwan.

Other developments fueled the war speculation. One person shared a screenshot of a list of recommended emergency equipment for families issued in August by the government in Xiamen, a coastal city near an outlying Taiwanese island. An unverified report — denied Wednesday by a military-affiliated social media account — said veterans were being called back to service to prepare for combat.

It’s difficult to gauge how many people interpreted the notice as a possible prelude to war, but the reaction was strong enough to prompt a state media response the next day.

The Economic Daily, a government-owned newspaper, said people’s imagination shouldn’t run so wild, explaining that the advice was meant for people who may find themselves suddenly locked down because of a COVID-19 outbreak.

Hu Xijin, the editor-in-chief of the Global Times newspaper, blamed the the online speculation on the amplification of public opinion during a time of tension.

“I do not believe that the country wants to send a signal to the public at this time through a notice from the Commerce Ministry that people need to ‘hurry up and prepare for war,’” he wrote.

Zhang Xi, another Beijing resident, ruled out the possibility of war and counseled patience in a dispute extending to when Taiwan and China split during the civil war that brought Mao Zedong’s Communists to power in 1949.

“This is a leftover from history, and it’s impossible to solve this right away,” she said. 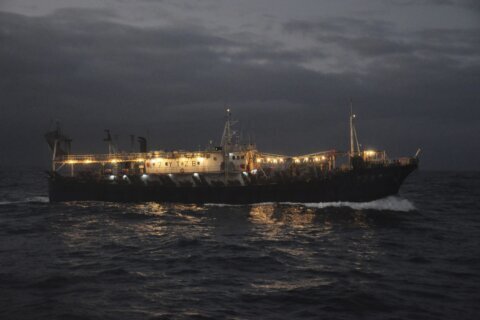