TOKYO (AP) — A member of Myanmar’s national soccer team who played a 2022 World Cup qualifier in Japan has refused to return home and is seeking asylum, a request the government was considering taking into account unrest in his country following a coup.

Pyae Lyan Aung, a substitute goalkeeper, was scheduled to fly home from Kansai International Airport late Wednesday but failed to join the rest of the team. He expressed wish to seek refuge in Japan, and, through an interpreter, said that by returning to Myanmar, he would “risk his life,” according to Kyodo News agency.

During the May 28 match against Japan, he raised a three-finger salute, a symbol of the anti-coup resistance movement in Myanmar, with a message “we need justice” written on his fingers. The footage was widely shared on social media.

Chief Cabinet Secretary Katsunobu Kato told a regular news conference Thursday that Japan will respond “appropriately” to his case, in line with Tokyo’s new policy that extends Myanmar nationals’ stay in Japan for up to a year if they fear persecution at home.

Kato declined to comment on the details of his case, saying the government “will hear his wishes and respond appropriately.”

“The situation in Myanmar remains uncertain and we understand many Myanmar residents in Japan have fear of returning home,” he said.

Japan’s immigration authorities on May 28 introduced new measures for Myanmar residents who fear for their safety if they return home.

Speaking to reporters, Pyae Lyan Aung said the military had visited his home in Myanmar.

He said he was concerned for the safety of other players and their families because of his refusal to return, and it made him undecided until the last minute. But he said he summoned all his courage to tell Japanese immigration authorities he wanted to stay, according to Kyodo.

The Feb. 1 coup that ousted the elected government of Aung San Suu Kyi reversed years of progress toward democracy in Myanmar after five decades of military rule. It was met with widespread public opposition that the military has tried to silence through force, including killing people protesting on the streets and imprisoning activists and journalists.

Japan has criticized the military government’s deadly crackdown, but has taken a milder approach than the U.S. and some other countries, which have imposed sanctions against members of the junta. 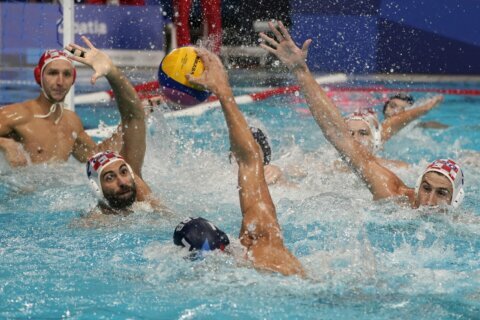