“Earlier this week, we began excavation of the park space,” said Jeff King, of Clark Construction.

King gave the update on Wednesday to invited guests, including Virginia Gov. Ralph Northam, while standing on a bare concrete floor with sheer netting for walls overlooking an empty space at the corner of 13th Street South and South Fern Street.

“When complete, the reimagined park will include more than two acres of new and restored public space that are designed for a variety of uses. You will have dog parks, recreation areas; there’ll be farmers markets, a children’s playground and even a forest walk,” King said.

The forest of 300 trees and more than 50,000 plants will be planted at seasonably appropriate times, advancing toward Metropolitan Park’s opening date in 2023.

Since breaking ground in January 2020, what started 50 feet below street level is now 15 floors above ground, progressing with a new floor being added about every eight to 10 days, which will eventually include two 22-story office buildings.

Nestled between the floors of one of the buildings is an area with skylights and soaring window spaces for a 700-person events center.

“Open to both Amazon and importantly to the community to use when they would like to,” said Patrick Phillippi, who leads external affairs for HQ2. He works with small businesses, nonprofits, and community groups in the region.

“We’re really excited to have contributed more than $30 million to community groups, small businesses and nonprofits in the region,” Phillippi said.

The first small businesses to sign leases at HQ2 are District Dogs and RĀKO Coffee, which is a day-to-night concept café intending to offer cocktails during evening hours.

The Café is owned by two sisters. Throughout the HQ2 site, priority is being given to women-owned, minority-owned and small, local businesses.

“Our focus is every single one of these retailers will be local, from this area,” said Joe Chapman, director of Amazon Global Real Estate & Facilities. “We want to help create an 18-hour district that people want to drive to, not just drive through, and the businesses we attract to this neighborhood will be a big piece of that.”

There also will be designated space at the site for a day care.

Also, there are a number of new openings to work with the online retail giant.

“As of today, we have more than 3,500 Amazon employees working at HQ2. and we have more than 2,500 open roles, which is double what we were a year ago today. HQ2 is on track and is here,” Brian Huseman, vice president of public policy for Amazon.

“Over the past two years, since the fund has been created in the HQ2 region, we have donated over $500 million in low-rate loans and grants to preserve over 2,300 affordable homes in the HQ2 region and more is going to come,” Huseman said. 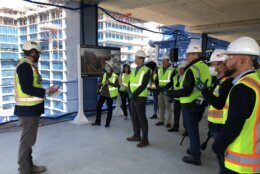 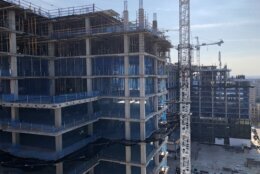 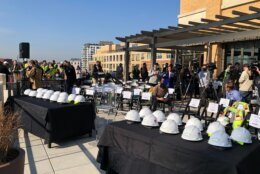 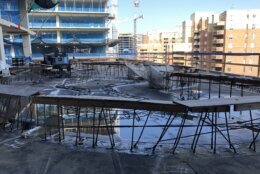 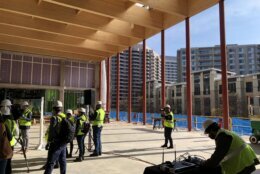