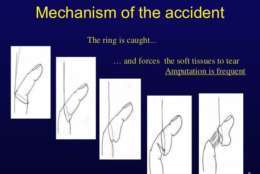 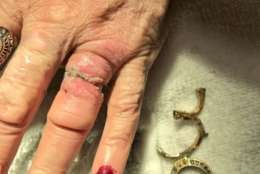 The department sent out a tweet in order to raise awareness about Ring Avulsion. The tweet included a photo of the woman’s finger after the ring was removed with her permission.

Ring Avulsion occurs when the ring gets caught and tears the skin and tissue around it.

Public Information Officer for the Arlington County Fire Department Ben O’Bryant said in an email that the woman went to the emergency room at Virginia Hospital Center after a ring she was wearing began irritating the skin on her finger, causing her finger to swell. When swelling occurs, tissue damage is possible to the skin under and around the ring, due to compression of the tissue.

The ER requested assistance from the fire department.

“Most ring removals are a basic skill that the ER and all our units are trained and equipped to handle with a simple ring cutting device or other simple removal technique,” O’Bryant said.

If the swelling is too severe, or if it is not a typical ring, the removal can become more tricky. But Arlington Fire is equipped to handle those situations.

“Basically, Rescue 104 used some shielding devices and a small grinding tool to cut the ring off without injuring the patient,” O’Bryant said.

It’s not to be tried at home, though, he warned. Similarly, officials say never to attempt to pull a ring off your finger forcefully, as amputation is frequent.

The woman was discharged from the ER shortly after the ring was removed.