A motorcyclist who had participated in the Rolling Thunder Run had a fatal crash on I-66 approaching the Rosslyn Tunnel. He died in the hospital Sunday evening.
Listen now to WTOP News WTOP.com | Alexa | Google Home | WTOP App | 103.5 FM

WASHINGTON — A motorcyclist who had participated in Rolling Thunder died from injuries sustained in a crash Sunday evening.

The Virginia State police on Monday morning identified the motorcyclist as Craig A. Vanbrunt, 66, of Pendleton, Indiana.

He had lost control of his bike and was unable to brake in time in the westbound lanes of Interstate 66 in Arlington County, the Virginia State Police say.

He was riding with a group of other motorcyclists who had also participated in Rolling Thunder on Sunday afternoon. They were on their way out from the event when they came upon stopped traffic near the Rosslyn Tunnel.

Vanbrunt couldn’t brake in time, fell from his bike before it crashed and was taken to George Washington University Hospital, where he later died from his injuries. The police say he was wearing a helmet. 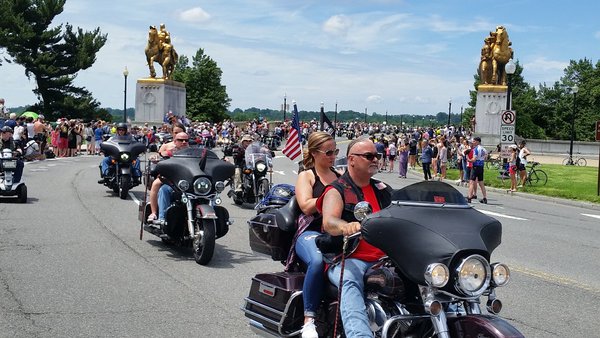