The incident happened at around 8 p.m., as emergency personnel on an unrelated call were working to remove a sick passenger from a flight that had just arrived at Gate E-10.

Six people were hurt when the jet bridge failed. They were treated for non-life threatening injuries and were released from the hospital on Sunday morning.

The jet bridge was taken out of service.

Crews had inspected all 33 of the jet bridges that had brackets made by the same manufacturer and found they were safe to use, state officials said. But as a precaution, five other jet bridges would be taken out of service Sunday night in order to replace similar brackets that were installed at around the same time as the defective one.

The jet bridges — the walkways between the terminal and the plane — would be put back in services as the fixes are completed. 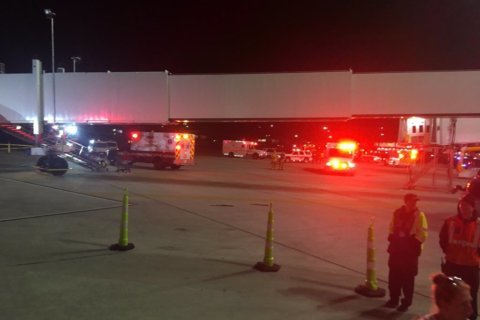