Traffic was stopped on the George Washington Parkway near Reagan National Airport on Tuesday afternoon so a medevac helicopter could land, but the patient wasn't human — it was a very special dog.
Listen now to WTOP News WTOP.com | Alexa | Google Home | WTOP App | 103.5 FM

Traffic stopped on the George Washington Parkway near Reagan National Airport Tuesday afternoon so a medevac helicopter could land, but the patient wasn’t human — it was a very special dog.

The 6-year-old German shepherd named Kylie works for D.C. Fire and EMS as a cadaver dog, but she and her handler Sgt. Paramedic Gene Ryan travel to other places to share their expertise.

D.C. Fire and EMS spokesperson Vito Maggiolo said that on Tuesday in Northern Virginia, the dog seriously hurt one of her hind legs while helping another law enforcement agency conduct a search.

Maggiolo did not disclose the name of the agency or the reason for the search, but he said U.S. Park Police and the Arlington Fire Department sprang into action help the dog.

“They were able to quickly get Kylie out of what was a thickly wooded area and put the injured animal onto a helicopter,” Maggiolo said.

She was rushed to Friendship Hospital for Animals in Northwest where she underwent surgery, and her prognosis is good.

Today #DCsBravest Special Ops K-9 Kylie & partner Sgt. Gene Ryan were assisting with a search when Kylie suffered a severe injury in a wooded area. She was flown by @usparkpolicepio helicopter to an animal hospital, is undergoing surgery, and prognosis is very good. pic.twitter.com/hlpYJQPmt6

“We treated her like we would treat any one of our members who suffered a severe injury,” Maggiolo said. “She is considered one of the D.C. Fire and EMS family.”

Last month, Ryan and Kylie were among the recipients of the 18th annual Morris & Gwendolyn Cafritz Awards for excellence in public service.

The George Washington University Center for Excellence in Public Leadership partners with the foundation to hand out the awards, and a video the center posted on YouTube details some of the important work Kylie and Ryan did last year on high-profile cases you may remember.

After the Arthur Capper Senior Apartments near the Navy Yard burned and collapsed, Kylie found the cremated remains of a resident’s husband buried in 30 feet of rubble.

Following the discovery of human bones under a house in Southeast D.C., the dog found two more sets of human remains nearby.

It turns out, the trip in the chopper was not the first time Kylie was rescued.

Ryan said in the video that when he founded the department’s Human Remains Canine Team:

I started screening dogs around the country. I called shelters and kennels and I said, ‘Do you have a dog that’s totally crazy, a dog that rips apart couches, that’s totally off the wall? Give me a call because those are dogs that are just looking for a job. And I started giving these tests. It’s a FEMA test, it’s a standard assessment, and I came across Kylie. Kylie was this skinny little emaciated dog who was about to be euthanized. I gave her the test, and she was a rock star.

Watch the video below. 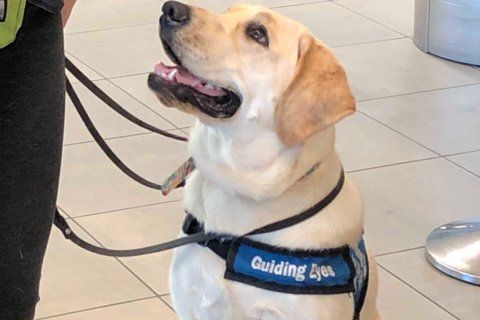 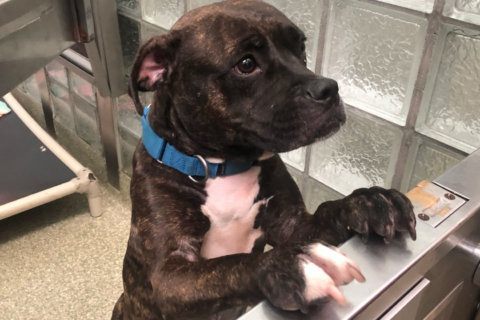 Can’t rescue a dog? Shelter allows you to host a pet during ‘Happy Hour’