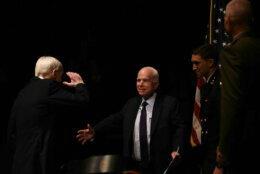 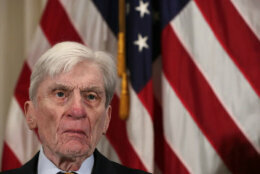 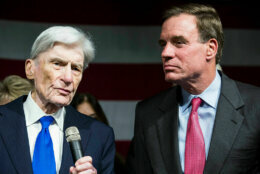 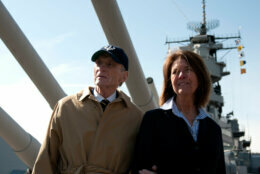 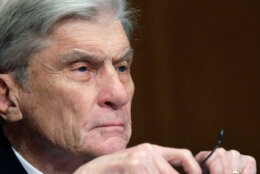 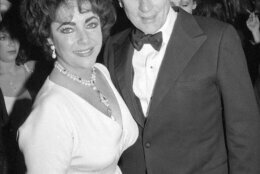 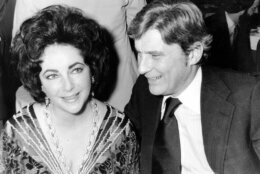 Warner died at his home in Alexandria, Virginia, Tuesday evening, according to Warner’s former Chief of Staff Susan Magill.

“He was frail but had a lot of spirit until his last days,” Magill said.

His wife, Jeanne, and daughter, Virginia, were by his side when he died of heart failure.

Warner, a World War II Navy veteran who made foreign policy and military matters his top concern across nearly four decades of public service, is remembered as a centrist Republican who earned the respect of members of both parties.

“As a sailor, a senator, a statesman, and a gentleman, former U.S. Sen. John Warner spent his life in public service,” Northam said.

“John helped build up his political party and always remained an independent voice,” Northam said. “He used that voice in the Senate to forge bipartisan compromise, knowing how and when to reach across the aisle. And he always put Virginia first.”

No funeral arrangements have been announced, but Northam said he has ordered flags to be flown at half-staff over the Virginia Capitol on the day of Warner’s funeral.

Warner served in the Senate from 1979 until January 2009, when he retired. Read Warner’s letter to Virginians when he announced his retirement plans.

In his letter announcing his retirement from the Senate, Warner expressed gratitude to his constituents, the University of Virginia and the military.

“One’s achievements in life are largely owed to all who helped along the way. That’s why I shared with you my lifetime of gratitude for what I learned in Virginia’s educational institutions and from our U.S. military. They forged my character; they forged my sense of values,” Warner wrote.

“Public service is a privilege. As I look back over my long career, may generous opportunities have been given to me. As I now add up all the years of public service it totals 45 years!”

More recently, Warner, a lawyer, had retired from the law firm of Hogan Lovells in June 2020. He served as a senior adviser and former partner in the firm’s government relations practice.

Warner also was the sixth of movie star Elizabeth Taylor’s seven husbands. The two were married from 1976 to 1982.

Warner’s experience in the military would prove valuable in the Senate, where he served as chairman of the Armed Services Committee.

Warner was known for having an independent streak that sometimes angered more conservative GOP leaders, but he was well-respected on both sides of the aisle.

Steamed by what they viewed as disloyalty to the party, GOP conservatives tried to deny him a fourth term in 1996, backing a challenge by former Reagan administration budget director Jim Miller.

“Although he was a strong Republican, and on most issues came down on the Republican side, there were some notable issues where he parted company because he didn’t feel it was in the best interests of the state,” said former Virginia Republican Congressman Tom Davis, who served as the campaign chairman for Warner’s 1996 renomination bid.

“He represented I think what the Founders wanted, and that was a senator who represented states, not parties and he was just a great spokesman for Virginia,” Davis said.

Davis recalled Warner’s efforts to secure funding for Metro’s Silver Line to Dulles and of how he haggled tirelessly to secure millions to rehabilitate the Woodrow Wilson Bridge. When his efforts proved successful, and it came time for a ribbon-cutting ceremony, other officials took the spotlight. “He just said, ‘Don’t worry about it’ … He didn’t care about who got the credit. That was John Warner.”

In recent years, Warner broke ranks further with his party, endorsing Democrats Hillary Clinton and Joe Biden over President Donald Trump in 2016 and 2020.

Senators from Virginia who followed Warner said they will miss his friendship and counsel.

“Once I came to the Senate, I understood even more deeply the influence of John Warner. I came to know John McCain, Carl Levin, and so many others who served with him and attested to his integrity and outsized influence in a body he loved so dearly. In particular, John’s service in the Navy during World War II, as a Marine during the Korean War, and as Secretary of the Navy, made him a steady hand as Chair and Ranking Member of the Senate Armed Services Committee,” Kaine said.

Democrat Mark Warner, who had challenged Warner for the Senate in 1996 and went on to serve a term as Virginia’s governor, won the election to succeed him in 2008. After years of rivalry, the two became good friends, and John Warner attended his swearing-in in January 2009. Mark Warner, who is not related to John Warner, said his friend “epitomizes what it means to be a senator.'”

I’m devastated to hear of the passing of my dear friend John Warner. To me, he was the gold standard in Virginia. I will forever be grateful for his friendship and mentorship. I’ll miss you, John. pic.twitter.com/5CFaEIEuSm

Mark Warner said, “John’s service to our country never ended; he remained an active participant in public affairs. He was always available with a keen ear, sound judgment, good humor and a few words of encouragement and advice. The last time I saw him just a few weeks ago, he was full of questions about the latest in the Senate and in Virginia.

The Virginia Senate Democratic Caucus issued a statement saying, “Political party didn’t matter to Sen. Warner; he valued forward-thinking ideas, hard work, and good governance. Sen. Warner will be missed, and remembered as the titan he was in Virginia.”

Additionally, the Virginia Senate Republican Caucus released a statement from Senate Republican Leader Thomas Norment (James City) that said: “It is extraordinary for one person to be so prominent for so long in Virginia politics. Senator Warner endured because the people of Virginia knew he put their interests first.”

WTOP’s Matt Small and Jack Moore and The Associated Press contributed to this report.

1 dead, shot inside car in Alexandria