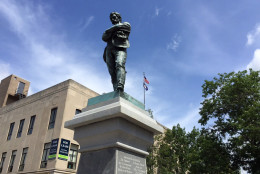 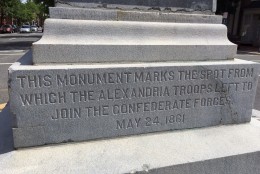 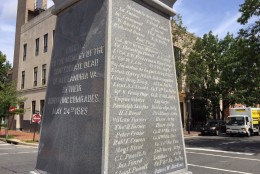 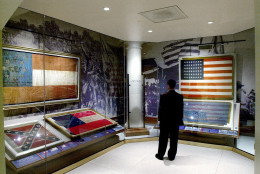 ALEXANDRIA, Va. – The effort to define the difference between honoring Confederate history and glorifying racism will take place in coming months in a town especially rich in Civil War history: Alexandria.

When city leaders come back from summer break in September they plan a review of policies regarding flying the Confederate flag that also will include a discussion of Confederate statues and street names.

Twice a year the Confederate “Stars and Bars” flags, which differ from the controversial battle flag, are hung at the “Appomattox” monument that depicts a Confederate soldier and remembers the 100 Alexandrians who died fighting for the Confederacy in the Civil War.

The flags are hung at the prominently positioned statue at South Washington and Prince streets on Confederate Memorial Day and the birthday of Robert E. Lee.

“I think there is a desire to depart from that tradition. I think that’s a pretty easy one,” says Alexandria City Councilman Justin Wilson.

Wilson believes a challenging issue that’s more practical than emotional would be to change names on the great number of city streets named after figures from the Confederacy.

“We have to be careful from a disruptive perspective that we’re not turning the city upside-down,” Wilson says.

Alexandria Mayor Bill Euille expects changes, if any, will come after vigorous debate.

“We’ll take appropriate action with community impute and conversation. We want everyone to have an opportunity to weigh in on this,” Euille says referring to the flying of the Confederate flag.

There also are calls to remove the “Appomattox” memorial statue from Prince Street.

“I would imagine that when we have this conversation in September there’s going to be a lot of broad-based support to do something about the statue in its current site,” Euille says.

Euille believes the statue might be more appropriately placed in a park or historic building.

The statue is owned and maintained by the United Daughters of the Confederacy on a city right of way.

Members of Alexandria’s delegation to the General Assembly also are considering whether to file bills to rename Jefferson Davis Highway that would need support from leaders in Arlington. Much of U.S. 1 in Virginia is named after the president of the Confederate States of America.

Calls to remove the Confederate flag from retailers and public buildings have been widespread since nine black people were killed inside a Charleston, South Carolina, church by a white man, who had posed for pictures with the battle flag, a symbol of hatred and racial subjugation for some. Others have argued that the flag is merely a symbol of Southern heritage and history and shouldn’t be blamed for the church shooting.

The flag will stop flying at the South Carolina Capitol this week and the U.S. House has considered whether to allow the flag at some national cemeteries in the South.