Oprah Winfrey will be interviewing Prince Harry and Meghan, Duchess of Sussex, on in their first interview since they stopped royal duties and since announcing she is pregnant with their second child. In a preview of CBS’ “Oprah with Meghan And Harry: A Primetime Special,” Meghan accused Britain’s royal family of actively encouraging lies about her.

Asked by Oprah how she feels about the palace hearing her speaking out about life in the royal bubble, Meghan replied, “I don’t know how they could expect that, after all of this time, we would still just be silent if there is an active role that ‘The Firm’ is playing in perpetuating falsehoods about us.” “The Firm” is a common nickname for the royal family.

How to watch Oprah’s interview with Prince Harry and Meghan 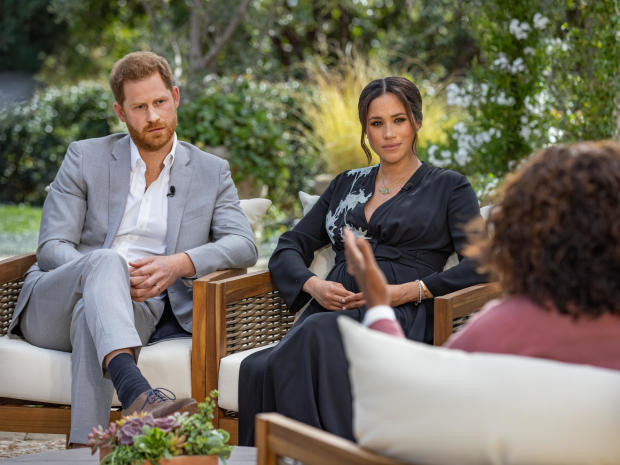 Prince Harry and Meghan, the Duke and Duchess of Sussex, seen with Oprah Winfrey in an upcoming interview on CBS.

CBS News has confirmed allegations first reported on Wednesday by The Times of London that after Meghan married Harry in 2018 and moved into the royal household, unnamed staff members accused her of “emotional cruelty and manipulation,” forcing two aides to quit.

In a rare move, Buckingham Palace issued a public response, saying on Wednesday that it was “clearly very concerned about allegations in The Times,” and that its human resources team “will look into the circumstances outlined in the article.”

“You could probably only describe that relationship now, between the two sides, as all-out war,” Sunday Times royal correspondent Roya Nikkhah told CBS News. The couple’s interview with Oprah was recorded two weeks ago, before the accusations became public.

In another preview of the interview, Harry said his “biggest concern was history repeating itself,” an apparent reference to his late mother, Diana, Princess of Wales. His parents divorced in 1996 after a long — and very public — breakup. She died a year later in a car crash after being chased by the paparazzi. Harry was 12 years old when she died.

“You know, for me, I’m just really relieved and happy to be sitting here, talking to you, with my wife by my side,” Harry said. “Because I can’t begin to imagine what it must have been life for her, going through this process by herself, all those years ago. Because it has been unbelievably tough for the two of us — but at least we had each other.”

Harry told James Corden in February that he feels the British press is “toxic.”

“We all know what the British press can be like, and it was destroying my mental health… I was like, ‘This is toxic,'” the prince told Corden in an interview that aired on CBS’ “The Late Late Show.” “So I did what any husband and what any father would do — was like, ‘I need to get my family out of here.'”

Harry and Meghan’s interview comes as his grandfather, 99-year-old Prince Philip, has been hospitalized for more than two weeks. On Thursday, Buckingham Palace said he had successfully undergone surgery for a preexisting heart condition.