Though they’re not immediately noticeable, the 200-year-old White House would simply not function without them.

Kate Andersen Brower, author of “The Residence: Inside the Private World of the White House,” told WTOP there is a universe of people at the White House that the public never sees.

“There are about 90 to 95 residence staffers, and these are the butlers, the housekeepers, the cooks, the florists, engineers, and the list goes on and on,” Brower said.

These federal employees, according to Brower, “are incredibly dedicated to their jobs, and they have such great respect for the presidency that they stay on from one administration to the next.”

They are, Brower said, “a group of nonpartisan people who are dedicated to democracy in a way that you don’t see very much anymore.”

But this distinguished group of residence staffers is also at extraordinary risk during this COVID-19 outbreak at the White House. A significant number of these staffers, who are long-term employees, are at high risk of contracting COVID-19 because of several factors, including age, space restrictions and disabilities.

“Many of the butlers are African American, and they are also over 50 because they serve there for so many years. They’re older, so that does put them at increased risk and makes them more vulnerable,” Brower said.

Dr. Anthony Fauci, director of the National Institute of Allergy and Infectious diseases, told the WTOP podcast COLORS recently that because of comorbidities such as diabetes, heart disease and kidney disease, COVID-19 is taking a higher toll on African Americans than other racial groups. That’s supported by other research.

“There are two elements [questions] that need to be clarified. One, the likelihood that African Americans will get infected versus whites or others. And, when and if they do get infected, the likelihood of their getting a serious outcome more so than whites. The answer is, unfortunately, yes, to both,” Fauci said.

But there is an even more vulnerable population within this already susceptible group of White House residence staffers. Bill Yosses, a former pastry chef at the White House, said among them “are people with developmental or other disabilities.”

This group of employees are a part of U.S. government efforts to make federal workplace hiring more equitable to eliminate discrimination.

But COVID-19 doesn’t discriminate either. Everyone is susceptible to a deadly illness that can be passed on by a cough, sneeze or simply breathing.

Though the second floor of the White House, where the residence is located, is not as big as one might imagine, “the West Wing, particularly, is very cramped quarters. There are desks within feet of other desks. For the two years that I worked there, I had two other desks within 4 feet of my desk,” Beliveau said.

Because of the desire to be proximal to the president, he said, “there are offices in the West Wing so small that they would be considered closets in any other office building. And we really pack people into that space.”

Many of those that work in the West Wing have been given the flexibility to work from home. But for the residence staffers, there is no such thing.

And what’s worse, according to Yosses, is that when they do leave the White House and go home, they put their own families at risk. “That’s the crux of the matter,” he said. 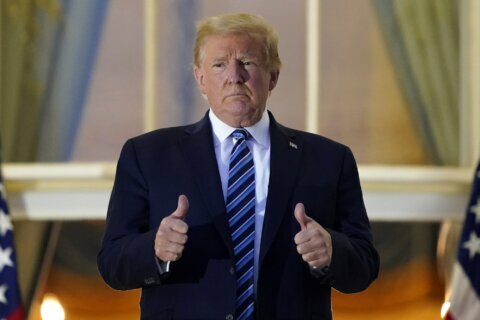