Icy and rainy weather is set to arrive in the D.C. area Monday, before a winter storm makes its way to the region later in the week.
Listen now to WTOP News WTOP.com | Alexa | Google Home | WTOP App | 103.5 FM

Icy and rainy weather is set to arrive in the D.C. area Monday, before a winter storm makes its way to the region later in the week.

Storm Team4 Meteorologist Somara Theodore said the first round of rain and wintry mix will start to push into the area from the southwest by lunchtime Monday.

The icy conditions will be worst in the Shenandoah Valley, which is under a Winter Storm Watch from 1 p.m. Monday until 10 a.m. Tuesday.

Mainly dry and chilly today with a chance for flurries late this afternoon. A Winter Storm Watch is in effect starting at 1 pm Monday and going through 10am on Tuesday for the threat of a wintry mix producing a quarter inch or more of ice. pic.twitter.com/1rYxDkNKTi

Theodore said temperatures will top out in the upper 30s on Monday, with the wintry mix turning to mostly rain and covering more of the D.C. area later in the afternoon. D.C. and the surrounding counties will have a chance for freezing rain Monday night into Tuesday morning.

Icy roads will be a concern Tuesday morning along the I-81 corridor and in the Northwest Suburbs of D.C., Theodore said. Conditions will dry out by Tuesday afternoon and the region will brace for a potential winter storm that could start Wednesday night into Thursday morning.

Theodore said it’s possible that high pressure to the north will work as a blocking agent and suppress the incoming storm to the south, but if the storm does become well defined and slip farther north, the D.C. area could see a decent amount of snow.

Right now, Theodore said the forecast is leaning toward lower snow totals, but she said that’s subject to change. 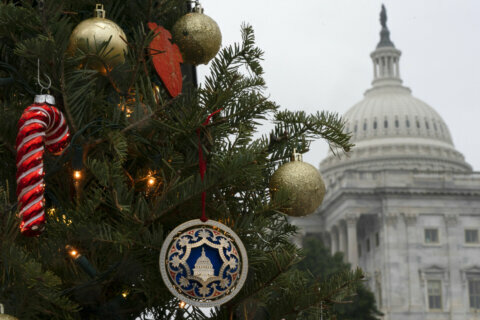