Severe thunderstorms in the early evening made way for flood and tornado warnings as the system moved out of are area.
Listen now to WTOP News WTOP.com | Alexa | Google Home | WTOP App | 103.5 FM

A Flood Watch for the majority of the D.C. region is in effect until 4:00 a.m. Thursday.

The quick moving storms rapidly dumped between 1-3 inches of water in some areas — with another 1-2 inches of rain expected throughout the night. High wind gusts cause debris to fly and tree branches to fall in some areas, leading to handful of power outages, traffic incidents and blocked roadways.

The severe weather led to flooding and road closures in Howard County, Maryland, particularly in historic Ellicott City where Main Street and other surrounding roads were shut down for about an hour.

Tornado Warning. Now flood warning in Ellicott City.
Tributary out back of our apt is rising and moving fast. pic.twitter.com/cKwWgbk6NX

A spokesperson for the Howard County Fire Department told WTOP a tornado may have touched down in the area of Cradlerock Way and Overheart Lane in Columbia. NWS is investigating the area because of tree damage.

Nearby in Columbia, fans of pop star Halsey, who had been hoping for a post-rain miracle, were sorely disappointed when Merriweather Post Pavilion scrapped the concert at 10:02 p.m. due to “weather-related technical difficulties. Some fans recorded parts of the venue, including its lower bowl, suffering from flooding caused by the rain.

The venue said fans will receive more information about refunds or a rescheduled show date from their ticket vender. In a statement on Twitter, Hasley said it would have been “unsafe if I went out there and people rushed the stage during or after the storm.”

In a second message, she said she was disappointed with how Merriweather Post Pavilion officials handled the weather issues, adding that a rescheduled date “will be happening somewhere else.”

I really want to add that I am beyond disappointed with the way the venue handled everything tonight and my rescheduled date will be happening somewhere else. I hear you guys loud and clear I promise.

Drivers should be alert for roadway flooding and slippery conditions while traveling: A flood watch is in effect for the entire WTOP listening area, including D.C. and Baltimore, until 4 a.m. Friday. Runoff in stronger storms could lead to flooding along rivers, streams, roadways and other low-lying or flood-prone locations.

“Thunderstorms will continue tonight, and these storms may produce gusty winds and heavy rainfall,” Storm Team4 Meteorologist Mike Stinneford said. “Storms will taper off after midnight, and the weather will start to improve on Thursday as a cold front sags off to the south.”

Wednesday night: Showers and storms ending after midnight; remaining mostly cloudy and humid. Lows in the mid 60s to near 70.

Thursday: An early shower, then becoming mostly sunny, breezy and less humid. Highs in the low to mid 80s.

Friday: Sunny in the morning. Becoming cloudy in the afternoon. Pleasant. Highs near 80.

Saturday: Showers and a few thunderstorms. Highs in the low to mid 70s.

Sunday: Partly sunny. Chance of a shower or afternoon thunderstorm. Highs in the low 80s. 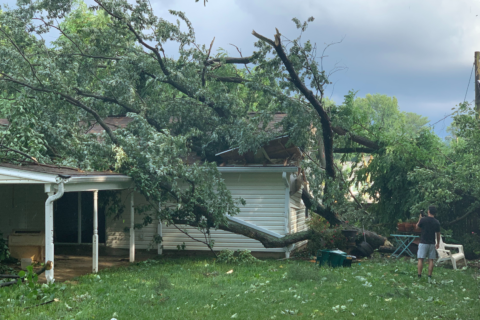