"Today and tomorrow will be a good opportunity to insure that all gutters and storm drains are clear of debris. Wednesday will be the worst of it in the D.C. Metro," Storm Team4 meteorologist Chuck Bell said.
Listen now to WTOP News WTOP.com | Alexa | Google Home | WTOP App | 103.5 FM

It’s all about Ida this week: The remnants of the former major hurricane will drift across the D.C. region from Tuesday through Thursday after its devastating landfall in Louisiana, bringing with it gusty winds and a risk of widespread flooding.

On Monday, parts of Virginia and Maryland saw some rainfall, prompting severe thunderstorm warnings and flash flood watch that expired early. The scattered storms brought brief, heavy downpours in the afternoon and into the evening.

As what’s left of Ida works itself through the D.C. region, a flash flood watch will be in effect from Wednesday morning through Thursday morning.

This watch is from Ida’s remains, which will be moving up the Appalachian Mountains into parts of the mid-Atlantic and Northeast.

A weakening Ida is poised to dump between 3 and 5 inches on a capital region already waterlogged from recent thunderstorms; even greater totals are possible north and west of D.C. and Baltimore.

Scattered showers on Tuesday afternoon will become steadier and heavier after midnight as Ida interacts with a stalled frontal boundary on its projected path up the Tennessee Valley. Expect a continuous, soaking rainfall event from that point through the Wednesday evening commute.

“Plan to work from home if possible and, if you had travel plans, consider changing them to avoid being out in the worst of the storm,” Storm Team4 meteorologist Chuck Bell said, adding that Tuesday will be a good opportunity to ensure that all gutters and storm drains are clear of debris.

The National Hurricane Center’s latest forecast calls for Ida to swing east over the D.C. region as a post-tropical system — but like most decaying former hurricanes, torrential rains will be felt far and wide no matter what path it takes.

Forecasters call for between 3 and 5 inches of rain for much of the region. Residents of Virginia’s Blue Ridge and near the Maryland-Pennsylvania state line could see over half a foot of rain by the time Ida moves off on Thursday morning.

“This amount of heavy rainfall will not only result in the potential for considerable flash flooding of creeks and small streams, but also the potential for river flooding on the main stem rivers,” the weather service said in its forecast discussion.

While Ida’s remains are shaping up to be mainly a rain threat, sustained winds of around 25 mph with gusts of up to 40 mph — and scattered power outages — are possible as its core traverses our region.

“As the wind field unravels, the storm will unload catastrophic amounts of rainfall,” Bell explained. “Our entire area should prepare for the worst of the rain, wind and risk of power loss to arrive Tuesday night.”

Ida made landfall as a powerful Category 4 hurricane on the coastal marshes of Louisiana. Howling winds and blinding rain flooded communities and plunged the entire city of New Orleans into the dark. The storm is being blamed for at least one death as of Monday morning, though high water and damaged infrastructure made a full damage assessment difficult.

Tuesday: Partly to mostly cloudy. Slightly cooler with a few afternoon storms possible. Highs in the low to mid 80s.

Wednesday: Heavy rain and storms with a risk of flooding. Highs in the mid to upper 70s. 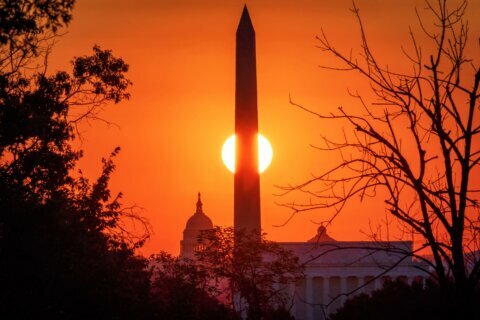 First day of fall: Why the equinox isn’t as equal as you might think

New
COVID-19 vax status on resumes? Some hiring managers say they toss resumes that don’t have it