When you think of places you don’t want to be in a tornado warning, how high does being on an airplane on the tarmac at Reagan National rank?
Listen now to WTOP News WTOP.com | Alexa | Google Home | WTOP App | 103.5 FM

When you think of places you don’t want to be in a tornado warning, how high does being on an airplane on the tarmac at Reagan National Airport rank?

That’s where D.C. resident Lindsay Hoskins found herself Thursday night. She was on American Airlines Flight 4042, bound for Columbus, Ohio, to see her family for the Fourth of July holiday weekend.

As she looked out the window, she didn’t like what she saw. 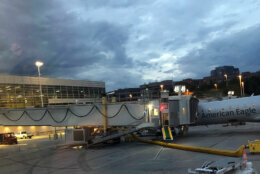 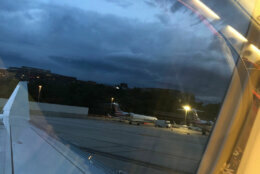 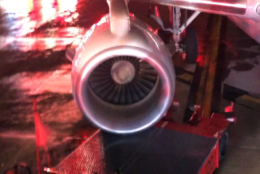 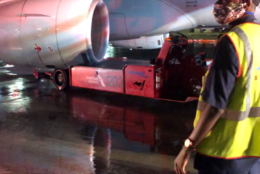 “You just see this big dark, dark black cloud,” Hoskins said. “In my head I’m like, ‘This is typical tornado weather.'”

It’s something she knows a bit about, growing up in tornado country.

She was anxious as the pilot announced they were getting ready to take off. Then the tug started pulling them away from the gate.

“And about a minute into being pulled out onto the tarmac, everyone’s phone alarm went off, with the emergency alert system really, really loud and ‘tornado warning take shelter now’ and everyone kind of just freaked out. It was very apocalyptic.”

Then she saw things happening on the ground.

“The sky went pitch-black and you just see all of the workers who are down on the ground start running into the building,” Hoskins said. “It was a very helpless, helpless feeling to know that everyone else is running and taking cover and we’re just stuck on this plane.”

Then the plane started shaking.

“That first minute or two when the storm hit was pretty intense, pretty scary,” she said. “The wind was spinning and it was just like chaos.”

As she looked outside, she saw more chaos on the ground.

“You could see all of the baggage carts and all the equipment they have down on the ground, it was moving and running into things on the ground,” she said.

Then she watched as the tug that had been pulling them was pushed by the winds into their plane, just beneath her window.

For Hoskins, who already had a fear of flying, the experience was one of her biggest fears come true.

“I was in a sheer panic attack, full-blown. I was sweating and shaking and crying,” she said. “The poor guy next to me. I had to grab his hand. I didn’t know what to do.”

She said other people in the plane were running from side to side, looking out windows to try and see what was happening.

Eventually, the winds died down, emergency crews arrived and once they inspected the plane they were able to evacuate everyone.

Hours later they were finally able to fly to their destination, without stormy weather.

As for Hoskins, when she has to come back home to D.C. next week, she may skip the airport.

“Yeah, I think I’m going to be driving,” she said. “I’ve had enough airplane experience for this week.”