After Tropical Storm Eta moves through Cuba Sunday, it is expected to head straight for Florida — and not just one part of Florida, but almost the entire state may feel the effects of Eta over the next several days.

Eta is the 28th named storm of the 2020 hurricane season, tying the record for the number of named storms in a single season set back in 2005.

Interestingly, despite how active the hurricane season has been, Eta would be the first named storm to make landfall this year in Florida.

If Eta does hit Florida, it would also be the 12th named storm to make landfall in the continental US this season, the most in one year. Previous storms this year were Bertha, Cristobal, Fay, Hanna, Isaias, Laura, Marco, Sally, Beta, Delta, and Zeta.

Where a tropical system goes depends on the atmospheric steering factors. In the case of Eta, there are several. In the short-term, the storm will continue to move northeast as Eta moves “in the flow on the east side of a mid- to upper-level trough over the Gulf of Mexico,” according to the National Hurricane Center.

After it crosses Cuba, a high-pressure system near Bermuda will partially steer the storm west into the Gulf of Mexico. In doing so, Eta could make landfall in Florida anywhere from Miami down to Key West.

Once Eta gets far enough west of that high-pressure system, it will start to shift northward. This movement is normal for tropical systems in the Northern Hemisphere as storms often head away from the equator and to the north. After that, the forecast models really begin to separate in terms of track agreement. Most of this is due to a cold front moving through the southeastern US.

“Cold fronts dropping down from the north can add another layer of complexity with forecasting November landfalls,” said CNN meteorologist Tyler Mauldin.

This specific cold front may end up steering Eta once again back towards Florida, with perhaps another landfall — this time on the western coast anywhere from Sarasota up to Panama City on the Panhandle.

Regardless of whether it actually makes landfall or not, it will bring very heavy rainfall, rip currents, and storm surge to south Florida over the next 48 hours.

From Naples to Miami down through the Keys, widespread rainfall totals will likely range from 4 to 8 inches, with isolated higher amounts.

Severe storms with tornadoes and waterspouts are also possible across South Florida on Sunday.

Several hurricane hunter flights are planned for Sunday. Data captured by these flights will help forecasters better understand the atmosphere within and around the storm, making it easier to narrow down exactly where this storm will go.

Eta isn’t the only unusual track

“There have even been November systems with multiple landfalls. Take Gordon of 1994. It’s well remembered for its erratic track, making three different landfalls as it moved up the state.”

Fay’s first landfall was at Key West on August 18, then less than 24 hours later it made a second landfall just south of Naples.

It crossed the state, exiting into the warm Atlantic Ocean waters near Melbourne, only to be deflected westward back toward Florida again. This resulted in a third landfall at Flagler Beach. The storm crossed the state yet again and emerged into the Gulf of Mexico. Two days later, it made its fourth and final landfall just east of Apalachicola in the Florida Panhandle.

Oh, and if you think 28 named storms aren’t enough … there’s another tropical disturbance in the Atlantic. Right now, it only has a 20% of developing into a named storm in the next five days, but that next name on the list is the Greek letter Theta. If named, it would break the record for most named storms in a single season. 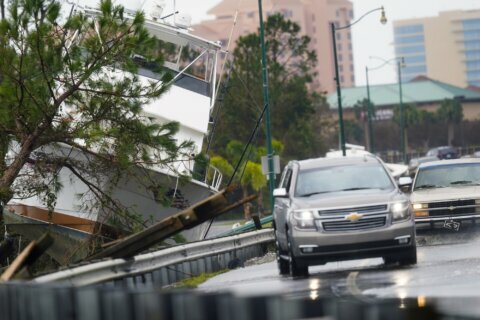