Coronavirus News: Fairfax Co. votes to increase substitute teacher pay | Is it time to get a COVID-19 booster? Which one? | Local cases of COVID-19 | How many in DC region are vaccinated?
Home » Weather News » More rain expected Friday…

After an evening of storms in the D.C. region, Friday will feature a murky start, but the weekend won't all be a wash. Here's what you need to know.
Listen now to WTOP News WTOP.com | Alexa | Google Home | WTOP App | 103.5 FM

A flash flood watch is in effect from noon until late Friday night for the WTOP listening area.

“We’ve had so much rain this week that any locally heavy rain could cause some flash flooding issues, so be extra careful if you’re driving after the sun goes down tonight for any high or fast moving water,” NBC Washington meteorologist Chuck Bell said.

There is a 70% chance for rain storms on Friday night. The growing amount of storms in the area caused the National Weather Service to issue a flash flood warning for northeastern Anne Arundel County. It was cancelled and changed to an areal flood warning until 3:30 a.m. Saturday.

Bell said the rest of the weekend should be nice other than a possible pop-up shower Saturday, though it will be hot and humid.

Sunday and Monday are expected to be dry.

Thursday night rain storms prompted a string of flash flood warnings and a flash flood emergency for parts of Loudoun County. Those warnings ended early Friday, but not before causing problems.

The area near and north of Leesburg, Virginia, was hit hardest.

WTOP’s Kyle Cooper said roads in Purcellville were severely flooded as a result of the storms. 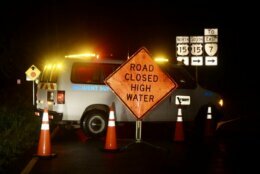 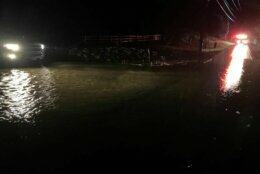 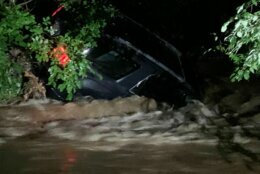 Heavy rains continue in parts of #Loudoun. Here are a few photos from Greenwood Dr & Rt. 719 in Round Hill where the roadway has become flooded. Please remember, if you come across a roadway that is flooded, never attempt to drive or walk through the water. #TurnAroundDontDrown pic.twitter.com/TNUpsElAV8