Risk of refreeze overnight, as DC area finishes 1st snow of the year

The D.C. area is getting over the first snowfall of the year, but the ordeal is not over yet. There is a risk of a refreeze overnight, and several schools in the area have announced closings and delays for Wednesday. Here's what you need to know.
Listen now to WTOP News WTOP.com | Alexa | Google Home | WTOP App | 103.5 FM

The D.C. area is getting over the first snowfall of the year, but the ordeal is not over yet. Dropping temperatures led to icy road conditions with crashes being reported overnight, and several schools have announced closings and delays for Wednesday. Here’s what you need to know.

“Everything that looks wet, assume it’s ice,” Ellen Kamilakis, of the Virginia Department of Transportation, told WTOP at about 7 p.m.

Untreated and secondary road are specially prone to freezing, as our bridges, ramps and overpasses.

School systems in Maryland and Virginia have announced closures and delays for Wednesday. See WTOP’s full list of closures and early dismissals for more details.

Kamilakis said that VDOT crews and some 700 trucks will be working overnight and into the morning to treat roads, and she asked drivers to give them room to do their jobs.

Wednesday morning traffic on Beach Drive from Grove 10 and Joyce Road NW in D.C. may be affected, as U.S. Park Police closed the road due to a large fallen tree that will be removed Wednesday.

D.C. roads experienced an early afternoon rush on Tuesday, as a lot of people were let out of work and school early. Some crashes were reported on D.C. 295, the Capital Beltway and in Route 50, among others.

Overnight freeze was the biggest worry for Charlie Gischlar, of the Maryland State Highway Administration. He told WTOP at about 4 p.m. that while the sun was coming out in far western Maryland, bridges, ramps and overpasses in the D.C. area could freeze up as the temperatures dropped.

Crews didn’t pre-treat the roads, Gischlar said, because the storm began as rain and would have simply washed any salt away, but were brining the roads as the afternoon went on Tuesday.

Even though not much snow accumulated, at one point in the afternoon it was falling in some areas at a rate of about an inch to an inch and a half per hour, which was playing havoc with visibility. 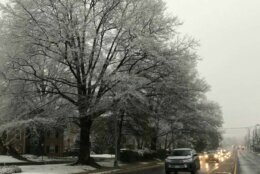 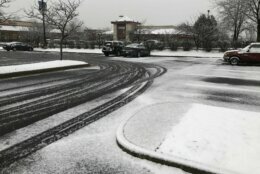 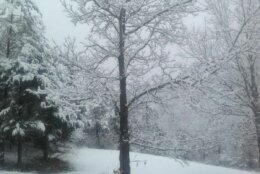 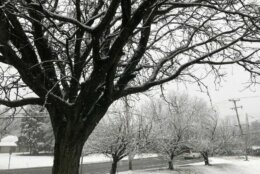 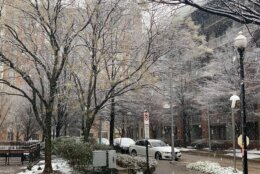 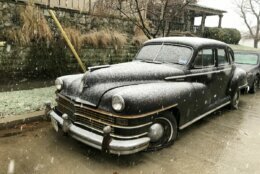 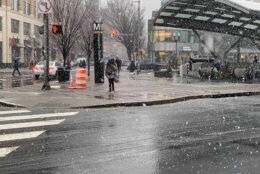 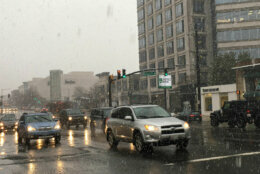 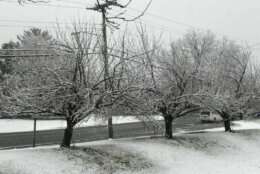 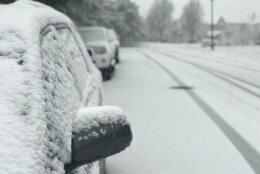 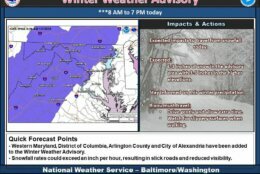 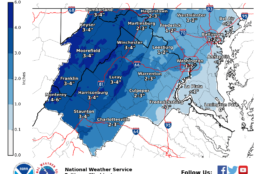 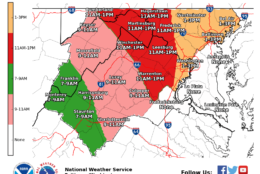 Reada Kessler, in the WTOP Traffic Center, said that the rush of people leaving work and school early caused delays on area roads, though they were mostly volume delays. Increased security at military installations, especially in Bethesda and at Quantico and Joint Base Anacostia-Bolling, slowed down the exodus.

WTOP traffic reporter Dave Dildine said Express Lanes tolls on Interstate 395 and 95 from D.C. to Stafford County were at one point running about $60, an indication of how many people were out on the roads.

The U.S. Office of Personnel Management said all government employees had to depart no later than 1 p.m. Tuesday.

Many of the area’s school systems dismissed students early and some canceled after-school activities.

The Maryland State Highway Administration said it will deploy equipment and treatment as necessary, reminding drivers to “take it slow on ice and snow,” since speed limits are set for dry conditions. The Virginia Department of Transportation will also be treating roads.

Wednesday: Blustery and cold. Mix of clouds and sun. A few scattered flurries. Highs in the upper 30s to mid 40s.

Thursday: Mostly sunny. Highs in the mid to upper 30s.