The D.C. area got another taste of spring storms Friday, and they didn’t stick around long enough to really impact the Friday evening commute.

Be advised, however, that portions of the area will be under a wind advisory through 3 p.m. Saturday.

Severe thunderstorm warnings had been issued for a good portion of the area earlier Friday afternoon, and a tornado warning was even issued at one point for portions of Montgomery County, Maryland, and Fairfax County, Virginia.

Pea-sized hail had been reported in Rockville, Maryland, and a wind gust of 63 mph was reported at Naval Air Station Patuxent River.

Downed trees were also reported in the area. In Prince George’s County, Maryland, the Fire and EMS Department responded to three homes where trees had fallen. Two adults at one home, they said, were displaced but unhurt.

Also in the area, downed wires prompted a scare involving a school bus that was carrying students from Catherine Reed Elementary in Goddard. Prince George’s firefighters held the special-needs students on the bus until Baltimore Gas and Electric crews arrived to confirm that the wires touching the bus were de-energized. 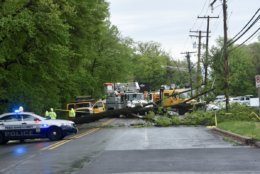 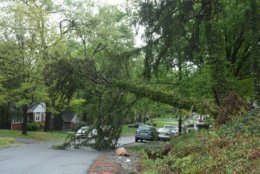 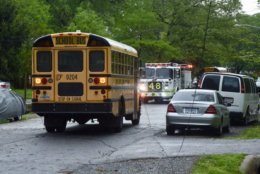 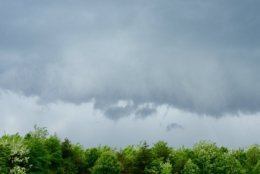 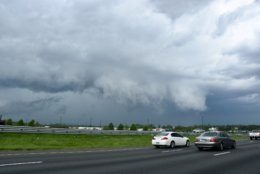 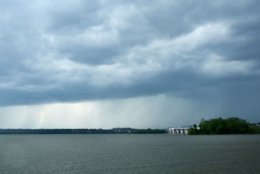 The rain should end around 8 p.m. Temperatures will drop into the 40s tonight, and a chilly start to the weekend is expected.

It will be windy as well. The National Weather Service issued a wind advisory for parts of northern and western Virginia, eastern West Virginia and northern and central Maryland through Saturday at 3 p.m. The strongest winds are expected Saturday morning, with gusts of at least 40 mph.

Sunday will start out fairly sunny but a weak, fast moving storm crossing Pennsylvania will bring some mid/late afternoon cloudiness and a small chance for a few showers.

Sunday: A chance of scattered showers; otherwise partly to mostly cloudy and breezy. Highs in the low 60s to low 70s.

WTOP’s Abigail Constantino and Jennifer Ortiz contributed to this report.