Michael’s death toll rises to 17, including 5 in Virginia

(CNN) — The devastation left by Hurricane Michael in several states is still coming into focus, with coastal Florida cities destroyed beyond recognition, and homes, businesses and agriculture torn or swamped from Georgia to Virginia.

More than 1 million customers were left without electricity, and emergency officials have no access to many towns. The US death toll has risen to at least 17 — including five in Virginia and eight in Florida — and it’s expected to climb.

“I expect the fatality count to rise today and tomorrow as we get through the debris,” Federal Emergency Management Agency Administrator Brock Long said Friday morning.

Michael, which smacked Florida’s Panhandle as one of the most powerful hurricanes to hit the United States, left Virginia’s coast as a post-tropical low early Friday — and its trail of destruction will take weeks to take into account.

Sen. Bill Nelson called the devastation left by Michael “the worst destruction that the Panhandle has seen for however long that I’ve been living. It’s akin to Hurricane Andrew in 1992 where everything was leveled.”

Aerial footage shows coastal cities in the Panhandle, like Mexico Beach, wiped out. Search teams used dogs as they combed the area for people killed or trapped in debris.

One death was reported in Mexico Beach — that of an elderly man found alone, Mayor Al Cathey said. The man’s name has not been released, but authorities said his body was found several hundred yards away from his home.

City manager Tanya Castro said Mexico Beach won’t be up and running for 12 to 18 months.

Nelson said there are not enough resources — food, shelter and water — for those in Mexico Beach who stayed and for those residents returning. In Panama City, he said “there’s going to be a period of time that it’s difficult to get supplies in.”

Dawn Vickers rode out the storm in Mexico Beach, but her house and vehicles were demolished. Without cell phone service or transportation, she has been taking shelter in one of the few condos left standing, invited by someone she met at what’s left of a gas station.

“This has been the worst nightmare I’ve ever been through in my life,” she told CNN on Friday.

A psychiatric hospital in Florida is isolated after downed trees blocked roads around Chattahoochee, and a tree caused a water line to break. The facility is running on power generators, and helicopters have delivered food and water, the state’s Department of Children and Families said. 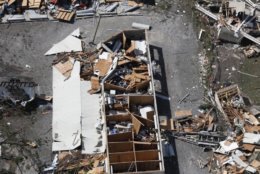 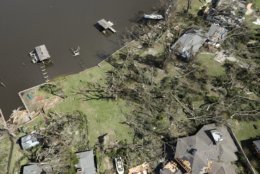 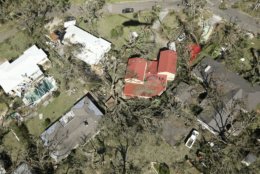 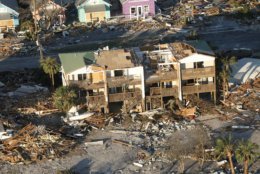 • 17 killed: Eight people have died in Florida, including three fatalities announced Friday in Jackson County, north of Apalachicola. One of those deaths was due to debris, authorities said, and circumstances of the other two deaths were not immediately known. Five people died in Virginia. Four of those drowned, and the fifth was a firefighter who died in a storm-related crash on Interstate 295 in Hanover County, officials said. Three people in North Carolina and a child in Georgia also died.

• Severe crop damage: Georgia officials are receiving reports of damage to pecan, cotton, vegetable and peanut crops. “For me the cotton crop is as bad as it gets. I was picking three bale cotton (this week); today it is gone,” cotton farmer and state Rep. Clay Pirkle said. “Can’t tell the difference between what I’ve picked and what I haven’t.”

• Poultry industry: Georgia’s Department of Agriculture said it received reports that 84 chicken houses — estimated to hold more than 2 million chickens — were destroyed in the storm.

• Public health emergency declared in Georgia: The move will help ensure those who rely on Medicare and Medicaid have access to the care they need, US Health and Human Services Secretary Alex Azar said.

Flooding in the Carolinas and Virginia

The rapid-moving rainfall from Michael triggered flash floods in parts of Virginia and the Carolinas, including areas threatened by swollen rivers during Hurricane Florence.

Hundreds of residents were rescued Thursday from cars, apartments and homes flooded by rushing water.

President Donald Trump tweeted his sympathy for people affected by the storm, saying, “People have no idea how hard Hurricane Michael has hit the great state of Georgia. I will be visiting both Florida and Georgia early next week. We are working very hard on every area and every state that was hit – we are with you!”

In Virginia, the Roanoke River jumped its banks and flooded nearby homes and businesses. Cory Patirlo, who lives near the river, said the impact was unexpected. It was the first time he had nearly 2 feet of water in his home.

“It wasn’t going to get this high, realistically. It never has,” he told CNN affiliate WDBJ.

“I’m gonna be sleeping in my van, with my dogs.”

In the southern Virginia city of Danville, floodwaters turned the Grove Park neighborhood into a virtual lake Thursday, and firefighters checked on a nearly submerged car, photos taken by Jim Heffinger show.

The water receded within hours in some areas, and cleanup was underway Friday. Some people are expected to remain in shelters through the weekend as river levels go down.

Fallen trees have left hundreds of primary and secondary roads closed, he said.

Thousands of residents in the Florida Panhandle are slowly returning to their homes and discovering that everything or almost everything they owned has been reduced to rubble.

Linda Clarke gasped repeatedly at the sight of her once new home in Shell Point Beach — now severely damaged.

There is not much left of what used to be the parish hall of St. Dominic Catholic Church in Panama City. Despite the destruction, the Rev. Luke Farabaugh and his congregation celebrated Mass on Thursday.

“Things, we can replace,” Farabaugh said on CNN’s “Erin Burnett OutFront.” “We’ve seen a lot of signs of hope. … I’ve been telling people … to have hope.

“Hope is that even if the storm does come, even if I lose my car, my house, my family, even if I lose my life, blessed be God,” he said. “Our reward isn’t just in this life but in the life to come. So we’re just trying to give people hope at this point.”

In Mexico Beach, Councilwoman Linda Albrecht learned through online news video that her home was gone.

“Everything in my house, it was almost like it was pushed back with a bulldozer,” she said

“Mexico Beach needs your prayers,” Albrecht said of the town of about 1,200 people. “It’s not the Mexico Beach we know.”

But there are signs of recovery.

The City of Tallahassee reported that 90% of the traffic lights in the city were back online Friday and that power had been restored to 38,000 customers.

Several businesses in the city have reopened, including Walmart, Target and various gas stations.

On St. George Island, a 28-mile-long and 1-mile-wide island off the Panhandle, a few dozen people didn’t evacuate and as the storm raged, those who stayed were surrounded by oncoming water. Security camera video shows water creating its own current in the streets of one neighborhood.

“There were a few points and times when I thought it could happen, that I could die,” said Tiara Walker, who stayed in an apartment on the island. “There was a point in time where I thought the roof was going to fly away, so I flipped a couch over and just tried to prepare for the worst situation.”

Sarah Radney saw trees falling down all around her grandparents’ home when Hurricane Michael roared over Georgia. She was safe until a carport came crashing through the roof, killing her.

“It was just a freak accident, I never heard of anything like that,” said her father, Roy Radney.

Sarah, 11, had just started the sixth grade and joined the drama club and the band. Her father says she loved playing the trumpet, acting and singing.

A man who died when a tree fell on a home near Greensboro, Florida, has been identified as Steven Sweet, 44, according to Lt. Anglie Hightower, the spokeswoman for the Gadsden County Sheriff’s Office. CNN’s Anderson Cooper said Friday on “AC360” that Sweet managed a local car dealership. His wife, Gayle Sweet, was with him when he died.

“He’s one of a kind, so kind he’ll help anybody. Always giving money to people at the stop sign and stuff. He would help anybody,” Gayle Sweet said of her husband.

Three others died in Gadsden County, Hightower said. Authorities did not discuss the circumstances of their deaths, but their bodies have been taken to the medical examiner’s office to determine the cause of death.

In North Carolina, a 38-year-old man died when a large tree fell on his vehicle Thursday on US 64 east of Statesville, Iredell County Fire Marshal David Souther said.

Cooper also said Friday that firefighter Lt. Brad Clark, 43, was killed when a tractor trailer lost control on a rainy highway and hit his truck in Hanover County, Virginia. A colleague said he loved the military, loved his family and loved the fire service dearly.

Two people also were killed Thursday night in Marion, North Carolina, when their vehicle struck a tree that had fallen because of high winds, said Adrienne Jones, deputy director for the McDowell County Emergency Medical Services.

In Nottoway County, Virginia, state police and local authorities were searching for a missing motorist, said Jeffrey Stern, the director of the Virginia Department of Emergency Management Agency. Virginia State Police Superintendent Col. Gary Settle said crews recovered a vehicle but not the person known to be in it.

Hundreds of people have been rescued from the debris, and authorities fear the toll could climb higher as search-and-rescue efforts continue.

Sen. Nelson said Friday on “AC360” that Mexico Beach does not not have enough shelters, water or food.

Nelson said Panama City was “a city in the dark.” A cavalry of utility trucks arrived Friday in Bay County, Florida, according to post from the Panama City Beach Government Facebook page.

Jackson County Emergency Management Director Rodney Andreassen said the county is hoping to get two or three trailers worth of food and water from FEMA but had not yet received them.

A distribution center set up at a Walmart in Jackson County handed out food for a few hours Friday and will be open again Saturday. A Red Cross shelter with food and water has also been set up at Marianna High School

The impact of climate change on storms

Michael’s strength may reflect the effect of climate change on storms. The planet has warmed significantly over the past several decades, causing changes in the environment.

Human-caused greenhouse gases in the atmosphere create an energy imbalance, with more than 90% of remaining heat trapped by the gases going into the oceans, according to the National Oceanographic and Atmospheric Administration.

While we might not get more storms in a warmer climate, most studies show storms will get stronger and produce more rain. Storm surge is worse now than it was 100 years ago, thanks to the rise in sea levels.

And unless the rate of greenhouse gas emissions changes, hurricanes are expected to intensify more rapidly in the coming decades, the scientific research group Climate Central said.

Get the latest delivered to your inbox: Sign up for storm email alerts here.

CORRECTION: An earlier version of this story gave the incorrect surname for storm victim Steven Sweet. It has been corrected.