More severe weather is hampering our region with a flash flood watch in effect for the third straight day for the entire D.C. area and a flood warning in effect for parts of Maryland and Virginia. Here's what you need to know.
Listen now to WTOP News WTOP.com | Alexa | Google Home | WTOP App | 103.5 FM
(1/22) 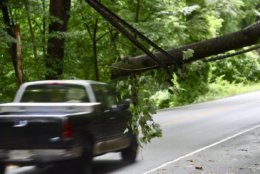 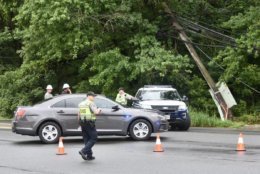 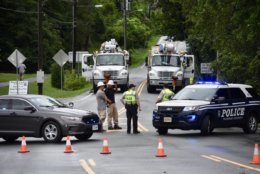 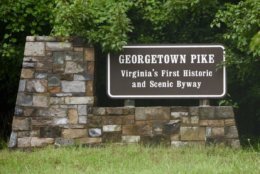 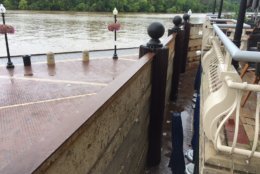 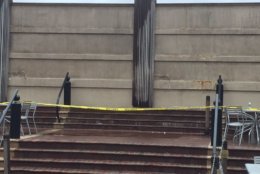 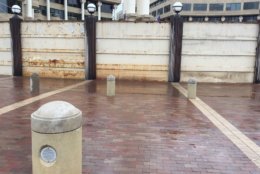 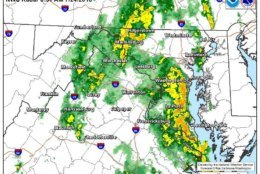 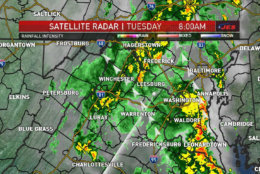 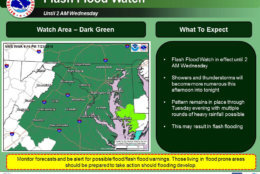 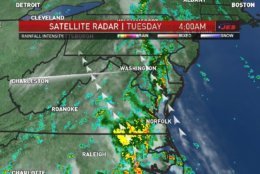 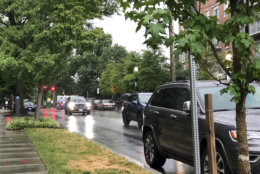 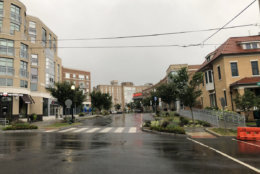 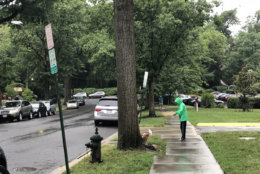 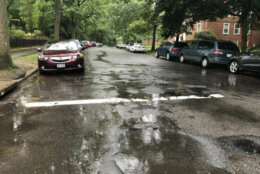 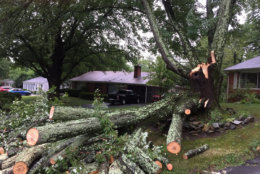 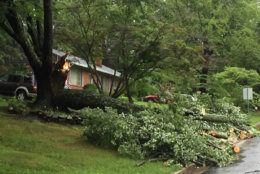 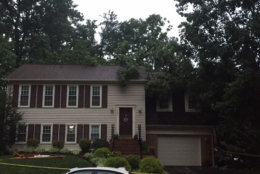 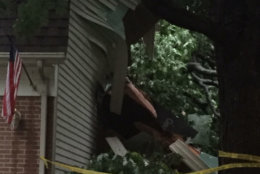 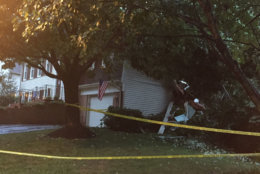 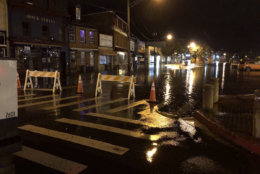 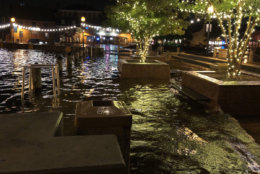 WASHINGTON — The National Weather Service has issued a flash flood watch for the entire D.C. region for the third day in a row. The watch won’t expire until 6 p.m. Wednesday.

Police and meteorologists are warning drivers to avoid high waters.

“There’s some roads that we are closing down and then the water recedes, and then we’re opening them back up, just for a few minutes later, the roads will be closed again,” said Sgt. Aaron Pfeiff with Fairfax County police.

“Slow down, take your time — it’s going to take a little longer than your usual commute,” he added.

A flood warning is also in effect for parts of Maryland and Virginia through Tuesday night.

A flash flood watch means conditions might develop that lead to flash flooding, whereas a flood warning means flooding is imminent or has already begun.

“Waves of rain will continue to move through the region and it’s going to be heavy at times,” said Storm Team 4 meteorologist Lauryn Ricketts. “We’re only going to have more flooded roadways, more downed trees not only through today but through tomorrow.”

Part of the problem is the area is still recovering from the storms over the weekend that dumped as much as 6 inches of rain on Saturday alone in some parts.

The ground is already soaked so the water has no place to go.

With rain falling at a rate of 1 to 2 inches per hour, flooding in parts of the D.C. region is likely.

In Great Falls, Georgetown Pike was blocked east of Walker Road after a truck snagged wires. With the ground saturated, other parts of the byway have been blocked in the past few days as trees topple over.

The weather service said up to 1 inch of rain has already fallen, and local police departments were reporting flooding across the areas, closing several roads.

The good news is relief is in sight.

“An area of high pressure moving across the Great Lakes will push a weather front through on Thursday morning,” Bell said.

“With drier air moving in behind the front, our weather will improve a bit for late week and into the weekend.”

In addition to the handful of flood warnings, the National Weather Service has issued a flash flood watch for the D.C. area through Wednesday afternoon.

The flash flood watch is in effect for the following areas:

“On top of all the rain we’ve had lately, more flooding is likely along local waterways,” Bell said.

A flood warning is in effect for the Monocacy River near Frederick, Maryland, until Wednesday evening. The weather service said the river won’t fall below flood stage until Thursday afternoon.

Some places are taking steps to encourage residents to prepare for possible flooding.

In Charles County, Maryland, residents were able to obtain sandbags to protect their property from the continued rain and flooding.

One storm did produce a tornado warning for parts of Fairfax County for a very short period of time Tuesday morning. The weather service said there was a small, brief circulation in that area that could have downed a few trees if it reached the ground.

Later Tuesday, the weather service confirmed a tornado in Lincolnia, Virginia, just before 6 a.m. that lasted a minute or less. Its estimated maximum wind speed was 70 mph with a path length of 0.25 miles.

The weather service said the tornado touched down briefly south of the softball field at Thomas Jefferson High School, damaging light poles, fences, two sheds and some trees. It also lofted a shipping container over 100 yards as it crossed the field.

Tuesday will remain incredibly humid with a 100 percent chance for rain, Bell said.

The region could dry out Thursday, which is expected to be partly sunny and humid, Ritter said.

“We are stuck in this prolonged pattern as moisture will continue to feed right into the region from the south,” Storm Team 4 meteorologist Lauryn Ricketts said. “Any storms and rain showers will become more scattered in nature on Thursday as the pattern begins to break down.”

Until then, Ricketts said to expect rain chances daily.

Flooding and downed trees are causing some major problems on local roads.

On Maryland Route 175 in Jessup, the westbound ramp to the southbound Baltimore-Washington Parkway is blocked by a downed tree.

In Montgomery County, all lanes are blocked by a downed tree on the outbound Clara Barton Parkway after the Capital Beltway in Bethesda.

Flooding is also causing problems in Annapolis, Maryland. Dock Street is closed due to flooding and Compromise Street is reduced to one lane. The Annapolis Office of Emergency Management warned that water levels could continue to rise leading more street closures.

In Virginia, one southbound lane is blocked due to high water in Woodbridge. The road had been closed earlier.

Multiple roads are closed in Fairfax County, but police note that the roadway conditions are changing frequently with the weather. You can find the complete list of closures on the Fairfax County Police Departments’ website.

In Vienna, Virginia, Lawyers Road is closed between Gunnell Farms Drive and Hunter Mill Road. Hunter Station Road is also closed at Hunter Mill due to water in the roadway.

In Fairfax, Popes Head Drive at Beech Ridge Drive is closed due to a tree.

Arlington Boulevard at Prosperity Avenue has reopened after being closed due to water in the roadway.

In McLean, Swinks Mill Road at Georgetown Pike is closed due to water in the roadway.

The problems are not limited to drivers, MARC’s Brunswink Line trains will be traveling at significantly reduced speeds as a result of flash flood-related speed restrictions.

In Northern Virginia, slightly more than 800 Dominion customers are without power, more than half of them are in Fairfax County.

In Maryland, more than 1,600 BGE customers are without power, but the vast majority of those outages are in Baltimore.

A bit more than 900 Pepco customers are without power, more than 850 of whom are in Montgomery County.

WTOP’s Dave Dildine and Melissa Howell contributed to this report. 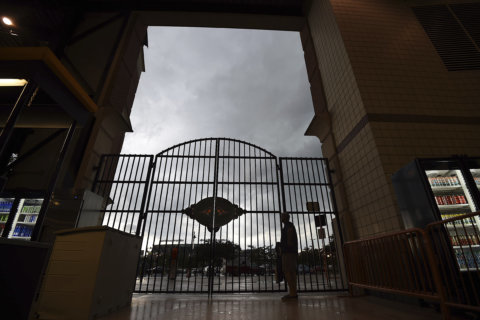 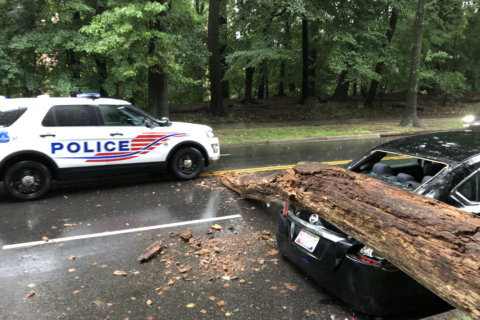