Last dry day: Rain coming and it will last

Friday is likely to be the last dry day for a while as an "ugly" weather pattern settles over the D.C. region, bringing rain showers and thunderstorms every single day for up to a week.
Listen now to WTOP News WTOP.com | Alexa | Google Home | WTOP App | 103.5 FM
(1/4) 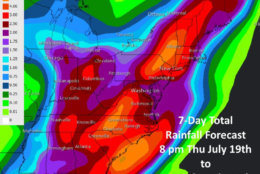 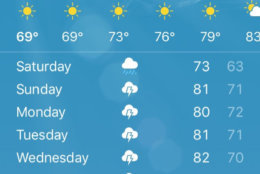 WASHINGTON — Hope you have a sturdy umbrella, definitely some rain boots, perhaps a poncho and … maybe an ark?

Friday is likely to be the last dry day for a while as an “ugly” weather pattern settles over the D.C. region, bringing rain showers and thunderstorms every single day for up to a week.

First, the good news: Friday is set to be a near-perfect day weather-wise, with highs in the upper 80s and low humidity and plentiful sunshine, according to StormTeam 4 meteorologist Chuck Bell.

But the rain arrives late Saturday morning, and a weekend washout seems likely.

Expect rain to start falling across the area about 10 a.m. to 11 a.m. Saturday, Bell said. The immediate area could get an inch of rain or more. And if you’re headed for the beach, be prepared: the coasts will seen even steadier rainfall.

There is a 70 percent chance of rainfall on Sunday, and there looks to be no let-up from the rain in sight.

Bell said computer models are not in agreement about how much rain will fall — either on Saturday or through next week — “but they have strong agreement that rain is coming.”

A trough of low pressure “will remain nearly stationary” over the D.C. area through at least Wednesday, the National Weather Service said, bringing concentrated areas of showers and thunderstorms primarily during the afternoon and evening hours.

The weather service is forecasting the possibility of heavy rainfall with each passing shower and said it will monitor the potential for flooding and flash flooding.

The coming rain is a sharp change in the weather pattern for the month. Until a brief torrential downpour July 17, Reagan National Airport had recorded only a trace of rain for the entire month so far. That’s the only time on record, going back to 1871, that no measurable rain fell in the first 15 days of July, according to the National Weather Service.