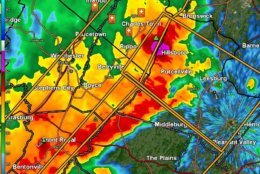 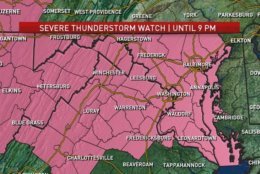 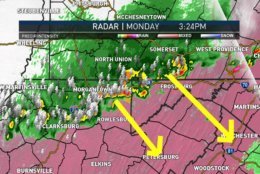 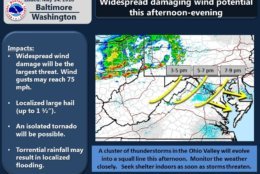 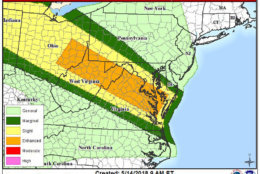 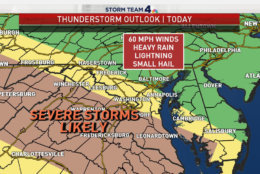 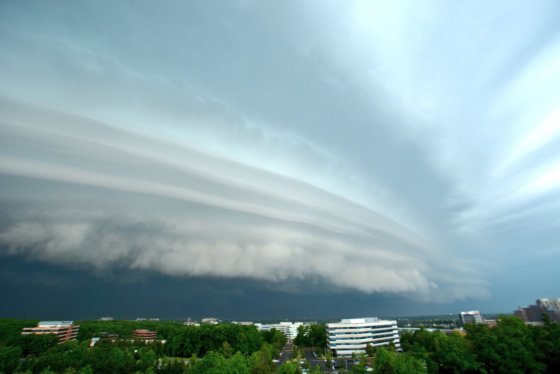 Severe thunderstorms barreled through the D.C. area Monday evening, bringing strong winds and heavy rains. See photos of their impact around the area.

Much of the area was under flash flood warnings as well as severe thunderstorm warnings and watches. Some areas also saw tornado warnings.

Storm Team 4 Meteorologist Lauryn Ricketts said the storms that have hit the region the strongest have weakened but much of the area may still experience heavy rain.

The rain should calm down by around 9:30 p.m., said Ricketts, but plenty of fog may impede drivers into the overnight hours. Drivers should be especially cautious at night when it’s harder to recognize the dangers of flooding, recommended the National Weather Service.

The storms have caused some residents in the D.C. region to experience power outages.

A funnel cloud was spotted in Ashburn, Virginia, at 6:17 p.m., but the National Weather Service said it did not hit the ground.

Damaging winds were the primary threat, with speeds of up to 70 mph, according to the National Weather Service. Among several reports of downed trees was one in which U.S. Route 15 in Gainsville was blocked. Numerous trees were also reported down in the Shenandoah Valley.

Hail the size of a tennis ball was reported falling in West Virginia. Somewhat-smaller hail (1.75 inches in diameter) was later reported in Reston, Virginia, at 6:35 p.m.

Earlier Monday, the Weather Service had said there was potential for a derecho, bringing back memories of the one that hit the area in June 2012.

While the storms have mostly cleared out as of 10 p.m., it’s best to keep that umbrella handy the rest of the week: The chance for severe storms in the D.C. area will continue Tuesday afternoon.

Another chance of strong to severe weather Tuesday evening. It will be very hot (around 90) and extememly humid all through the day tomorrow so be prepared for heavy downpours, strong winds & some hail again Tuesday evening pic.twitter.com/kVtWOcQAFc

“Highs will be near 90, that will help fuel these storms to becoming strong to severe with damaging winds, hail, frequent lightning and heavy rain,” Storm Team4 Meteorologist Sheena Parveen said.

Rain will be a reoccurring theme for the rest of the week as well. Showers are expected to be in the forecast every day through Saturday.

In case of a power outage …