Thousands without power in DC region

While the number of overall outages caused by Friday's windstorm dipped to around 7,000 customers without power, Tuesday night's mix of rain and snow exacerbated the power outages around the D.C. area.
Listen now to WTOP News WTOP.com | Alexa | Google Home | WTOP App | 103.5 FM
(1/2) 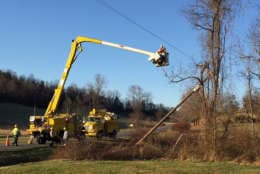 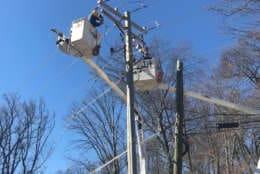 WASHINGTON — While the number of overall power outages caused by Friday’s windstorm fell to fewer than 5,000 customers without power Wednesday morning, a mix of rain and snow that fell upon the D.C. area Tuesday night exacerbated some additional utility disruptions.

Utility crews have been working around the clock since Friday’s storm brought record winds to the area, but thousands of people in the D.C. region — most in Anne Arundel and Baltimore counties in Maryland — are still without power.

Pepco announced Wednesday morning that crews had restored power to all 252,000 customer who were left in the dark from Friday’s windstorm.

The windstorm walloped D.C. with gusts of 50–70 mph. The strongest gust was clocked at Dulles International Airport at 71 mph, which is just below hurricane force of 74 mph.

Power is slowly returning to affected areas. But it could still be days before power will be fully restored.

One badly hit area is off Virginia Route 7, along Utterback Store Road in Great Falls. Dominion Energy crews have 10 bucket trucks and other equipment, replacing transformers and fixing wires. Many in the area are living off generator power, and some have hired lawn care companies to clean up limbs and other debris.

Dominion and several other power companies have called out for extra help to get the lights back on as quickly as possible.

“Our crews have to travel to these unique locations and assess the damage, then move forward to restore the members’ power,” said Ron Harris, vice president of engineering and operations for Rappahannock Electric Cooperative in a news release.

“We will be working around the clock with the REC employees, as well as our mutual aid employees, until all Rappahannock members have their power restored.”

“Our most difficult challenge at this point is broken utility poles. Windblown trees and branches broke more than 100 of them.”

As of about noon Wednesday, there were about 4,600 outages in the D.c. area. Here are the latest numbers:

Montgomery County, Maryland, is asking for the public’s help in reporting storm damage. Residents can use this online form.

Those power outages are still impacting roadways in the region as well.

The Virginia Department of Transportation, for instance, spent all weekend clearing storm debris, but some road closures remain, said agency spokesperson Ellen Kamilakis. When it comes to those remaining closures, she said, crews are mostly in a holding pattern while they wait for power line repairs to conclude.

“Crews continue to work to clear roads of any obstructions that we find. However, most infrastructure is a combination of agencies, which would be transportation, power, gas, water etc.” Kamilakis said.

VDOT crews have been working 12-hour shifts since the prolonged high wind event on Friday. Among the hardest hit areas, the tree- and pole-lined roads in central Fairfax County. Georgetown Pike in Great Falls finally reopened midday Monday after repairs to power lines near Ellsworth Avenue.

“Dominion [Energy] is a close partner of ours, and we appreciate all the hard work that they’ve done to help us reopen our roads,” Kamilakis said.

And in Maryland, about 13 signals across the state are still without power, according to a Monday afternoon update on the Maryland State Police’s Facebook page. Just three minor closures on secondary roads remain. It’s a far cry from Friday, when at one point the winds had caused 140 closures.

“The difficulty of the effort included the fact that on top of road closures we had as many as 70 signals out,” said John Schofield of the State Highway Administration.

Ahead of a possible winter storm, Amtrak’s Northeast Regional and Acela Express services will operate a modified schedule on the Northeast Corridor between Washington, D.C. and Boston on Wednesday.

The latest winter weather storm has been more of a miss than a hit for the D.C. region, though Baltimore, Frederick and Howard counties are under a winter weather advisory until 4 p.m. Wednesday.

The windstorm on Friday was one of the worst the D.C. area has seen in five years.

The National Weather Service said sustained winds stayed at around 40–60 mph on Friday, though gusts were in the 60–70 mph range.

The weather service recorded a gust of 71 mph at Dulles International Airport on Friday, rivaling the 2012 derecho. Wind gusts of 66 mph were recorded at both Catholic University and American University in D.C.

Suburban Maryland saw wind gusts of 69 mph in Gaithersburg in Montgomery County and another one at 67 mph in Upper Marlboro in Prince George’s County.

How long will food last in fridge, freezer without power?

Closings and Delays for Monday, March 5 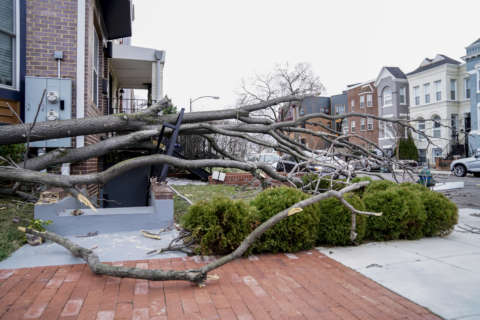 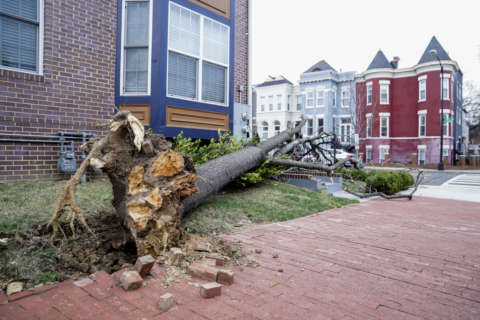