Emergency crews and utilities are working around the clock to get things back to normal after damaging winds that gusted up to 70 mph bombarded the D.C. area.
Listen now to WTOP News WTOP.com | Alexa | Google Home | WTOP App | 103.5 FM
(1/22) 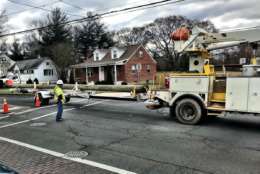 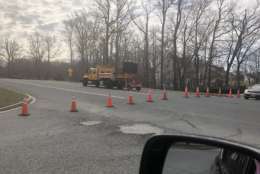 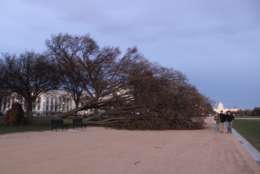 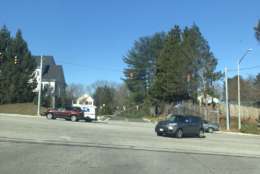 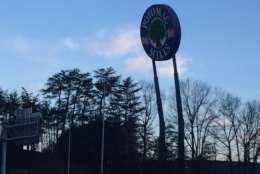 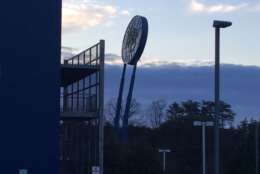 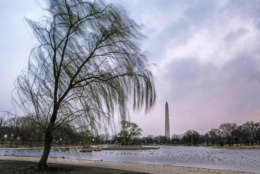 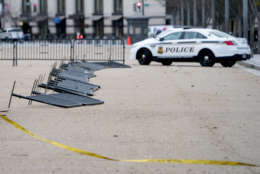 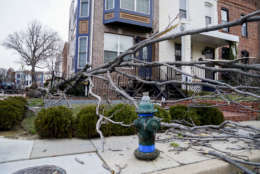 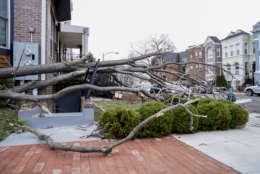 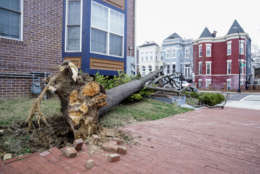 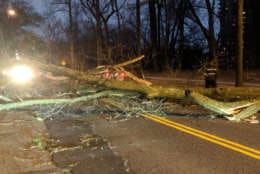 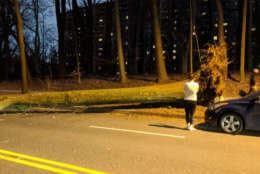 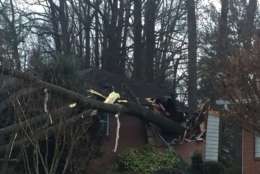 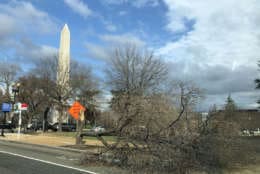 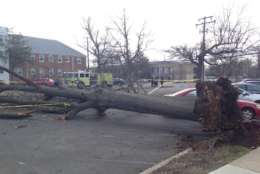 WASHINGTON — The clean up operation continues Sunday, with hundreds of thousands of people still without power, and lingering traffic effects from Friday’s wind storm that brought wind gusts up to 70 mph to the D.C. area.

As of early Sunday, some 150,000 people are still without power. Officials from power companies say it could take days before power is restored to everyone.

Those taking I-95 near Woodbridge can see the iconic Potomac Mills sign that towers above the interstate leaning, thanks to the high winds. Potomac Mills Mall has arranged a crane to remove it, but the winds have to fall below 13 mph first. VDOT said it will not be able to remove the sign until Sunday at the earliest.

Several other roads are being impacted by downed branches, wires and no power to the lights.

On Friday, Virginia Gov. Ralph Northam and Maryland Gov. Larry Hogan declared states of emergency because of the effects of severe winds.

Power is slowly returning to affected areas. But it could still be days before power will be fully restored.

“What we know right now is that it’s a multiday event,” said Kevin Curtis, the Vice President of Technical Solutions at Dominion Power. “As we get a better handle, hopefully later today, we’ll be able to assess, with the additional resources, what the last customer should be restored and we can start projecting for our customers what the long-term restoration effort looks like.”

Curtis said that nearly 700,000 customers and 25 percent of Dominion’s system were affected by Friday’s storm.

Dominion and several other power companies have called out for extra help to get the lights back on as quickly as possible.

As of 6:45 p.m. Sunday, the numbers for the following companies are as follows:

“At this time, it appears most issues are power related, and services should be restored for our customers as power comes back on,” Comcast said in an email.

“In some cases, there is damage related to the high winds and fallen trees, and our technicians are working to restore services as quickly as it’s safe to do so.”

Montgomery County, Maryland, is asking for the public’s help in reporting storm damage. Residents can use this online form.

The winds are diminishing and Sunday will be a relatively nice day, with plenty of sunshine and mild temperatures. But winds will still range from 20 to 30 mph.

The windstorm on Friday was one of the worst the D.C. area has seen in five years.

The National Weather Service said sustained winds stayed at around 40 to 60 mph on Friday, though gusts were in the 60 to 70 mph range.

The National Weather Service recorded a gust of 71 mph at Dulles International Airport on Friday, rivaling the 2012 derecho. Wind gusts of 66 mph were recorded at both Catholic University and American University in D.C.

Suburban Maryland saw wind gusts of 69 mph in Gaithersburg in Montgomery County and another one at 67 mph in Upper Marlboro in Prince George’s County.

Fire departments in Stafford County in Virginia and Howard County in Maryland have issued a ban on open fires throughout the weekend.

Even though the winds have died down since Friday, there are still a lot of traffic headaches left over from the storm.

By far the biggest headache is along I-95, where the damaged Potomac Mills Mall sign continues to cause a lot of problems.

Due to the ongoing situation with the Potomac Mills Sign, a collapse safety zone is in place. In addition, we are enforcing a security perimeter around the incident scene adjacent to Potomac Mills. Please avoid the area and follow police direction. #Advisory pic.twitter.com/9ULV7JHgMe

In a news release at 6 p.m., Prince William County police said VDOT has decided to open Express Lanes with toll from 4 a.m. to 8:30 a.m. to accommodate the bulk of northbound rush hour traffic. But southbound I-95 will be closed from exit 158 to exit 156 during those times if the sign has not been removed.

If the sign isn’t removed, commuters should expect significant delays.

Crews need winds to drop to less than 13 mph so they can repair the sign and on Saturday night, VDOT acknowledged on Twitter they might not be able to remove the sign by the Monday morning commute.

The lanes are expected to remain closed until winds drop to less than 13 mph so crews can actually repair the sign.

Check out the two cranes that @ShoPotomacMills will use when they remove their own sign. Once winds are at a safe speed for crane crews, the mall will take down their sign. Until then our lane closures will remain. @NOVEC @VSPPIO @PWCPolice @VAExpressLanes pic.twitter.com/qU9zNQRlhX

Another major problem on the roadways is power outages knocking out traffic lights.

“We keep trying to get folks to come to all-way stops, I know it doesn’t always happen,” said WTOP traffic reporter Dave Dildine. “You need to be aware, especially aware of other drivers who are not as aware of their surroundings who are just barreling through intersections that are powerless.”

Dildine said the best thing drivers can do is to give themselves extra time and expect that some roads are going to be blocked, if not closed, as crews clean up the damage from Friday’s storm.

“It’s a case-by-case basis,” Dildine said regarding roads reopening. “This is going to be an ongoing affair and we’re going to have to give ourselves extra time to get around.”

Officials with the Maryland Department of Transportation’s State Highway Administration urge drivers to stay informed about conditions and “make smart travel decisions.” Visit www.md511.org for real-time travel alerts and conditions, follow them on Twitter, or “like” their Facebook page.

Multiple Metro lines will be shut down or single-tracking this weekend for scheduled repairs. Riders who take the Blue, Yellow and Red lines will be affected.

Virginia Railway Express canceled its Friday service “out of an abundance of caution due to the severe winds.” Regular service will resume on Monday.

Amtrak said that nearly all service between Boston and Washington is scheduled to operate on Sunday. All scheduled Northeast Regional originations at New York City and Washington, D.C. will operate.

Southbound Auto Train service between Lorton, Virginia and northbound from Sanford, Florida, was canceled and expected to resume on Sunday, March 4.

How long will food last in fridge, freezer without power?