Road crews cut back on salt in Maryland

In an effort to be more environmentally friendly, the Maryland State Highway Administration has reduced its use of road salt by 40 percent over the past three winters -- and more reductions are on the way.
Listen now to WTOP News WTOP.com | Alexa | Google Home | WTOP App | 103.5 FM

WASHINGTON — In an effort to be more environmentally friendly, the Maryland State Highway Administration has reduced its use of road salt by 40 percent over the past three winters.

And the agency is working to cut back on salt even more in the future, said the MSHA’s David Coyne.

“It’s about what’s the least amount of salt we need to use, while still ensuring the public safety during winter events,” Coyne said.

Road salt that’s used in winter can add up to high concentrations that can harm plants and waterways. MSHA’s effort to cut back is part of Maryland’s Statewide Salt Management Plan.

In place of rock salt, the administration is expanding the use of brine, the mix of salt and water that’s used to treat roads before a storm. Such a solution also appears to be effective when squirted on snow during a storm.

“There’s been a lot of study nationally as far as looking at winter application routes where there’s actually spray trucks going out and spraying the routes with liquid only, not putting the rock salt down. And that’s also shown early promise to reduce salt usage while still maintaining effectiveness for public safety,” Coyne said.

That’s why MSHA will be experimenting more with brine this winter.

“This is the first winter where … each county will have one [secondary] route that they designate as liquid-only,” Coyne said. “There’ve been several winters that we’ve tried it in certain areas. Down in our La Plata shop, down in Charles County, they’ve been using it for several years.” 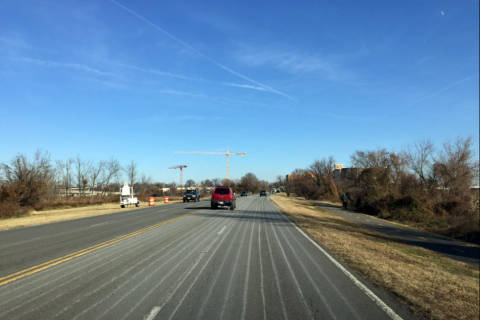 Buckle up for wild weather ride this weekend