Residents in Maryland, D.C. and Northern Virginia began venturing out after sheltering in their homes during a blizzard that pounded the East Coast this weekend.
Listen now to WTOP News WTOP.com | Alexa | Google Home | WTOP App | 103.5 FM
(1/4) 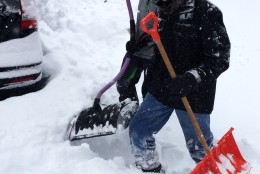 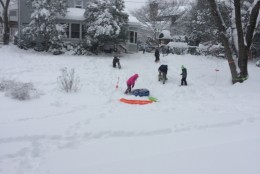 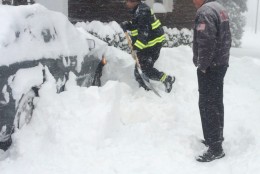 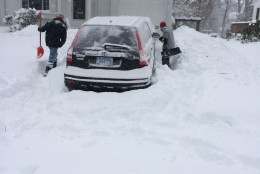 BETHESDA, Md. — After sheltering in their homes since it began snowing on Friday, people from Northern Virginia and D.C. to the Maryland suburbs will begin venturing outdoors on Sunday, stepping into a very deep blanket of snow that seems to cover everything in sight.

The dig out from the neighborhoods will swing into gear. Snowblowers will resound, and men, women and children will shovel snow.

For some it’s a new experience.

“I’m not from this part of the world, so for me this blizzard is kind of a very different experience,” Edwin Goni, an economist from Peru, said on Saturday.

“It’s the first time I see something like this, the snowstorms I’ve seen before have not been this intense,” he says.

In some neighborhoods, the ambitious will make big bucks from the blizzard.

“We shovel driveways, walkways and cleanup cars,” says Kevin Hatcher, a 15-year-old student at Walt Whitman High School. He and his snow-shoveling partner Aaron Bratt, a 14-year-old who also attends Whitman, seem to have as much work as they can handle.

“We have six jobs lined up, and that’s not even people we’ve knocked on their doors, they’re people who’ve called us,” Bratt says. The boys estimate they’ll earn $100 or more each from what’s become known as Blizzard 2016.

The storm has hammered the National Capital Region for days, leaving millions hunkering down.

“Most of the people have listened to the direction of our fire chief. They’ve stayed off the roads, they’re making way for us,” says Capt. Robert Hornbacher, of Montgomery County Fire Department Station 11, Glen Echo Volunteer Fire Department.

Those who ventured outside were impressed with what they saw.

“Pretty amazing. I wasn’t expecting this much,” says Dr. Carlos Piconi, on a walking inspection tour of his neighborhood. “We always hear much comment about how much snow we’re going to get in the Washington area, but it usually doesn’t materialize. This time I feel it’s worse than we expected.”

The blizzard has provided a play land for kids.

“It brings a lot of fun things to do like sledding, snow angels, snowball fights and all that stuff, and snowboarding and skiing,” says Lucas McDowell, a 9-year-old student at Wood Acres Elementary School.

Lucas and other kids made repeated slow runs on an inner tube downhill, in an attempt to pack the deep snow for fast sledding.

“The sled really goes on the track by itself if you aim it in the right spot, even if you have a couple of curves it will be like varoom,” says Annelise Schiebler, a 10-year-old who also attends Wood Acres.