At the onset of the 2022-23 regular season, it was clear who the Wizards' top-three scorers were likely to be with Bradley Beal, Kristaps Porzingis and Kyle Kuzma representing a well-established first tier on their roster. After that, there would have been some debate over which player would be fourth.
Listen now to WTOP News WTOP.com | Alexa | Google Home | WTOP App | 103.5 FM

WASHINGTON — At the onset of the 2022-23 regular season, it was clear who the Wizards‘ top-three scorers were likely to be with Bradley Beal, Kristaps Porzingis and Kyle Kuzma representing a well-established first tier on their roster. After that, there would have been some debate over which player would be fourth.

Still, few would have likely guessed it would be Corey Kispert. While he was the Wizards’ 2021 first-round pick, he is in just his second year and missed over a month, including eight regular season games, to begin the year with an ankle sprain.

Now, Kispert is not the team’s fourth-leading scorer, that would be Rui Hachimura. But Kispert is fifth on the team in points per game (9.8) has been quite easily the Wizards’ best shooter. Through 16 games, he’s knocking down 54.4% of his shots overall and 46.2% from three on 4.1 attempts per game.

Kispert dropped 16 points in a loss to the Lakers on Sunday night, shooting 6-for-8 from the field and 4-for-6 from deep. Now over his last 14 games, Kispert is 30-for-57 from the perimeter, good for an astronomical 52.6%.

Kispert is shooting extremely well and is demonstrating the upside that made him the 15th overall pick a year and a half ago. He seems to be headed down a track to where the Wizards will have to find ways to get him more shots.

That, however, could conflict with the way Kispert plays. His game is moving without the ball, running off screens and cutting through the lane to get open and wait for teammates to find him. He’s not the type to create for himself off the dribble.

So, for now, the Wizards like the role Kispert is in.

“He’s never going to be a guy I think that hunts it,” head coach Wes Unseld Jr. said. “I think he knows what’s a good shot. Obviously, if he’s open we feel pretty confident that it’s going to go in, but we’re not running a ton of action just to get him quick catch-and-shoots. I think at times when he heats up, that’s certainly an option. But he finds it in the flow of the game, which I think is great.”

Right now Kispert is averaging 6.8 field goal attempts per game, eighth on the team and fewer than Rui Hachimura (9.9), Monte Morris (8.0), Will Barton (7.5) and Deni Avdija (6.8). His shot profile is reflected well by the numbers, as of his 4.1 three attempts per game, 3.8 of them are on catch-and-shoot plays. He has knocked down 47.5% of those shots.

Kispert has attempted only four pull-up threes, making one of them. His cuts and catch-and-gos have led to him making 19-of-23 in the restricted area (82.6%).

With so many catch-and-shoot threes and cuts to the basket, 75.7% of Kispert’s attempts have come with zero dribbles. So, in order to get Kispert more shots, the Wizards may have to call some plays for him. Playing him more minutes may be tricky given he’s already fifth on the team at 26.6 per game.

It should also be noted that Kispert is comfortable playing in his current role, and seems to be content with how he is operating within it.

“This is exactly the way that I want to play. I have always needed to be more aggressive versus less aggressive and hunt my shots versus not hunt my shots. This has just kind of proven to me that if I can get threes up, it’s a good thing. I’m going to keep shooting them and keep hunting them and keep being really, really aggressive because this team needs 3-point shooting especially and I kind of fit that role perfectly,” he said.

Kispert’s role in the short-term may be affected by a hamstring injury to Bradley Beal, as the Wizards star left Sunday’s game and is set to be evaluated further. Any time Beal misses games, Kispert is usually the one who gets the bump into the starting lineup as his replacement.

But all things being equal, more responsibility for Kispert could help the Wizards in a key area, as their bench has been an overall weakness this season. The Wizards’ second unit ranks 24th in the NBA in net rating (-3.2) and 22nd in offensive rating.

Kispert’s efficiency could help the Wizards fix that. 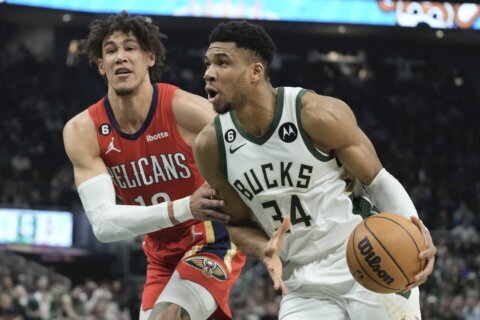 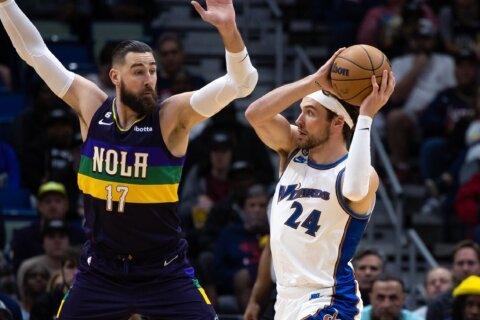