The Wizards returned from a brief holiday break to find coal in their stockings in a 117-96 loss to the 76ers at Capital One Arena on Sunday. Here are a few takeaways from the team’s loss to the 76ers.
Listen now to WTOP News WTOP.com | Alexa | Google Home | WTOP App | 103.5 FM

The Wizards returned from a brief holiday break to find coal in their stockings in a 117-96 loss to the 76ers at Capital One Arena on Sunday.

Here are a few takeaways from the team’s loss to the 76ers:

But in the middle two quarters, the 76ers ran the lead up to 20 and turned a once-Wizards lead into a blowout by the end of the third quarter.

In a 31-point first quarter, the Wizards’ offense flowed freely as the team knocked down open looks from all over the floor. In the second and third quarters, the looks were decent, but they just didn’t fall.

Joel Embiid was exactly as the Wizards remembered him.

In 30:39 on the floor, Embiid scored 36 points and had 14 rebounds in a physically dominating performance. The Wizards tried to help as much as they could on Embiid, but it wasn’t enough to slow down The Process as his mix of offensive power and defensive presence presented more problems than the Wizards could handle.

Late in the third quarter, things got a bit testy between Embiid and Montrezl Harrell.

On one possession, Embiid was fouled by Harrell and when the two regained their balance, they got locked in a shoving match. Both were given technical fouls.

Just a few moments later, Harrell went up for a monstrous slam on the offensive end of the floor. Embiid returned serve with a strong and-one surrounded by multiple Wizards, but when he landed, he got a fairly light shove from Harrell. That was enough to get him ejected, though, as the Wizards played the final quarter and change without Harrell, who was sent to the locker room early.

With three Wizards in COVID protocol, including two regular starters, the Wizards turned to rookie Corey Kispert for the second game in a row.

He played a season-high 35:04 on the floor and finished 3-of-9 from the floor for eight points. He also went 0-for-5 from 3-point territory.

Kispert’s minutes will likely reduce with the return of the COVID protocol players, but for now, it’s good experience for the first-year pro.

The Wizards were without Raul Neto, who was placed in health and safety protocol just before tip off Sunday. He joined Beal and Caldwell-Pope on the list.

Coach Wes Unseld Jr. said Beal and Caldwell-Pope were awaiting negative tests, but were feeling good in their quarantine away from the team.

Absent Neto, the Wizards relied on another heavy night from Kispert and played both Aaron Holiday and Spencer Dinwiddie. 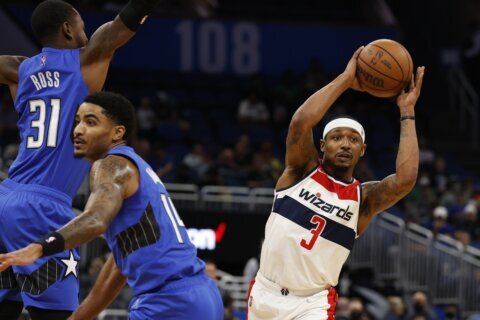 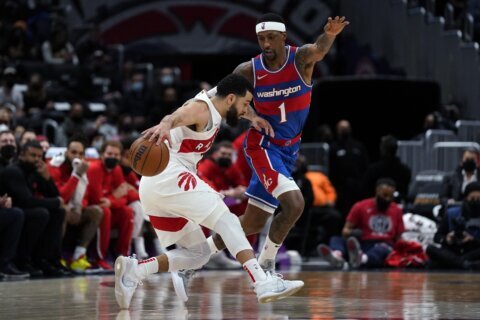 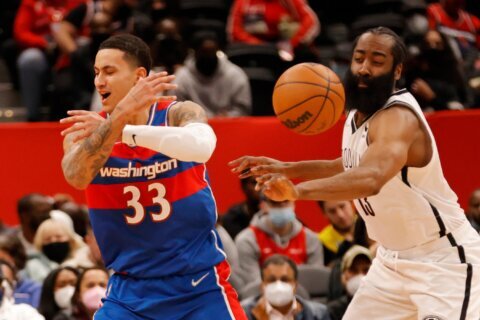