Trae Young, wearing Kobe Bryant's No. 8 jersey, had 45 points and 14 assists in an emotional game for the first-time All-Star, and the Atlanta Hawks beat the Washington Wizards 152-133 on Sunday night.
(1/4) 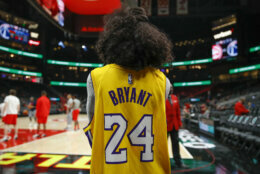 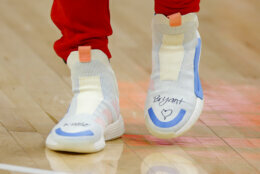 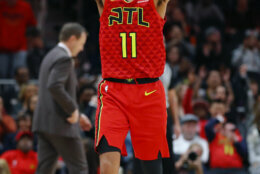 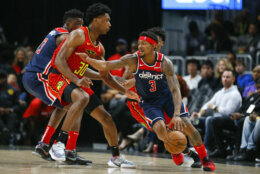 ATLANTA (AP) — Trae Young had to compose himself a couple of times when asked to recall what Kobe Bryant meant to him. It wasn’t easy.

“One of the last conversations we had, he was just telling me how much he’s seen my game progress and he’s just been happy for me,” Young said between pauses. “He said how proud he was of me and how he wants me to continue to be a role model for kids growing up.”

Young had 45 points and 14 assists in an emotional game for the first-time All-Star, and the Atlanta Hawks beat the Washington Wizards 152-133 on Sunday night.

Young looked up toward the rafters several times to honor Bryant, his mentor and favorite NBA player, who died in a helicopter crash earlier in the day. Young wore a No. 8 jersey to acknowledge Bryant during the first few seconds of the game and dressed up his shoes with a heartfelt tribute as well.

Trae Young is the first player to have a 45-point double-double with under 25 field goal attempts against the Washington Wizards, since Kobe Bryant on December 17, 2006. pic.twitter.com/xHFewuzb7Z

Young, who wears No. 11, had on a Hawks No. 8 jersey to honor Bryant at the start of the game, and both teams agreed to give a nod to Bryant at the outset. Young grabbed the opening tip and deliberately turned the ball over after eight seconds. The Wizards followed with a 24-second violation. The crowd cheered both times as the teams acknowledged Bryant’s career jersey numbers. After the Hawks called a timeout, Young switched back to his regular jersey number.

The Hawks, who have endured a tough season as the worst team in the Eastern Conference, had lost three of four before setting a season scoring high. De’Andre Hunter finished with 25 points, Kevin Huerter had 18 and John Collins 16, but this game belonged to Young, who surpassed 40 points for the eighth time this season, second-most in the NBA.

Young was sublime in the first half, scoring 21 points, handing out 10 assists and hitting a buzzer-beater from halfcourt.

Young has said periodically during his first two NBA seasons that Bryant has helped in his career development and was his favorite player when he was growing up in Oklahoma. Young was proud that Bryant’s 13-year-old daughter Gianna, who also died in the crash, was one of his biggest fans.

The Hawks took their first double-digit lead late in the second when Huerter stole an inbounds pass and hit a layup. Atlanta was up 78-72 at halftime.

The Wizards pulled within 17 at the end of the third when Troy Brown Jr. banked in a 42-footer at the buzzer.

“Trae, he’s a problem,” Washington coach Scott Brooks said. “He’s a handful. He’s an All-Star for all the right reasons. He’s a hard guy to guard. He was making his shots and getting guys involved.”

Wizards: Reserve G Isaac Bonga left late in the second quarter after Young dove for a loose ball and landed on his head, slamming Bonga’s jaw against the floor. Bonga was escorted off the court by trainers and held a towel against his bloodied mouth. Washington ruled him out for the second half with a fractured tooth. … Reserve G Jordan McRae exited late in the third with a leg injury.

Hawks: Reserve G DeAndre’ Bembry was sidelined for a third straight game and his second in a row with right hand inflammation.

Nearly everyone in the arena stood for a moment of silence before the game to honor Bryant, the retired 18-time All-Star and five-time NBA champion. The crowd then joined together for a chant of “Kobe! Kobe! Kobe!” with his image displayed on the video board.

During the national anthem, Vince Carter, who turned 43 on Sunday and played against Bryant’s Lakers and alongside him on national teams throughout a decades-long career, wiped away tears. Young clasped his hands together and bowed his head.

“The conversations tended to change and were more friendly, especially in his last year,” Carter said after the game. “He was extremely fun, and we were still laughing and joking.”

Wizards: At Milwaukee on Tuesday.

Hawks: At Toronto on Tuesday.