The score does not matter in the preseason, but could we have seen a possible blueprint to what the Redskins are going to be this season?
Listen now to WTOP News WTOP.com | Alexa | Google Home | WTOP App | 103.5 FM

The score does not matter in the preseason, but could Thursday’s game have been a possible blueprint to what the Redskins are going to be this season?

It was a stifling performance by the starting defense and an offense performance good enough for a 19-7 win in Atlanta.

The main bright spot to take away from Thursday night was second year running back Derrius Guice seeing his first bit of action since tearing his ACL in the preseason opener a year ago. Guice picked up 7 yards on his first touch and looked comfortable out there and showed flashes of what the Redskins running game could look like this year. Guice finished the night with 44 yards on 11 carries. He took some hits and kept on going, which was what Jay Gruden really wanted to see from him.

Another bright spot was wide receiver Cam Sims. He has probably already locked up a roster spot, but didn’t hurt his cause with four catches for 48 yards.

Case Keenum started and completed nine-of-14 passing for 101 yards including a lost fumble while Dwayne Haskins relieved him and again showed signs of being the Redskins quarterback of the future. He led three second-half scoring drives going 7-13 for 74 yards in the second half.

Running back Samaje Perine has had a rough couple weeks but bounced back nicely on Thursday with four carries for 16 yards and a touchdown. Perine is in the battle for the fourth running back spot.

The not so good news of the night comes from Jordan Reed. He took a helmet-to-helmet hit and was being evaluated for a concussion. Reed probably had the best camp of anyone in Richmond and proved he is healthy to start a season for the first time in almost three years. He has had his concussion issues, and it’s unfortunate that he suffered the hit. Gruden said after the game that he had symptoms and is being evaluated.

The preseason finale is next Thursday at home against the Ravens. 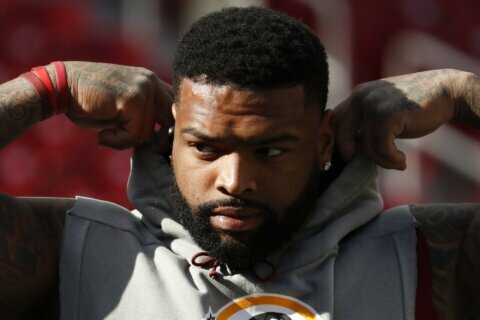