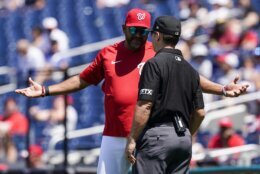 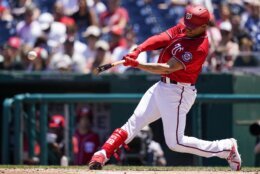 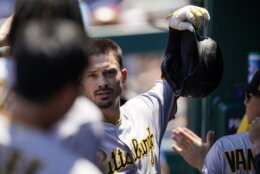 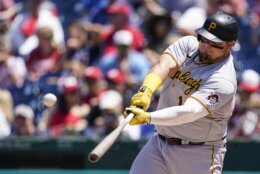 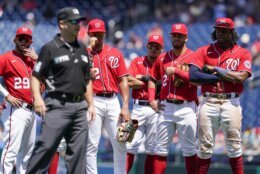 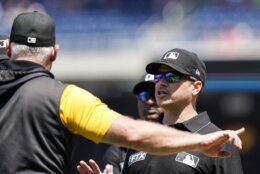 WASHINGTON (AP) — Bryan Reynolds hit a career-high three homers and drove in six runs to lead the Pittsburgh Pirates over the Washington Nationals 8-7 on Wednesday.

“I think Bryan Reynolds carried us to a win tonight,” said Pittsburgh manager Derek Shelton said, whose Pirates ended a five-game losing streak. “We kind of jumped on his shoulders.”

Reynolds had a two-run homer in the first inning off starter Paolo Espino and a solo drive in the sixth off Carl Edwards Jr. (2-2). Edwards exited with two runners on base in the seventh, giving way to Kyle Finnegan.

After Ke’Bryan Hayes struck out, Reynolds launched Finnegan’s elevated sinker into the visitors’ bullpen in left-center for a three-run homer that put the Pirates up 8-6. It was Pittsburgh’s only hit in 18 at-bats with runners in scoring position during the series.

“I guess it feels kind of surreal,” Reynolds said. “It was a good day at the plate.”

Reynolds struck out swinging in the ninth when he came up with a chance to tie the major league record of four home runs in a game. But the six RBIs are a career high for Reynolds, who became the second Pirates player to homer three times in a game this season (Jack Suwinski did it June 19).

The Pirates denied Washington its first three-game home sweep of Pittsburgh since June 14-16, 2021. Yadiel Hernandez homered for the Nationals, who stranded 10 runners and had won three in a row and six of eight.

“First professional save in a situation where we’ve lost five games in a row, I give Yerry a ton of credit,” Shelton said. “He stayed probably a lot calmer than I was.”

Pittsburgh scored its fourth run in unusual fashion. With one out in the fifth inning and the score tied at 3, Hoy Park was on second and Suwinski was on third. Hayes lined to Washington first baseman Josh Bell as both runners took off. Bell threw to third baseman Ehire Adrianza, who tagged Park and then stepped on the base.

Umpires invoked the “fourth out” rule, since Washington did not ask for an appeal before its pitcher and infielders left the field. Since Suwinski crossed the plate before Park was tagged, his run counted even though he hadn’t tagged up.

“When the third baseman tagged the runner, the third base umpire pointed and said, ‘He’s out. The runner’s out for the third out,’” crew chief Mark Wegner told a pool reporter. “Now at that point, if the third baseman wants to say, ‘I want to appeal that the guy that just scored from third left early,’ then we can call what’s called the ‘fourth out’ and then he can step on the base for that. But it has to be an intentional type thing.”

Washington manager Dave Martinez remained frustrated with the call after the one-run loss.

“I felt like we did everything right,” Martinez said. “We caught the ball. He threw it. He tagged the runner and the base. They said he didn’t touch the base.”

Pirates: RHP JT Brubaker (1-7, 4.14 ERA) gets the ball as Pittsburgh returns home Thursday to begin a four-game series against Milwaukee.

Nationals: Washington has Thursday off. RHP Josiah Gray (6-4, 3.82) starts Friday in the opener of a four-game series against Miami as the Nationals’ homestand continues.