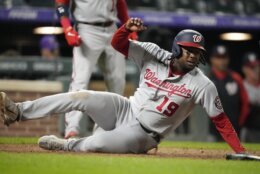 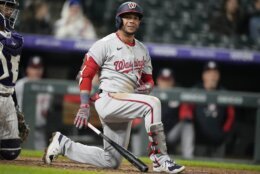 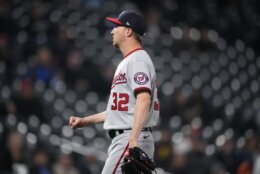 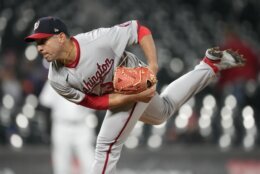 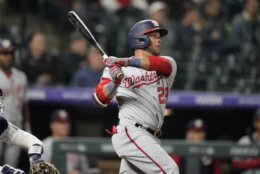 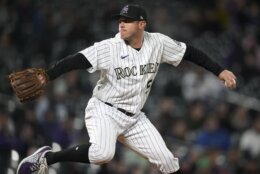 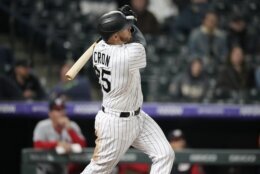 “For me, you can never score enough runs in this ballpark,” Nationals manager Dave Martinez said. “The big thing, like we talked about, you score early but you’ve got to keep working good at-bats. They did that tonight. It was awesome to see Juan hit the ball like he did today and Bell going the other way. We’ve got another game tomorrow and we’ll try to repeat.”

The Nationals have won three of four to start their nine-game road trip after going into it off an eight-game losing streak.

“I know a lot of our bats were frustrated there for a little while,” Fedde said. “It just seemed like there’s lots of hits all across the lineup. That’s huge. I think a lot of guys are settling in the rotation and throwing the ball well and we’re playing great defense. That’s a mixture for success.”

Fedde (2-2) limited the Rockies to six hits and a run on Randal Grichuk’s RBI forceout in the third inning. He struck out three and walked two to reverse his fortunes at Coors Field, where Fedde had gone 0-2 with a 9.00 ERA in four previous appearances here.

“I thought I was ahead in a ton of counts and winning 1-1 counts as well,” Fedde said. “It was just something I had been struggling with and falling behind hitters in the last couple starts prior (at Colorado). Today, I don’t think I got a curveball to my glove side all day, but I thought my sinker and cutter were really effective and I just kind of ran with them.”

C.J. Cron connected for his ninth homer of the season in the eighth inning off reliever Erasmo Ramírez for Colorado.

Germán Márquez (0-2) allowed seven runs on 10 hits in five innings, extending a rough stretch over his last three starts in which he has given up 15 earned runs in 14 2/3 innings for a 9.20 ERA in that span.

“I’ve been working so hard to fix the little things,” Márquez said. “But things aren’t working right now. I have to keep my chin up and keep going.”

Bell finished with three hits, including a three-run homer off Márquez in the third.

Victor Robles’ sacrifice fly in the fourth extended the Nationals’ lead to 4-1 and Soto connected for his fifth homer of the season leading off the fifth. Ruiz capped Washington’s three-run fifth with a two-run single and Hernández had a two-run double in the seventh. POWER AT THE PLATE Cron, who went 3-for-3, moved into a tie with Anthony Rizzo and Aaron Judge for the major league lead in homers. He leads the Rockies with nine multi-hit games. Since last Aug. 1, he’s batting .340 and leads the majors with 15 home runs and 51 RBIs.

Manager Dave Martinez took advantage of the Nationals’ off day Monday to do some fly fishing in Colorado. He said he caught an eight-pound rainbow trout.

Rockies: INF-OF Garrett Hampson was reinstated from the 10-day injured list after recovering from a right-hand contusion.

Washington LHP Patrick Corbin (0-4, 8.69 ERA) will be seeking his first win of the season when he starts Thursday night against Colorado’s LHP Austin Gomber (1-2, 3.86 ERA).