HOUSTON (AP) — The Latest on Game 1 of the World Series (all times local):

Jorge Soler followed up his historic leadoff homer by driving in another run on a fielder’s choice grounder to put the Braves up 3-0 after two innings in Game 1.

The Braves had a chance to add more, but left the bases loaded when Austin Riley struck out on the 44th pitch thrown by Astros starter Framber Valdez.

Travis d’Arnaud and Joc Pederson had consecutive singles to start the second before both advanced a base on No. 9 batter Dansby Swanson’s flyout to deep center. Soler then hit a grounder fielded by shortstop Carlos Correa, who threw to third baseman Alex Bregman to get out Pederson while d’Arnaud was crossing the plate. Freddie Freeman then walked and Ozzie Albies had his second infield single before the strikeout by Riley.

Atlanta starter Charlie Morton, the former Astros pitcher, had a 1-2-3 bottom of the second. That started with Yuli Gurriel’s comebacker that ricocheted off Morton to first baseman Freeman, who later snagged Martin Maldonado’s liner for the final out.

Soler led off the 117th World Series with a homer, the first ever in the top of the first inning in Game 1 of a series, and Riley added a RBI double for an early 2-0 lead.

Valdez, who allowed one run over eight innings in Game 5 of the AL Championship Series against Boston, has already allowed six hits over two innings against the Braves.

Jorge Soler got this 117th World Series off to a smashing start.

Soler became the first player to hit a home run while leading off the top of the first inning in Game 1, lining a drive into the left-field seats at Minute Maid Park.

The aggressive Braves weren’t done, either. Ozzie Albies beat out an infield single with one out, stole second and scored when Austin Riley doubled on a 3-0 delivery.

Braves starter Charlie Morton, who won Game 7 of the 2017 World Series for the Astros, also struggled at the outset. He gave up a one-out single to Michael Brantley, walked ALCS MVP Yordan Alvarez with two outs and walked Carlos Correa to load the bases.

After a visit from pitching coach Rick Kranitz, Morton escaped, thanks to a nifty play by second baseman Ozzie Albies on a grounder by Kyle Tucker.

Atlanta’s Jorge Soler has become the first batter ever to lead off a World Series with a home run.

Making his first start since returning from a positive COVID-19 test, Soler led off Tuesday night’s game with a drive to left off Houston’s Framber Valdez.

The 29-year-old Cuban took Valdez’s first two pitches for balls. Valdez then threw his third straight sinker, and with catcher Martín Maldonado set up low and outside, left the ball over the middle of the plate.

Soler, who had 14 home runs during the regular season, drove the 93.7 mph offering 382 feet, and it landed about four rows deep into the Crawford seats behind the 19-foot high left-field scoreboard.

After Atlanta manager Brian Snitker was introduced, he looked across the field at his son, Houston’s co-hitting coach Troy Snitker and made an encouraging gesture.

Houston manager Dusty Baker and Brian Snitker embraced at home plate and he smiled and waved at good friend and Atlanta third base coach Ron Washington.

Emmy Award winner Keke Palmer sang a perfect rendition of the National Anthem. Her outfit, a stunning gold sequined jacket and skirt combination, glittered under the lights of the ballpark.

Astros Hall of Famer Craig Biggio, who spent his entire 20-year career in Houston, threw out the ceremonial first pitch. It was a perfect strike to infielder Aledmys Díaz.

Tremaine Jones, of the Boys & Girls Clubs of Greater Houston, delivered the game ball to the mound. He was accompanied by Astros Hall of Famer Jeff Bagwell.

Johnson was drafted in the franchise’s second year and is the team’s all-time leader in yards receiving, piling up 13,597 in 12 seasons. He wore an orange Astros jersey with his name and No. 80 on it.

“Based on the weather forecast it’ll be open tomorrow,” he said before Tuesday’s game.

Morning thunderstorms are expected Wednesday, but it is predicted to be clear with a temperature of 72 degrees for first pitch.

The roof has not been open this postseason and is rarely open during the season because of the hot and humid Houston weather.

It will be the sixth career postseason start, and second this year, for Urquidy. He allowed six runs (five earned) in only 1 2/3 innings against Boston in Game 3 of the AL Championship Series.

“It means a lot for me for sure. It’s going to be a big game for me for the team. I know that I have to win,” Urquidy said through a translator. “My last outing was for sure bad, I know, but there’s good days and bad days. I’m excited to compete, and I know that a lot of people are watching me for sure.”

Urquidy was the winning pitcher as a rookie in Game 4 of the 2019 World Series against Washington.

“Max is the natural to go No. 1 in Game 2,” Braves manager Brian Snitker said.

Second baseman Jose Altuve hits leadoff for Houston in the World Series opener against the Atlanta Braves on Tuesday night, among six Astros remaining in the lineup from Game 7 of the 2019 World Series.

Left-hander Framber Valdez is on the mound.

Jorge Soler moved up to the Atlanta Braves’ leadoff spot for the opener against the Houston Astros and right-hander Charlie Morton.

Right-hander Kyle Wright and outfielder/pinch-runner Terrance Gore were added to the Atlanta Braves’ roster ahead of the opening World Series game against the Houston Astros, and right-hander Jacob Webb and infielder Johan Camargo were dropped.

Wright has not made a major league appearance since June 23. The 26-year-old last pitched on Oct. 2, throwing seven shutout innings for Triple-A Gwinnett against Jacksonville. He was 0-1 with a 9.95 ERA in two big league games this year and 10-5 with a 3.02 ERA in 24 starts for Gwinnett.

Wright started twice in the 2020 playoffs, throwing six scoreless innings against Miami to win Game 3 of the Division Series and allowing seven runs while getting just two outs in taking the loss to the Los Angeles Dodgers in Game 3 of the Championship Series. Current Braves teammate Joc Pederson hit a three-run homer and Edwin Ríos followed with a solo shot.

Gore was on the roster for the Division Series against Milwaukee and made one appearance, pinch running for Pederson in Game 2.

Gonzalez, a member of Houston’s 2017 World Series champions, has not played since the final game of the regular season on Oct. 3. He hit .176 in 34 at-bats after the Astros signed him in August following his release from Boston.

Meyers injured his left shoulder crashing into a wall during Game 4 of the Division Series on Oct. 12 and has not played since. 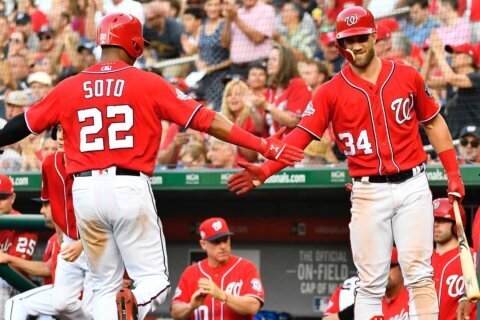 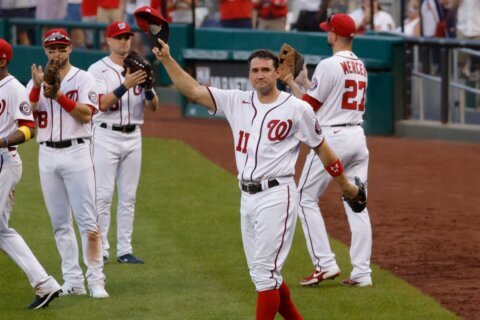 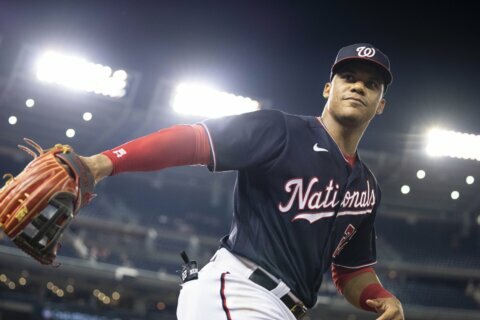