The Washington Nationals canceled their workout scheduled for Monday, citing a lack of results for the COVID-19 tests the team took on Friday, and said the summer camp and shortened season are "at risk" over the issue.
Listen now to WTOP News WTOP.com | Alexa | Google Home | WTOP App | 103.5 FM

The Washington Nationals canceled their workout scheduled for Monday, citing a lack of results for the COVID-19 tests the team took on Friday, and said the summer camp and shortened season are “at risk” over the issue.

Mike Rizzo, the Nationals’ general manager and president of baseball operations, said in a statement Monday that the players and staff had all gotten tested on Friday, the first day of training in Summer Camp, in accordance with Major League Baseball’s protocol.

“Seventy-two hours later, we have yet to receive the results of those tests,” Rizzo said. Manager Davey Martinez said on Sunday that two players, whom he did not identify, had tested positive.

“We cannot have our players and staff work at risk,” Rizzo said in the statement announcing the cancellation of the workout at Nationals Park. “We will not sacrifice the health and safety of our players, staff and their families.”

He added, “Without accurate and timely testing it is simply not safe for us to continue with Summer Camp. Major League Baseball needs to work quickly to resolve issues with their process and their lab. Otherwise, Summer Camp and the 2020 season are at risk.”

Martinez said Sunday the two positive in-take tests happened in the middle of last week and the players who tested positive had not reported to Nationals Park.

Martinez said some of the 60 players tested were still awaiting results.

“Obviously, this is all new for everybody,” Martinez said. “We’ve hit some bumpy roads. But they’re doing the best they can. I know they are. They’re working on cleaning everything up. We’re in a very, very different situation. No one’s ever done this before. So I know they’re working out all the bugs.”

Reliever Sean Doolittle, who is still on the fence about playing this season, said Sunday he still hadn’t gotten his Friday test results back.

“That’s one thing that makes me a little nervous,” Doolittle said. ”We’re not getting tests back in time. They still haven’t sent us the PPE. We’re supposed to have N-95 masks, stuff like that, gowns, gloves. We’re supposed to have that stuff, we don’t have that stuff. Those are the things it’s going to take for people to stay safe enough for us to continue this season.”

The Nationals have so far had three players opt out of playing this season: first baseman Ryan Zimmerman, pitcher Joe Ross and catcher Welington Castillo.

Atlanta Braves outfielder Nick Markakis on Monday became the latest high-profile player to choose not to play this season. Los Angeles Dodgers pitcher David Price, Colorado Rockies infielder Ian Desmond, and Braves pitcher Félix Hernández are among those who have opted out.

The Houston Astros, who lost to the Nationals in the World Series, also called off training camp practices Monday after not receiving test results from Friday.

Astros general manager James Click said the delay in testing results and the contagious nature of the coronavirus led to the decision to cancel a full day of workouts.

“Despite these delays over the holiday weekend, we’re optimistic that the this process will be ironed out and we’ll be back on the field and ready to compete for a championship soon,” Click said.

MLB said in a statement that 95% of its intake testing had been completed and that the Utah laboratory it’s using had reported 98% of results, a majority of those a day after samples were collected. MLB said it addressed delays caused by the holiday weekend, doesn’t expect them to continue and commended teams for canceling workouts.

The full 60-game regular season schedule for all teams will be announced at 6 p.m. Monday on the MLB Network. The world champion Nationals are reportedly playing the New York Yankees at home on July 23. 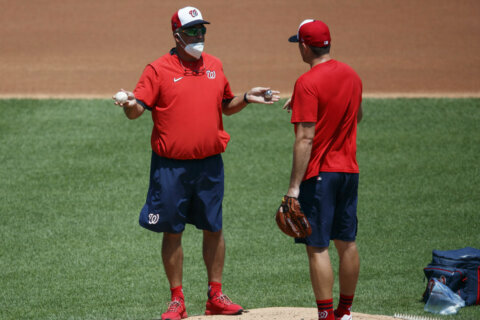 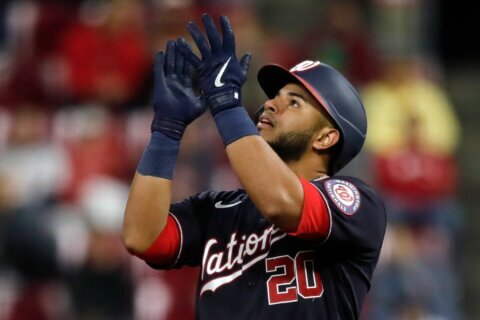