About 2,800 Nationals fans gathered at The Anthem on The Wharf in D.C. to view the premiere of the World Series Documentary.
(1/5) 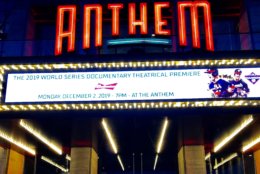 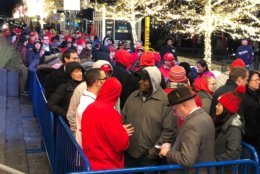 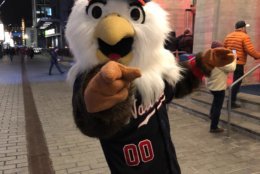 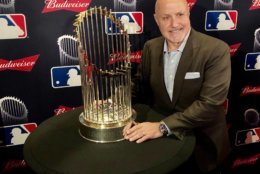 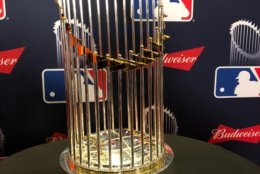 On a cold Monday night in December, Nationals fans came to see the Boys of Summer one more time before the winter pushes out their greatest baseball season till next year.

About 2,800 Nationals fans gathered at The Anthem on The Wharf in Southwest D.C. to view the premiere of the World Series documentary and have their pictures taken with The Commissioner’s Trophy.

Dressed in Nationals gear, they cheered, they booed and they laughed. And in the end, some did the Baby Shark.

Christopher from Reston, Virginia, said he attended the premiere “to celebrate the Nats’ victory, relive all the great moments.”

Justin, from Burke, grew up in the area.

“It’s great to first see the Caps, then the Mystics and the Nats win finally. I’m celebrating with my friends. For a while, I was one of those believers in the D.C. Curse, so it was great to see the curse broken, and now we’re the District of Champions,” he said.

The engineer of the Nationals’ championship was General Manager Mike Rizzo. He feels what it has meant to the nation’s capital, following on the heels of the Capitals’ and Mystics’ titles.

“It’s been quite a ride for the last couple of years after a real drought of winning sports here. So, I think it’s very emotional to a lot of people,” Rizzo said.

“I get stopped along the street all the time to snap a photo or to sign an autograph, or someone just shaking my hand. It’s really incredible what the District has done for us. They’ve really embraced this thing and it’s the greatest moment of my sports career.”

First baseman Ryan Zimmerman echoed those feelings. He’s been a part of all 15 Nationals seasons, for better and worse, so he’s certainly enjoying the moment.

“Obviously being here as long as I have, going through some of the bad times, it’s a special group of guys, so much fun to do it with that group and what we went through,” Zimmerman said.

It has meant so much to Nationals Principal Owner Mark Lerner that he admits he’s still absorbing it all, and watches YouTube videos to believe it.

“It matches every dream I had, except the Nats didn’t clinch at home,” Lerner said.

Both Lerner and Rizzo admit they get emotional when they think how important it was to win the World Series for their fathers, both in their nineties.

Lerner says clinching the National League Pennant on Ted Lerner’s 94th birthday meant more to him than almost anything.

Rizzo admits it all hasn’t fully sunk in yet.

“It kind of sinks in periodically and then you go about your daily business. We have the business of the 2020 season ahead of us. We dove into it two days after the World Series,” Rizzo said.

“They don’t give you a whole lot of time on the baseball calendar to sit on your laurels. Every so often, though, when you see a commercial or see some highlights, you get a little tear in your eye.”

Nats fans will certainly get some chills when they view the World Series documentary. It includes lots of behind-the-scenes footage, different camera angles, player insight, reaction to key plays, plus great close-ups of the drama and intensity.

The Blu-ray and DVD of the documentary go on sale this week.

Before the documentary played, there was an onstage Q&A.

Zimmerman said he saw Eric Church at The Anthem last week and now knows what it feels like to be Eric Church.

No disrespect to Church, but Church will never know what it feels like to be Zimmerman — not only the face of the franchise, but now a world champion.