One week from hard trade deadline, where Nats and others go from here

With no August trade period this year, the July 31 MLB trade deadline takes on added significance. But with teams waiting until the very last minute to buy and sell, will the Nats get what they need for the stretch run?

The Major League Baseball trade deadline is just a week away, and this year it means a little more.

Increasingly over the last decade, teams made use of the August 31 waiver deadline to wait deeper into the season to buy and sell. The shift in valuation of contracts, especially for highly-paid veterans, made them easier to sneak through the waiver process without another team claiming them and blocking a potential trade.

Now, there is only one trade deadline: 4 p.m. ET on Wednesday, July 31, by which all deals must be submitted to the league.

But that earlier cutoff has not led to a more active July to date, with the reported asking price on prized acquisitions said to be astronomical. That could make for a frantic next week as the Washington Nationals and other contenders try to patch up their holes for the stretch run and the postseason.

But exactly who is a buyer and who is a seller is still largely unclear.

The National League is a mess right now, with really only one team — the Los Angeles Dodgers — virtually assured of more than a single postseason game. The Atlanta Braves range between 78-83%, depending on your projection system of choice, to win the NL East, but the Central and the two Wild Cards are very much up in the air, with seven teams over .500 and within two games of one of the final three playoff spots, as of Tuesday night.

That may be why the postseason odds for the Nats are so widely variant. Going into Tuesday night’s game against Colorado, FanGraphs was most optimistic at 79% (18.3% to win the division), FiveThirtyEight less so at 62% (16% for the NL East), and Baseball Reference at just 45.1/7.6%.

More contending teams means fewer sellers and, therefore, fewer available players, tightening the market and raising the asking price for those remaining. Perhaps that explains what has been a very slow trade season thus far, despite the lack of an August period in which to make deals. But, as usual, every contender could use more pitching, and that could lead to a frantic final few days before the end of July as teams accept their fates as buyers or sellers.

The situation is particularly problematic for the Nats, with the most obvious NL sellers both being in the division, in the Mets and Marlins. The San Francisco Giants’ recent surge has, at least temporarily, seemingly taken Madison Bumgarner and bullpen options like Will Smith, Sam Dyson, Tony Watson and Mark Melancon off the board.

Recent reports have linked the Nats to Orioles reliever Mychal Givens and Royals reliever Jake Diekman, both veterans with solid, if unspectacular, tack records. Diekman’s walk rate (5.2/9 IP this season, 4.9/9 IP career) is enough to give pause, despite a career-best 13.4 K/9 IP. But his $2.25 million salary is nearly identical to Givens’ $2.15 million, meaning the Nats would be on the hook for less than $1 million with either player.

This is critical given ownership’s desire to get under the luxury tax this year, creating a reset after going over each of the last two seasons. A third infraction would cost them 50% on any payroll over the threshold this season and in any future seasons until the reset.

Givens also reaches arbitration for the first time this offseason, meaning he’s under control for three more years after 2019. This means he might cost the Nats a bit more in prospect stock, but he fits into what GM Mike Rizzo said he was looking for, in a player they are able to keep beyond this year. Detroit’s Shane Greene (1.25 ERA, 0.86 WHIP, 22 saves) is another potential target who comes with an additional year of team control, but with the aforementioned logjam of teams on the fence, his services will be in high demand.

Whoever the Nats target, it seems clear that the reclamation project approach they’ve taken to this point isn’t going to be sufficient to build the kind of bullpen that can get them through — or even to — October. Fernando Rodney, 42, has posted a respectable 3.52 ERA but a 1.70 WHIP since joining the club. Jonny Venters, a three-time Tommy John surgery recipient, lasted 3.1 innings in a Nats uniform before landing on the Injured List.

The existing bullpen has at least gotten the collective ERA back down under 6.00 (still last in MLB at 5.93 entering Tuesday), but hasn’t exactly been inspiring.

Wander Suero’s FIP (3.22) suggests he’s been better than his 5.19 ERA, but Matt Grace’s numbers (5.11/6.00) aren’t nearly as hopeful. Since his great start, Tanner Rainey has walked 13 batters and posted a 6.94 ERA over his last 11.2 innings. Javy Guerra’s allowed multiple runs in three of his last eight outings, allowing 15 base runners while recoding just 19 outs over that stretch.

It might be worth looking for cheap reinforcements around the edges of the offense, as well. The Nats don’t seem positioned to make any major replacements, but with Ryan Zimmerman hurting again and Wilmer Difo not proving to be the bench infielder the club was hoping for, they could use some depth. They might find a potentially cheap piece in Toronto utilityman Eric Sogard (disclosure: Sogard played for a team the author worked for in the minors).

Sogard has played five different defensive position for the Jays and slashed .304/.367/.487 in just over 300 plate appearances. He is got a very good command of the strike zone, and the livelier baseball seems to be augmenting his gap power, leading to his first double-digit home run season since he was in the California League. A 33-year-old veteran left-handed bat with postseason experience on a minimum contract, he’d cost only a couple hundred thousand dollars in salary and wouldn’t command much of a prospect haul in return. He’d be able to spell a number of players down the stretch and offer the positional versatility to match up in a number of ways late in ballgames.

That could be key, because the Nats still haven’t really proven themselves against contending teams, despite their hot stretch before the All-Star break that got them back in the hunt. They won five of six against Philadelphia, but against other non-bottom feeders during that stretch, they weren’t particularly impressive.

While August brings a mixed bag of good teams and bad, September is lining up to be an absolute terror.

In their final seven series (24 games), the Nats play the Braves seven times, the Phillies five times in four days, both the Twins and Cardinals on the road for three apiece, and they close with the Indians at home for three, quite possibly with Corey Kluber back in the fold. Other than three games in Miami before the final homestand, there are not a whole lot of easy wins in that stretch, all against teams potentially still playing for something.

If the Nationals are going to make a push to ensure there is October baseball in the District, they’ll need to start winning more series from better teams. That starts by addressing their biggest needs in the next week. 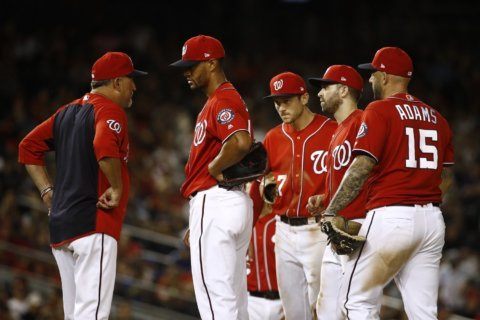 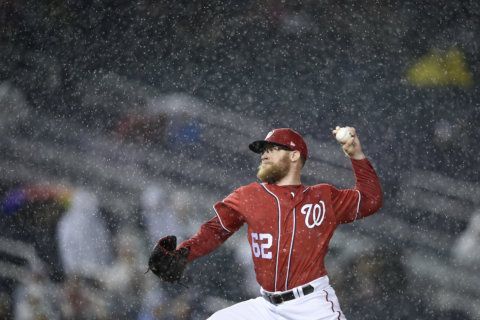 What happened to all the Nationals’ good relief arms?