A healthy Wieters hopes for turnaround in second season with Nats

Coming off the worst season of his career, Matt Wieters is back in camp healthy and hoping to put together a better year at the plate — not just behind it.
Listen now to WTOP News WTOP.com | Alexa | Google Home | WTOP App | 103.5 FM
(1/4) 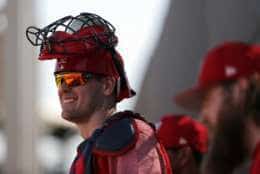 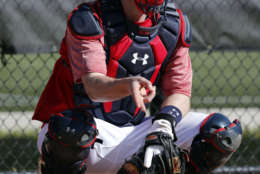 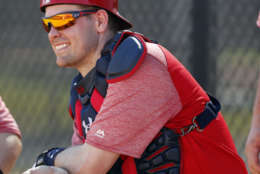 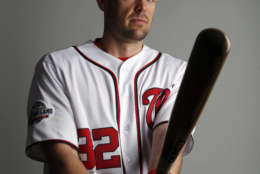 WEST PALM BEACH, Fla. — Nationals catcher Matt Wieters is coming off the worst season of his career, but he’s not letting it get him down.

Instead, he’s looking to turn a negative into a positive as he enters his second season in D.C.

“Every year is different,” he said at camp Thursday. “You learn from all your experiences — good and bad — and that’s what helps you. What I always feel makes veteran players so valuable in a clubhouse is that they know what they’ve done well and haven’t done well. The best athletes in the world have the ability to adjust.”

Wieters had to adjust following Tommy John surgery in 2014, and then again in 2017, his first season playing for a team other than the Orioles. He was signed by the Nats right after spring training opened, when he was also recovering from an offseason cut on his wrist.

“Going through it, you don’t feel like that,” he said. “But then realizing how good I feel coming in this year, and how much easier it is for me to recover before the next day, it was definitely a different offseason. I definitely feel I can give it more this year than I could last year.”

Wieters disagrees that he wore down as the season progressed. He played in 123 games, but that was nothing new.

“Before Tommy John, I was routinely catching 135 to 140 and I like that. But everything kind of evolves. I want to play as many as I can where I’m as effective as I can to help the team. I’m not going to get hung up on a number, saying I have to play this many games. I just want to be in as good of shape to where, if needed, I can play any given day.”

Familiarity with the pitching staff should help. Last season was a learning experience for Wieters. Now, he said, he can build on that.

“It’s really freed me up to put some more time into hitting. As a catcher, your first responsibility is always to handle the staff, get the staff ready, and I really enjoyed doing it last year. This year, I just feel a little bit more comfortable where I can have some more time in the cage and work with [new hitting coach] Kevin Long, and I’m excited about that.”

Long had good things to say about Wieters’ progress.

“We’re well on our way to getting him to where he needs to be,” said Long. “He’s done a lot of things so far, made some adjustments, and he feels pretty sexy about what he’s doing.”

“Sexy” or not, Wieters is definitely leaner. He dropped 15 pounds, reporting to spring training at 225, his rookie weight.

“The good thing about the offseason workout is I was able to do everything,” he said. “I wasn’t rehabbing any one part, so I was able to give complete attention to my total body. The last three offseasons, it’s been a focal point, whether it’s been the elbow or the wrist. It’s always been something I’ve been focused on.”

The Nationals pitchers love when he calls a game. If Wieters can bring a little more offense, it would certainly add more punch to an already-solid lineup.

Tommy Milone will start Friday’s first preseason game against the Astros as the co-tenants in West Palm Beach open up Grapefruit League play. This is the second go-round for Milone in Washington, after making his Major League debut with the Nationals in September 2011 against the Mets. He hit a three-run homer on the first pitch he saw but did not get the win, as he didn’t make it through five innings. Malone was part of the Gio Gonzalez trade that winter and pitched briefly with the Mets last season.

Minor league outfielder Ryan Raburn got loud cheers from his teammates when he belted a home run off the bullpen roof in left field during batting practice. Unofficially, the blast was over 400 feet.