WEST PALM BEACH, Fla. — There’s a saying that you can’t change the past, but you can change the future. Nationals pitcher Gio Gonzalez is trying to live by that motto.

Four months after Washington’s playoff meltdown in Game 5 of the NLDS, Gonzalez is back to being one of the most friendly players in all of baseball.

“I didn’t think about it as much,” he said of the end of last season. “It’s something we don’t even want to talk about. It’s pointless, because it’s not like we’re going out to lose.”

Gonzalez and the Nationals are 0-for-4 in the first round of the playoffs, unable to advance out of the NLDS. As frustrating as that is, the lefty keeps things in perspective.

“The fact is, we’re there. We’re making it to the playoffs. Not too many teams can say that. Talk to the other teams who are not getting over the hump. We’re actually playing in the postseason.”

Gonzalez pointed to the Nationals co-tenants in West Palm Beach, who just won the World Series.

“Give credit to the teams that are winning it. The Astros kicked ass this year. What a lineup, what a pitching staff. Give them credit they deserve.”

There’s no jealousy, just admiration for what Houston accomplished.

“It’s beautiful, because we get to be in a Spring Training facility with guys I remember in that organization when they were coming up. They’re rock stars now. They deserve it and they’re humble guys. It’s pretty cool to be right next door to the team that just won it all.”

The Nationals, meanwhile, are still searching for that successful postseason formula. Gonzalez is now playing for his fourth manager since arriving in D.C. before the 2012 season. Dave Martinez is another skipper he has to impress. To prepare, he had an intensive offseason workout.

“I wanted to show I can still do what I do, still hang with the young kids,” said Gonzalez.

“Now, it’s just getting healthy and having fun. That’s what Dave brought, putting the music out there, keeping us loose, understanding it’s a long game and they want you to enjoy every bit of it.”

The goal, of course, is to enjoy it as much as their next door neighbor in West Palm Beach.

The Nationals dropped their preseason opener to the Astros 3-2 in front of a paid crowd of 4,271. Tommy Milone started and pitched two scoreless innings, striking out three.Top prospect Victor Robles walked, doubled and made a diving catch in center field.

General Manager Mike Rizzo said he believes Daniel Murphy and Adam Eaton are both on track to be in the Opening Day lineup. Both are rehabbing from knee surgeries. 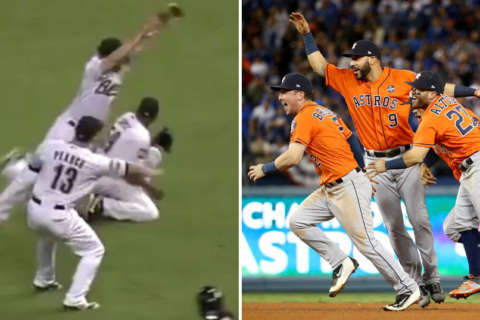 Tracing the Astros’ success from their lowest point, against the Nats 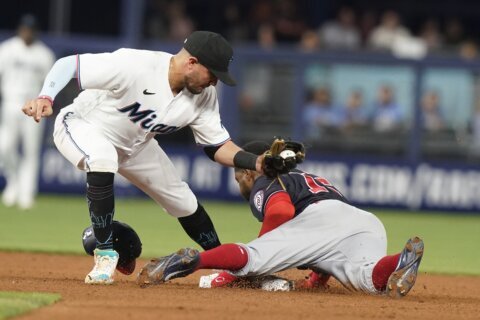