The Nationals' Triple-A affiliate is being sold to the division-rival New York Mets. What does that mean for 2018 and beyond?

WASHINGTON — Aside from the occasional buzzworthy prospect or promotion, most people don’t pay the minor leagues too much attention. But a situation is brewing between the Washington Nationals and New York Mets that may leave the Nats’ Triple-A affiliate in Syracuse in a bizarre limbo for the 2018 season.

The Nationals are affiliated with the Syracuse Chiefs and have been since 2009. This means the big league club is charged with providing the players and field staff, while the day-to-day business operation is under separate ownership. But the Chiefs have been sold, provisionally, to the New York Mets, in a deal that has had to be approved by its shareholders (it’s a long story, but the team is essentially owned by the community, which sold shares for as little as $10 a piece decades ago to keep the team in town; those shares will be worth $1,400 each when the team is sold) at a meeting Friday afternoon. But the Chiefs are still under contract as a Nationals’ affiliate for next season, meaning the team will be owned by one Major League organization and staffed on the field by a division rival.

So, how did we get to this point?

Major League teams sign Player Development Contracts (PDCs) with minor league clubs, lasting either two or four years. These PDCs are often renewed without too much thought, but when a team wants to try to forge a more geographically advantageous partnership — putting an affiliate within driving distance, to allow for easy rehabilitation assignments and transfers to and from the big league club, in case of injury — it often causes a cascade of dominoes around the minors.

This happened in 2009, when the Los Angeles Dodgers left Las Vegas for Albuquerque. The Miami Marlins, who had been in New Mexico, bolted for New Orleans, booting out the Mets, who went to Buffalo. That moved the Cleveland Indians, who had been in Buffalo, to Columbus, kicking out the Nationals, who grabbed Syracuse. The former tenants in Syracuse — the Toronto Blue Jays — were left holding the short stick in this insane game of musical chairs and mixed metaphors, and ended up, yes, in Las Vegas.

One can see why the Blue Jays would not want their Triple-A affiliate nearly as far away from Toronto as possible. Factor in the prospect of your highest prospects regularly playing in 110-degree heat in one of the most beat-up ballparks in the minors, and the destination becomes even less desirable. That’s why the Jays moved to Buffalo as quickly as they could (2013), which left the Mets holding Vegas. And that about catches us up to present day.

Randy Mobley, president of the International League, in which the Chiefs play, is anticipating the Nationals playing in Syracuse in 2018, despite the ownership change.

“That’s the position that I am taking at this moment,” Mobley told WTOP. “It’s one of those things that if, by chance, all parties agree to something other than that, then I could think that that could probably prevail.”

What Mobley means is that, if the Nationals and Chiefs mutually agreed, they could break their contract to allow the Mets to take over in Syracuse this year and have the Nats move to Las Vegas (if the Mets and 51s also came to the same agreement). This is the point where a reasonable person might suggest that the Nationals and Mets simply switch their minor league affiliations a year early. And this is where things start to get complicated, not just for the 2018 season, but the longer term future as well.

With the purchase of the Chiefs, the Mets have already announced their intent to move to Syracuse when their PDC in Vegas ends after the 2018 season. But moving to Las Vegas is a nightmare scenario for Washington. For all the reasons listed above, it makes even less sense for Washington than the odd situation they’re faced with right now. Unsurprisingly, willingly going there for 2018 seems highly unlikely.

When asked about any impending issues or if the teams were in discussions to potentially make a pre-emptive affiliation change, both the Nationals and Mets declined to comment.

“I am not aware of any conversation between any of the parties to that end,” Mobley said.

That leaves the Nats with a year to try to figure out a better long-term solution, lest they get stuck with a Triple-A club 2,500 miles from home. The options are somewhat limited, unless they force out another existing tenant (Rochester? Durham?) without strong ties to its parent club. But that’s an issue for next year.

Chiefs president Jason Smorol is planning for the Nationals to be in Syracuse in 2018. Smorol was adamant that his operation wouldn’t change, no matter who is in charge.

“Our approach does not change,” he said in an email, stressing the Chiefs would operate as usual. “We have a great relationship with the Nat’s (sic) and we will continue that for this season.”

One could certainly see why the Nationals wouldn’t want to send their top prospects or Major League rehab assignments there, though.

“The Nats need to do what’s best for them,” said Lindsay Kramer, who has been covering the proceedings for the Syracuse Post-Standard. “They might send Strasburg to Class-A or Double-A that are closer to home … (but) I can’t imagine them sending them to Potomac instead of Syracuse, just out of spite.”

On the other side of the coin, the Chiefs have a promotional schedule to put together, one that minor league clubs often try to leverage their Major League affiliation for. Last year, the Chiefs featured promotions including an appearance by the Nationals’ Racing Presidents, as well as bobblehead giveaways of Turner and Stephen Strasburg. It is unclear what effect the affiliation switch might have on the promotional calendar and whether the Mets would want to be running Nationals-themed promotions. An early first indicator as to the direction the Chiefs will take may come when the team announces its featured speakers for its annual Hot Stove Dinner, taking place Dec. 8.

While the 2018 promotional schedule won’t be announced until early next year, however it shakes out, Mobley isn’t worried about things from his end.

“From my perspective, there is no concern,” he said. “I think this is best labeled as being out of the ordinary.”

This situation has never occurred in the International League, but has happened before at lower levels of the minors. Most recently, Fenway Sports Group, which owns the Boston Red Sox, bought the then-Houston Astros affiliate Salem Avalanche in 2007. The team played as an Astros affiliate that season before switching affiliations to the Red Sox in 2008. Of course, the parent clubs were in separate leagues at that time, not division rivals. But because the Mets’ Triple-A affiliate isn’t local, Kramer doesn’t anticipate on-field conflicts of interest.

“I think it would be different if the Mets were in the same [International League] division, in Rochester or Buffalo,” he said.

Regardless of where the Nats end up in 2019 and beyond, the Mets have declared Syracuse is their future Triple-A home. It’s a home the two rivals will tenuously share next year. 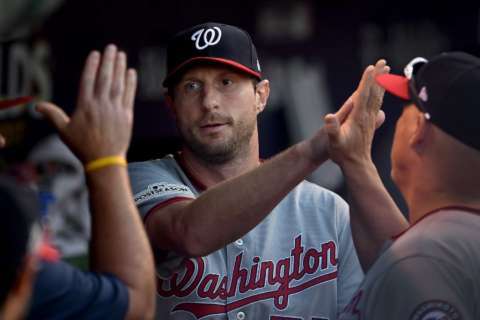