Ever since it opened as a first-of-its-kind multipurpose facility in 1961, RFK Stadium has seen its share of memorable and even historic baseball moments. WTOP sports reporter Andy Pollin relives some of the high and low points — from JFK throwing out an opening pitch in 1962, to the Washington Senators' ill-fated last game against the Yankees when fed-up fans stormed the infield.
Listen now to WTOP News WTOP.com | Alexa | Google Home | WTOP App | 103.5 FM
(1/22) 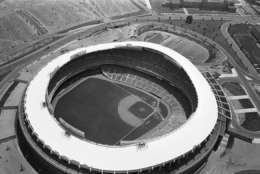 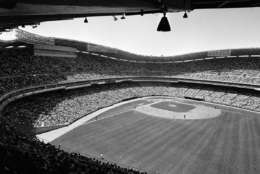 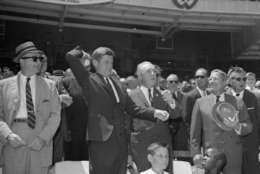 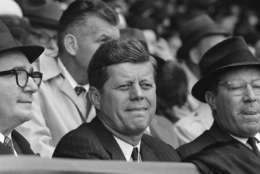 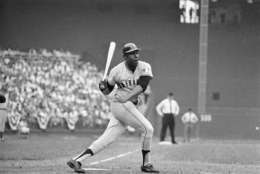 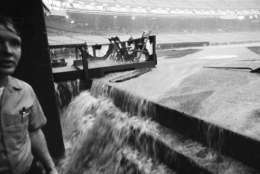 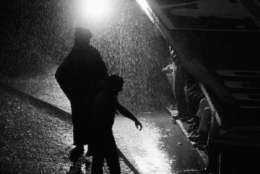 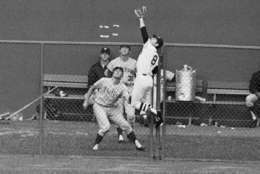 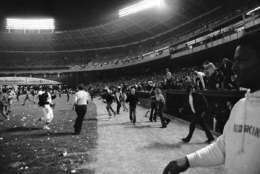 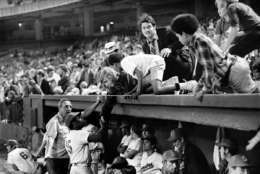 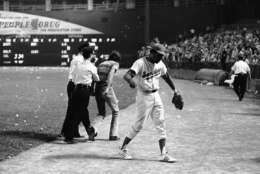 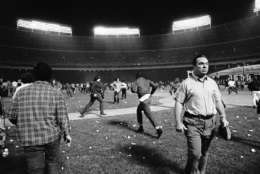 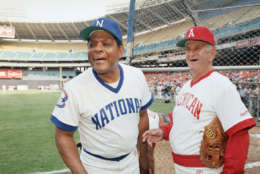 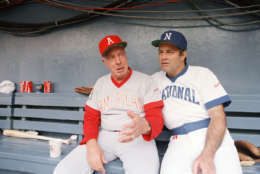 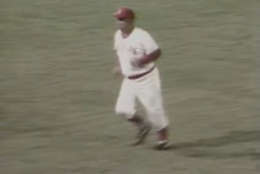 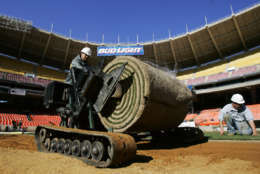 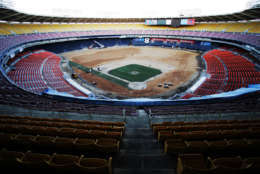 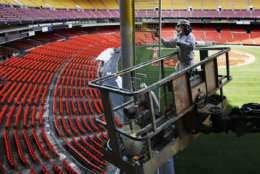 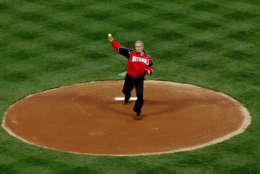 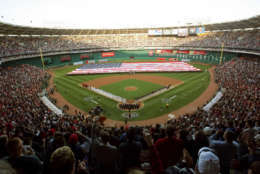 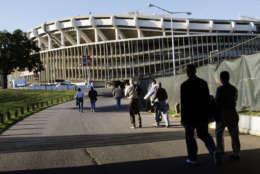 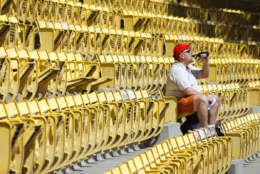 Editor’s Note: Another chapter ends this weekend for D.C.’s historic RFK Stadium, with the final DC United game on Oct. 22. While it will no longer be the home of DC United, the stadium will continue to be used for events. WTOP takes a look back at the amazing memories made there over the past 56 years. Check out more from our special report, Remembering RFK.

WASHINGTON — I’m 7 years old and my dad takes me to the D.C. Stadium. My first game. I’m going in this long, dark tunnel underneath the stands, holding his hand. We walk out of the tunnel into the light. It’s huge! How green the grass was, brown the dirt. We had a black-and-white TV, so this was the first game I ever saw in color. Sat there the whole game next to my dad. He taught me how to keep score. Best day ever.

Those words should sound familiar.

With a few alterations, they come from the cattle drive scene in Billy Crystal’s 1991 movie “City Slickers.” Crystal and his buddies, played by Bruno Kirby and Daniel Stern (a local who graduated a year ahead of me at Bethesda-Chevy Chase High School), are talking about their best and worst days. I substituted D.C. Stadium for Yankee Stadium, which is the only thing that differs from my experience as a 7-year-old with my dad to Crystal’s with his. Everything else for me was exactly the way it was for Crystal, who over the years, has said the story he told in the movie was just what he experienced in real life.

D.C. Stadium was in just its fifth season as home of the Washington Senators when I walked in with my dad on that beautiful, spring Saturday afternoon in 1966. The Boston Red Sox were in town and in the program my dad bought to keep score, was the roster of each team. The Sox had two brothers on the roster — Tony and Billy Conigliaro. I thought that was cool. Kind of like Bobby and Richie Cowherd, who I hung out with after school.

If you’re a Washingtonian, you may have similar memories of walking for the first time into the same stadium that was renamed in honor of Robert F. Kennedy in 1969, a year after his death.

But unless you’re a Baby Boomer like me, it more likely involves football, not baseball. There was a sad Rosemary Woods-like gap of 33 years without a baseball tenant at RFK starting in 1971.

Yet, the fact that RFK still stood for all those years may be the biggest reason we’ve had Major League baseball back in town for the last 13 seasons.

The stadium was the first of its kind when it opened for the 1961 Redskins season: a multipurpose facility, seating 45,000 for baseball. An additional 3,000 temporary seats could be rolled in for football. A news release described it as “America’s newest stadium — and the world’s best!”

Number one — they were the replacement Washington Senators. The original team left town after the 1960 season to become the Minnesota Twins. That team was immediately replaced by the expansion Senators. The Twins went to the World Series in 1965, the new Senators were terrible. It was like replacing a yacht with a rowboat, but at least it still floated. 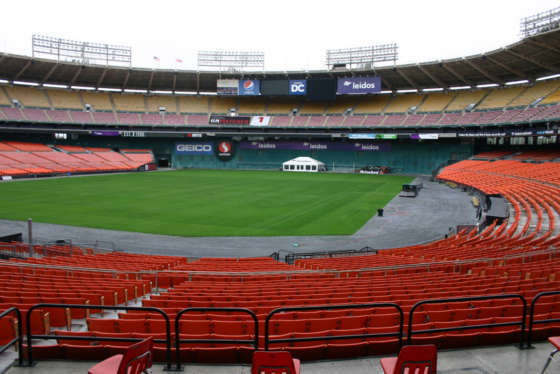 By ’62, D.C. Stadium was open for baseball business. The first game was played on April 9 and President John F. Kennedy threw out the first ball. Bennie Daniels pitched the Senators to a 4-1 win over Detroit. They won only 59 games the rest of the season, and it didn’t get much better anytime soon. “Off the Floor-in ’64!” was the headline on the cover of the team’s yearbook two years later. They did, however, deliver on the boast. The Kansas City Athletics finished dead last in the American league with 57 wins, five behind the second-to-last place Senators.

Finally, after yet another last-place finish in 1968, hope arrived in the form of the “Splendid Splinter.” Ted Williams, the last man to hit .400 and arguably the greatest hitter of all time, was hired to manage the Senators in 1969. There was talent on that team. Frank Howard had led the American league with 44 home runs in ’68. Ed Brinkman and Ken McMullen made for a strong left side of the infield and Dick Bosman was emerging as a fine young pitcher.

For a year it was magic. Williams did what no manager had come close to doing with the expansion Senators. He made them winners. The ’69 Senators finished 86-76 — a 21-win jump from the year before. Attendance went from 546,000 to 918,000. The future could not have looked brighter.

Then it all fell apart.

The Senators slunk back to last place in 1970 and attendance dropped. Owner Bob Short, looking for a drawing card, traded a slew of players including Brinkman, up-and-coming third baseman Aurelio Rodriguez and pitcher Joe Coleman, who would go on to be a 20-game winner twice to Detroit for Denny McLain. Three seasons earlier, McLain had won 31 games, but he came to Washington washed up.

The 1971 season featured McLain losing 22 games and the Senators finishing 38-and-a-half games out of first place. It paved the way for one of the most bitter moments in D.C. sports history.

In September 1971, Short received permission from the other American League owners to move the team to Texas. The last Senators game was played on the last day of the month against the Yankees at RFK.

With the help of a Howard homer, the Senators led 7-5 with two outs in the ninth. One more out and at least there would be a win to close out the Senators’ 10th and final season at RFK. But relief pitcher Joe Grzenda never got to try to get that final out. The floodgates of a fed-up fan base opened. They stormed the field, ripping up pieces of the infield and stealing players’ caps.

With no chance of order being restored, umpire Jim Honochick had to award the game to the Yankees as a forfeit, which goes in the record books as a 9-0 loss.

In between the ’62 opening-game merriment and the mayhem of the ’71 finale, the stadium hosted two All-Star Games.

The first was in ’62 and won by the National League 8-4. D.C. native Maury Wills, who starred in three sports at Cardozo High School was the game’s MVP after almost not getting into the ballpark that day. The security guard at the visitors clubhouse didn’t recognize Wills and didn’t believe the 5-foot, 11-inch, 170 pound Wills was a player, much less an All-Star. He finally talked his way in and obviously played well enough to be the star of stars. That season, Wills stole a record 104 bases for the Dodgers.

The second All-Star Game in Washington (and the last until we get another one in 2018) was played in 1969 to coincide with the 100th anniversary of Major League Baseball. The 9-3 National League victory was hardly memorable for the score, despite Howard homering for the losing team in his home ballpark.

But it’s memorable for being the last All-Star Game played in the daytime. It was scheduled for the usual Tuesday night in July, but torrential rain flooded the dugouts and forced it to be pushed to the following afternoon.

McLain — then still at the top of his game and still pitching for Detroit — was the scheduled starter. But when the game was postponed, he flew his own plane home for, get this, a Wednesday morning dental appointment. He figured he could make it back in time to start the game the in the afternoon.

But the capping of nine teeth took longer than expected and he was late getting back. When McLain finally entered the game in the fourth inning, it was out of hand. Willie McCovey took MVP honors with two home runs.

After the Senators’ departure, RFK Stadium represented the stalking horse for every team looking for its city to build them a new stadium. The San Diego Padres came close to relocating here in 1973. Topps even printed baseball cards of Padres players with the word “Washington” underneath the name. Two rounds of expansion in the late ’80s and early ’90s were supposed to bring a team back to Washington, but it didn’t happen. There was a deal to bring the Astros here, which finally fell through when Houston agreed to build the team a new ballpark.

It was the first one that made it special. The oldest of old timers, Luke Appling, was 75 years-old when he homered off Warren Spahn in 1982. Sure the left field fence was only 260 feet away. Nobody cared. It was a rare moment of hardball fun during a three-decade period of baseball-less heartbreak.

Finally, in 2004, word came that baseball was coming back, and a big reason was the on-the-move Montreal Expos had a place to go to.

By that time, the Redskins had been in their new stadium for nearly a decade and only D.C. United and a handful of annual college football games was keeping RFK from being a ghost town. But it was still standing.

With three years needed to erect a new ballpark for the newly named Nationals, RFK was given a minor baseball face-lift and gave the team a place to park itself.

From President George Bush throwing out the first ball on April 14, 2005 before a win over the Arizona Diamondbacks to a victory over the Philadelphia Phillies in the stadium finale on Sept. 23, 2007, RFK was finally home again for Major League Baseball.

Was it a great ballpark? No. Not by modern standards, or even nostalgic standards like Fenway Park or Wrigley Field.

Just ask Ryan Zimmerman. The only current National to call RFK home put it this way before heading to Nationals Park, which he christened with a walk-off homer in the first game there in 2008.

“I’m not going to say we’re going to miss [RFK], because we won’t,” he said. “They did a great job with what they had here to make it, I guess, as good as they could for three years.”

That may be Zim’s view, but for some of us the magical memories of RFK are as bright as what I saw when I walked out of that stadium tunnel more than 50 years ago. Best day ever.